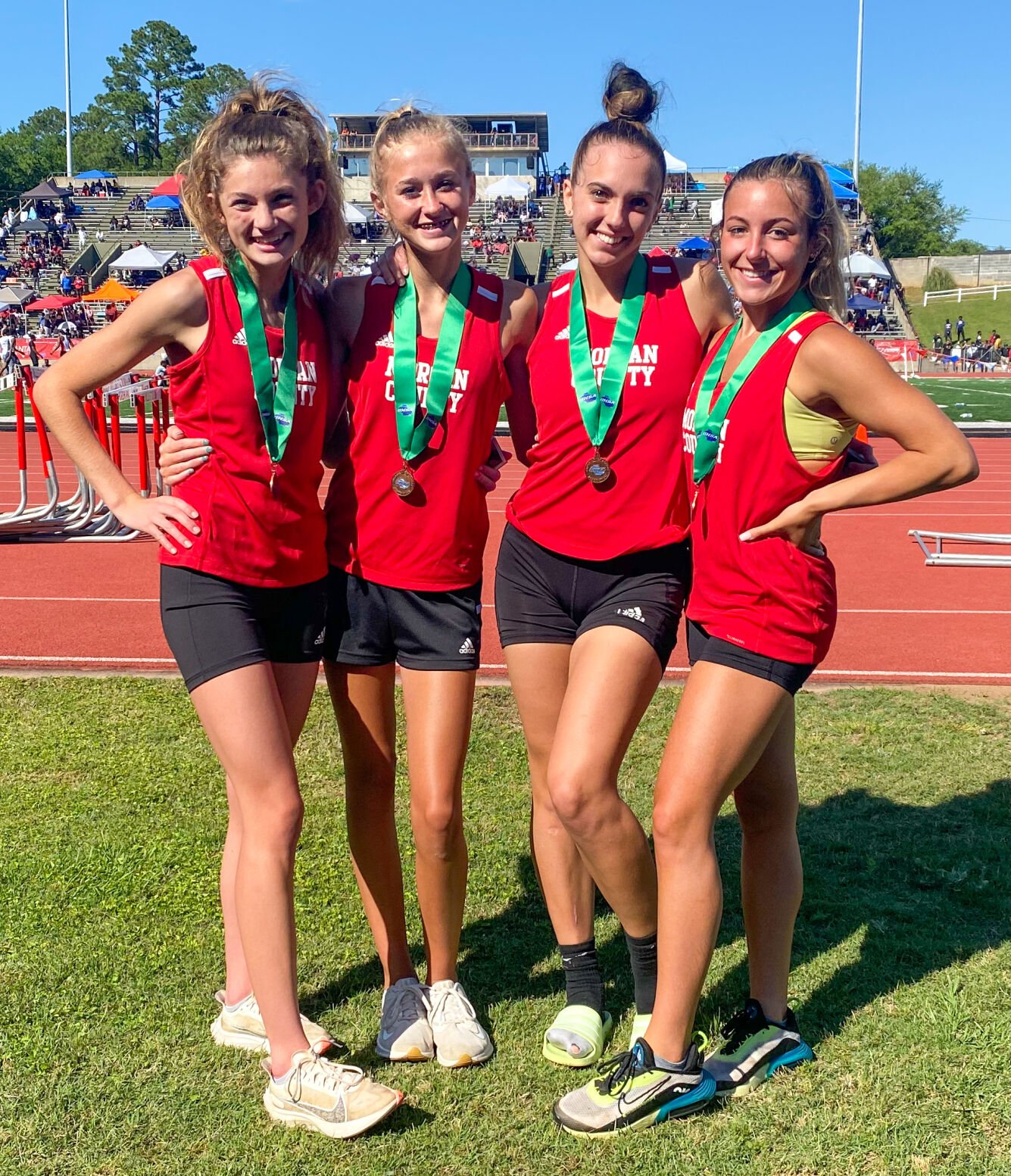 The 4x800 team of EllaRyann Cottrell, Drew Biersmith, Peyten Spain, and Annabel Moon finished in eighth place with a season best 10:52.68 which helped take the Lady Dogs into 17th place out of 35 teams at the state championship in Albany last week. 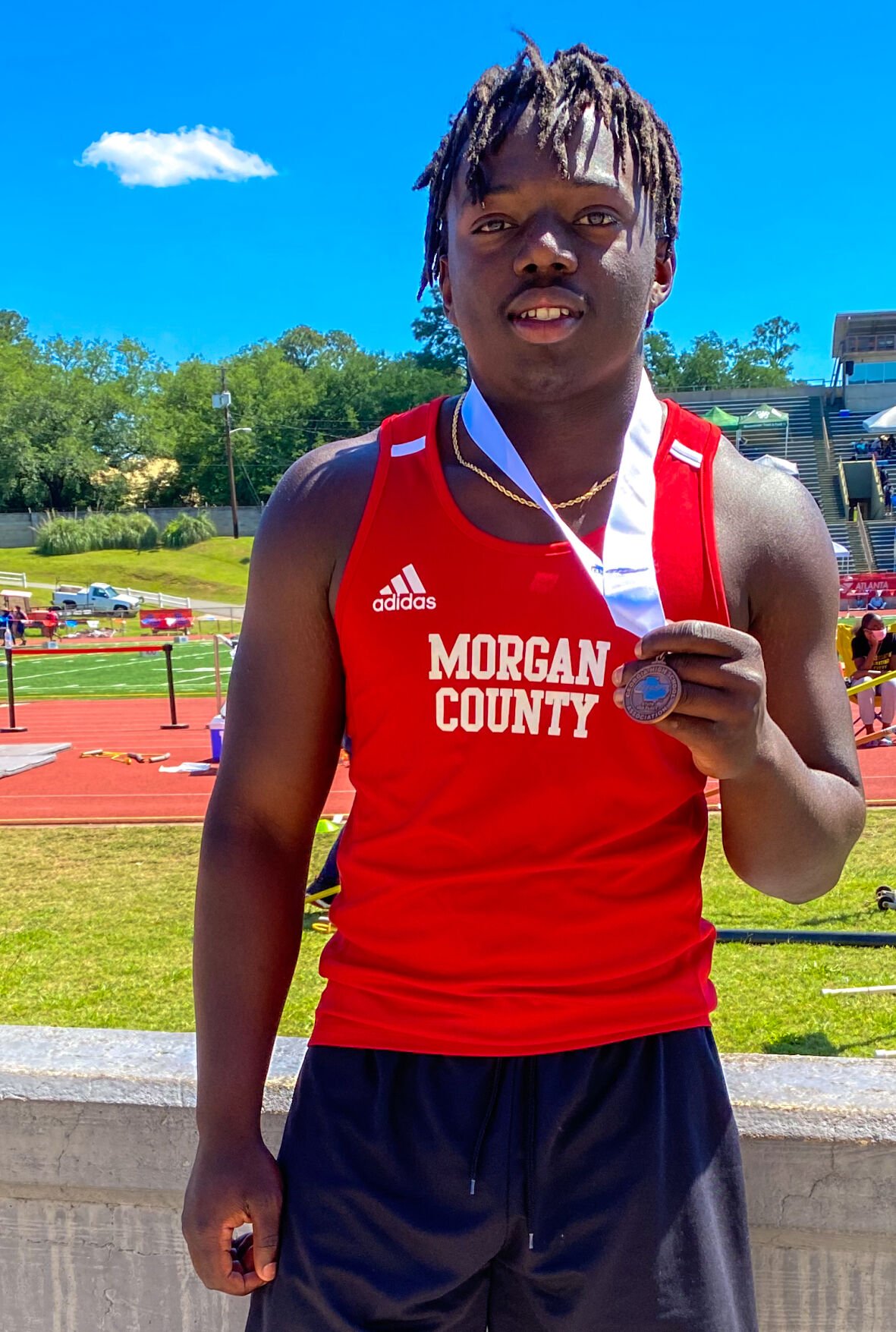 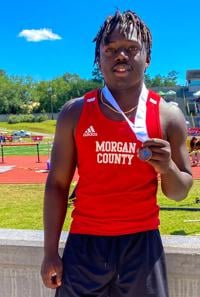 The 4x800 team of EllaRyann Cottrell, Drew Biersmith, Peyten Spain, and Annabel Moon finished in eighth place with a season best 10:52.68 which helped take the Lady Dogs into 17th place out of 35 teams at the state championship in Albany last week.

The Morgan County High School took a record number of competitors to the 2021 GHSA state track and field meet in Albany last week and the strong season continued. The future is bright for the Bulldogs with a number of sophomores taking podium positions as the boys team claimed a top 10 finish and the girls a top 20 finish at the state meet.

On the track, sophomore Joshua Jones brought home a state championship in the 300m hurdles with a 40.35 performance that trimmed over a second off his preliminary time. Omar Lizarde Noriega, another sophomore, ran a 15.73 in the 100m hurdles to finish in fourth place. The Bulldogs 4x100 team of William Jeffreys, Damien Walker, Jared Gilbert, and Rodney Stephens were 0.1 seconds off a podium finish with a 44.05.

Sophomore Jacere Cooper took third place in shot put and eighth place in discus. In the shot put, Cooper threw a 44-foot, 11.5-inch shot and missed second place by 1/2 inch. In the discus, Cooper threw a 138-5. Chance Reid finished in 15th place in the discus with a 111-8. In the long jump, William Jeffreys leapt to a third place finish with a 22-3 performance and Damien Walker jumped to 10th place with a 41-5 jump in the triple jump.

On the girls side of the card, Teeonna Wade and Alana Foster both finished on the podium. Wade used a 35-foot performance and Foster a 34-5.25 jump in the triple jump to finish in sixth and seventh place respectively. Wade also finished in ninth in the long jump with a 17-6 performance while Foster closed the event with a 16-4 and 12th place. Jamiah Cox finished in 12th place with a 33-9 performance in shot put. Destiny Hunter closed her season with a 15th place finish in the discus on the back of a 94-9 throw.

On the track, the 4x800 team of Drew Biersmith, EllaRyann Cottrell, Peyten Spain, and Annabel Moon finished in eighth place with a 10:52.68 which was a season best by more than 20 seconds. Cottrell also finished in 15th place in the girls 1600m with a 6:08.08.

The girls team closed the event in 17th place out of 35 teams while the boys finished in ninth place from 38 teams.