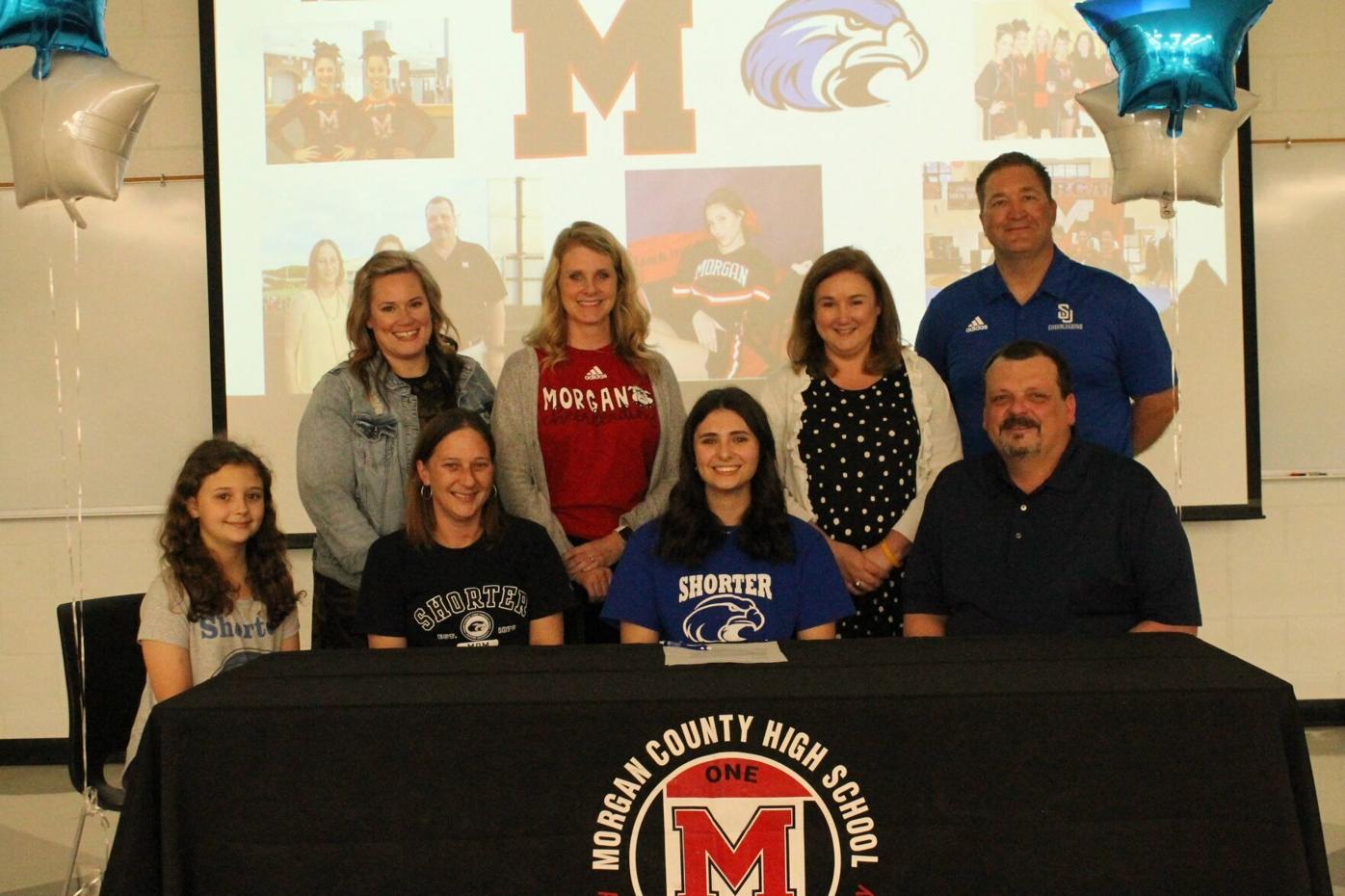 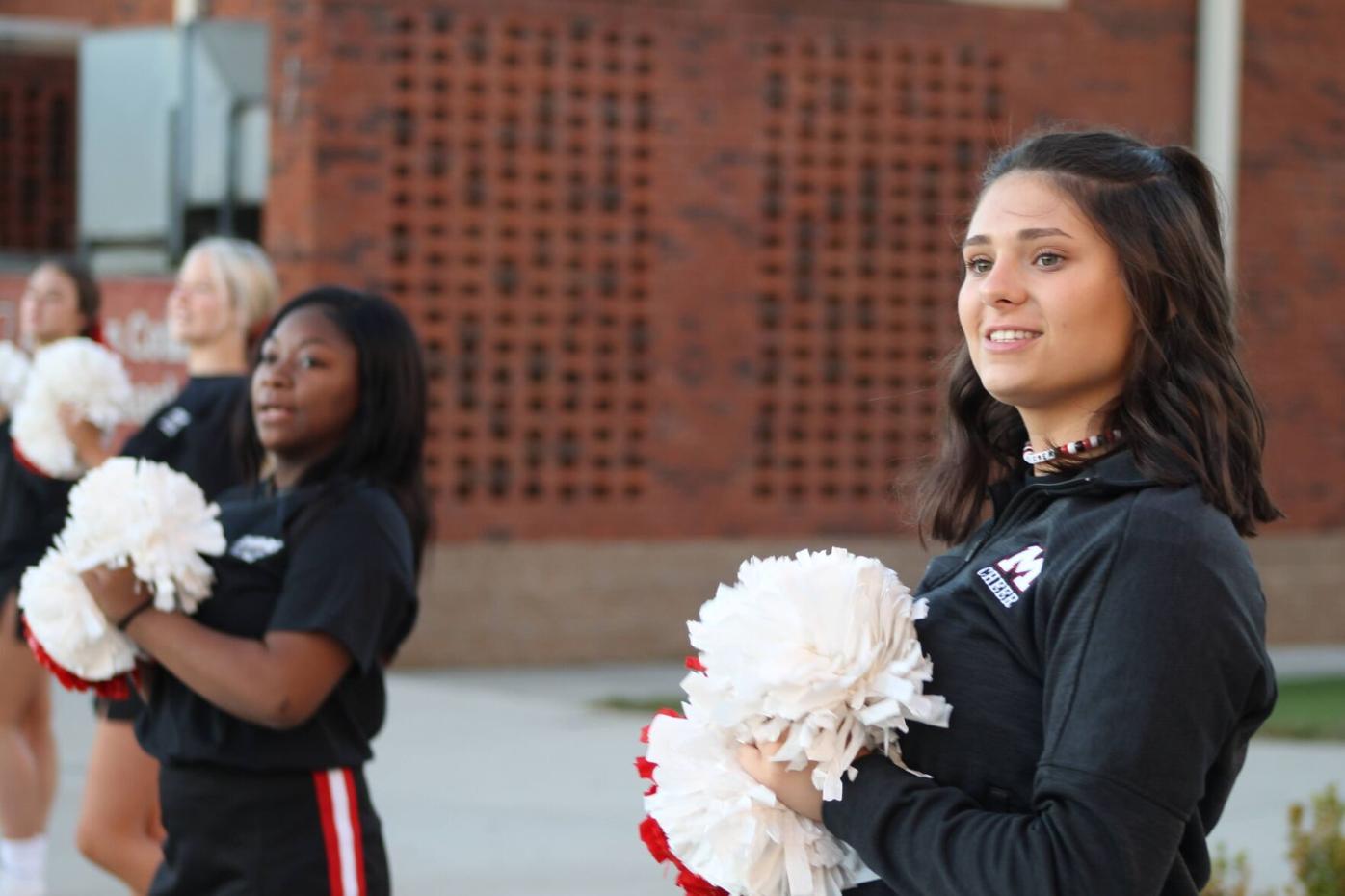 Kaitlyn Sims began cheering in the seventh grade. She has been a spirit cheerleader and a member of the competition squad at Morgan County High School for four years. 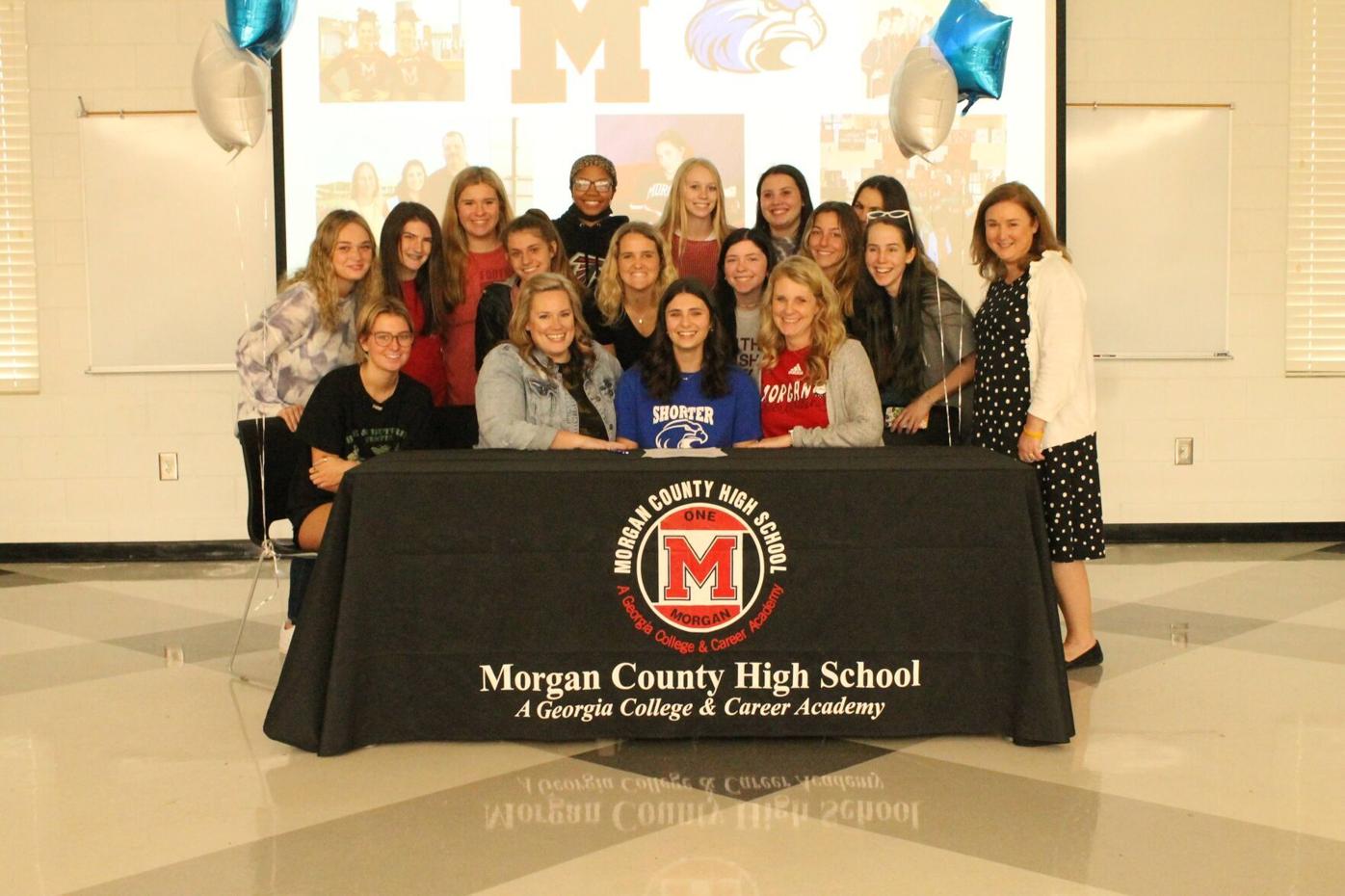 Members of the competition team join Kaitlyn Sims on her signing day with Shorter University. 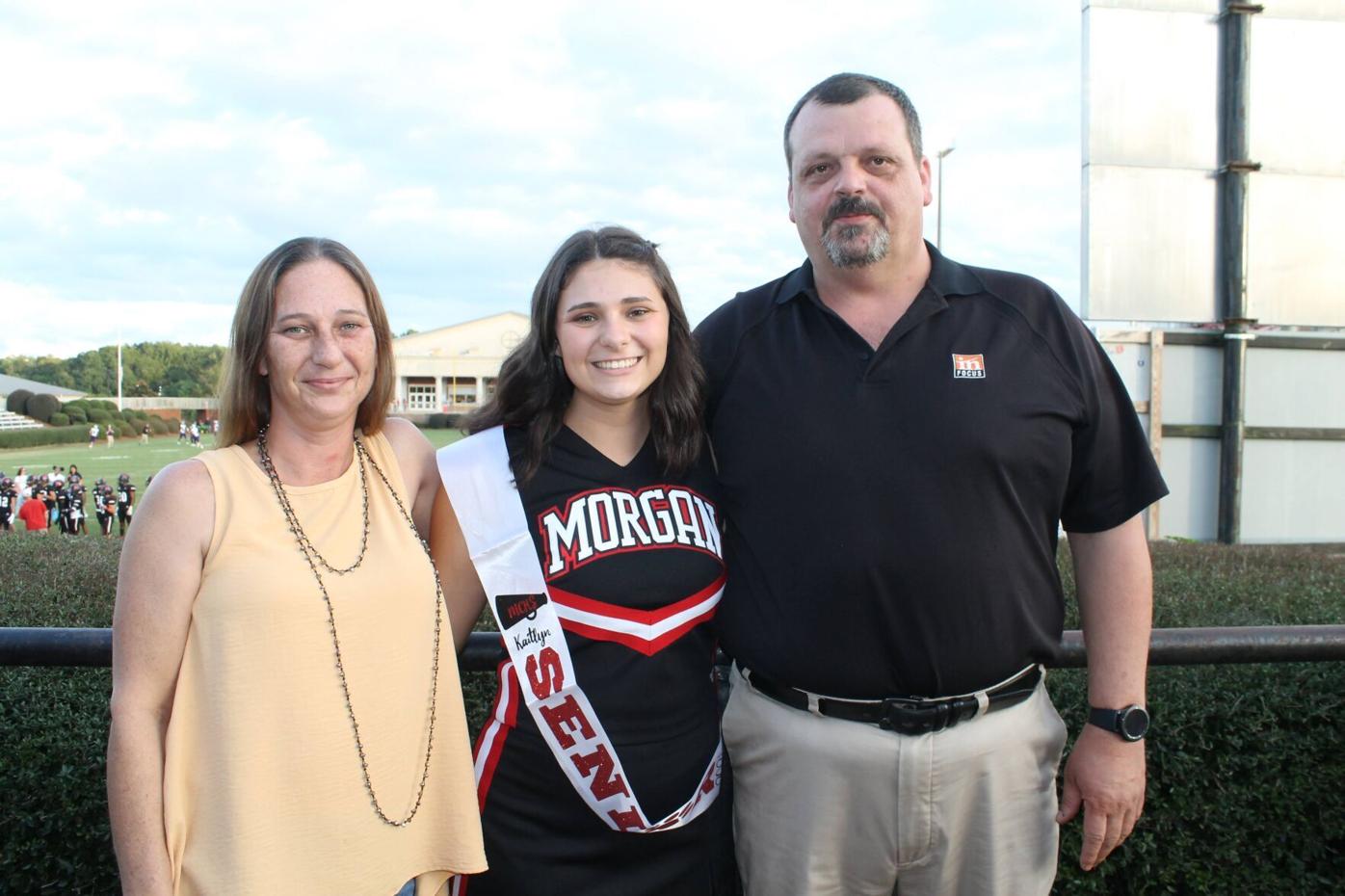 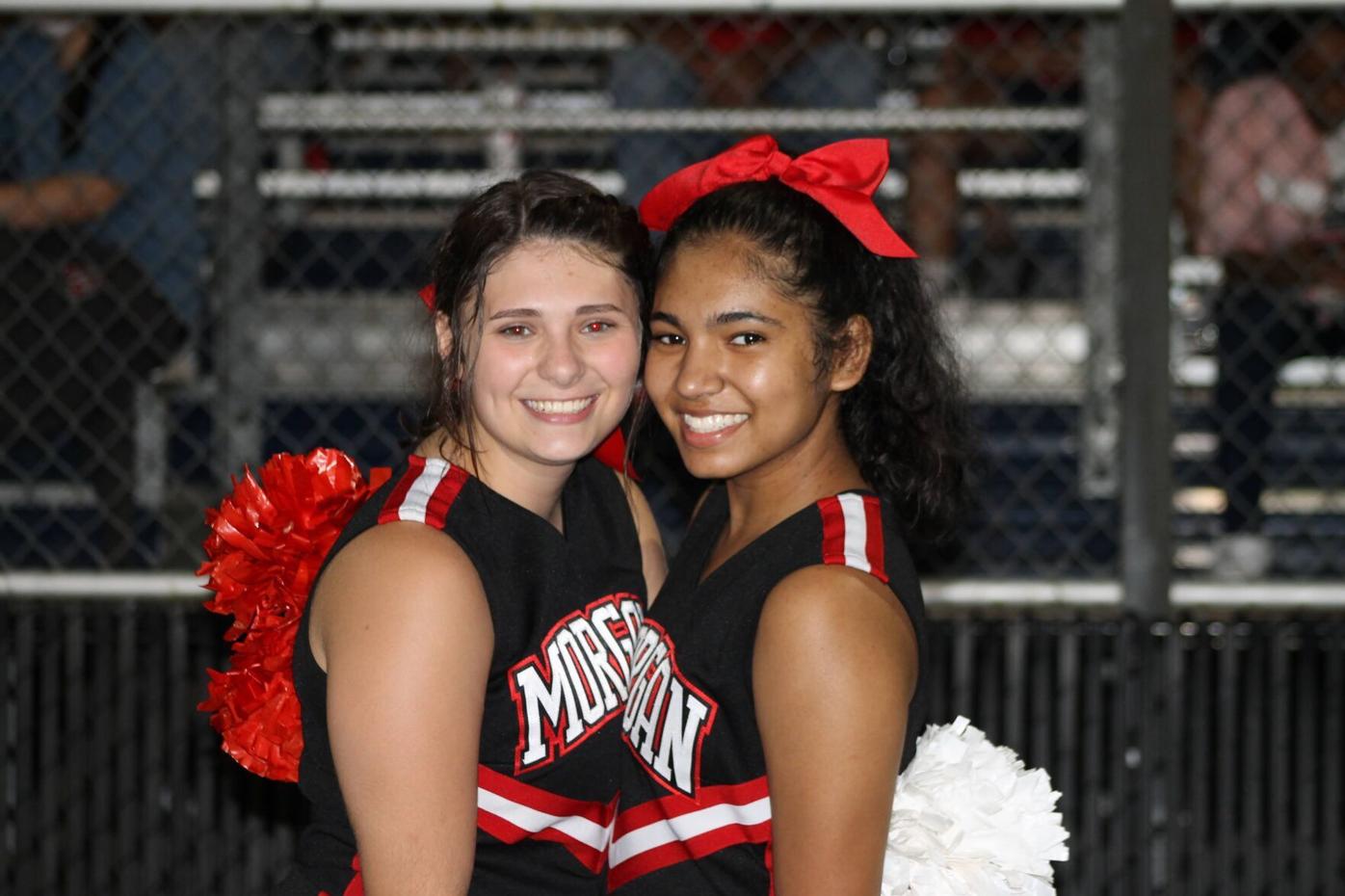 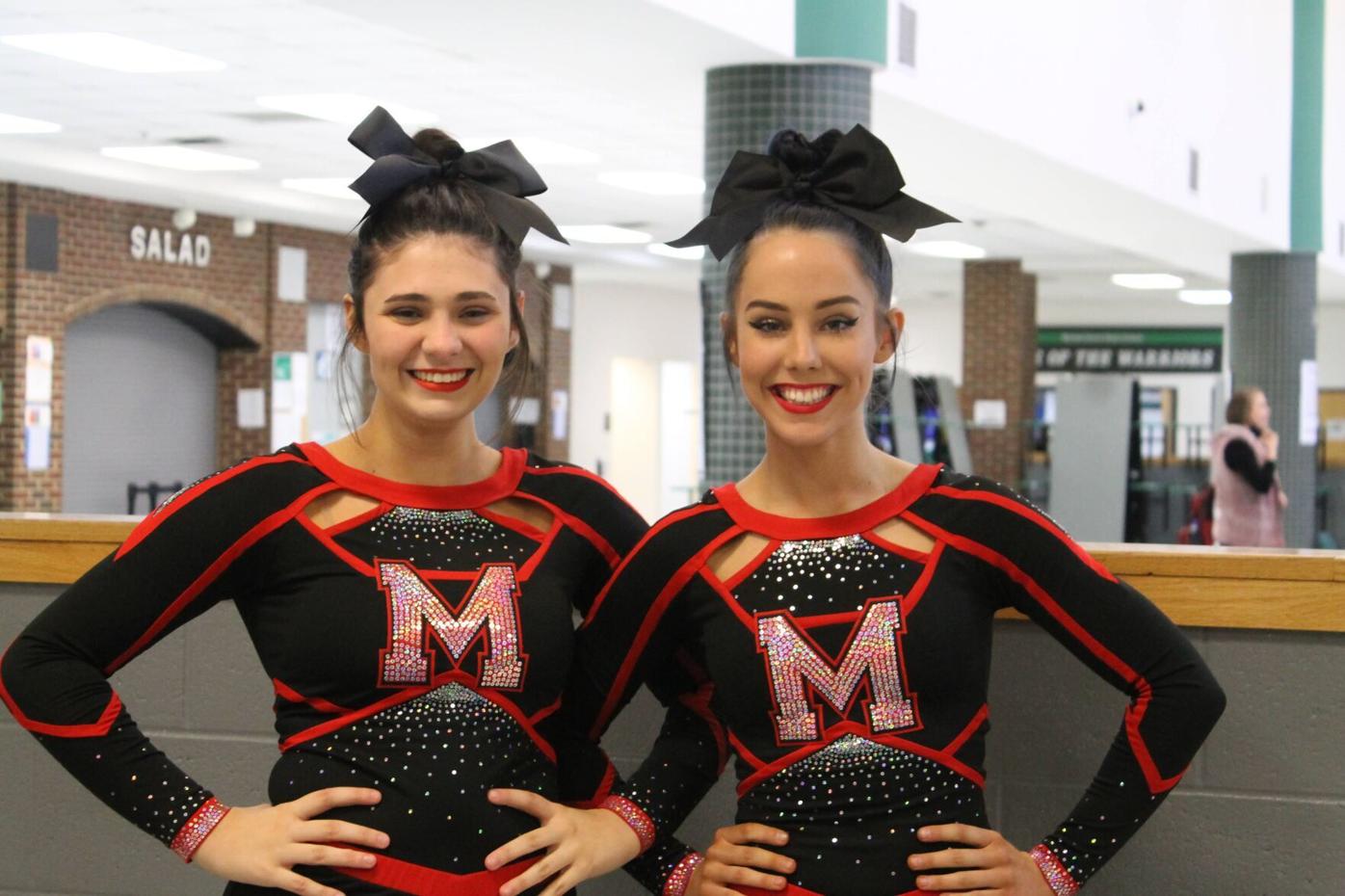 Kaitlyn Sims began cheering in the seventh grade. She has been a spirit cheerleader and a member of the competition squad at Morgan County High School for four years.

Members of the competition team join Kaitlyn Sims on her signing day with Shorter University.

Kaitlyn Sims is usually the one cheering on Morgan County High School sports teams, but this time, the school is cheering for her.

Morgan County High School (MCHS) Senior Kaitlyn Sims signed a letter of intent last week to continue her cheerleading career at Shorter University in Rome, Ga. Kaitlyn earned an academic scholarship to Shorter University, but the head cheerleading coach still wanted to make her spot on the team next year official, travelling to MCHS last week to hold a signing with Kaitlyn, her family and MCHS coaches.

“It has been a dream of mine to do cheerleading in college since I was a little girl,” said Kaitlyn. “I can’t believe it’s going to happen. I’ve been training for this for years.”

“We could not be more proud of her,” said Kathleen and Kenny Sims, Kaitlyn’s parents.

Kaitlyn is one of four girls, with two older sisters, Claudia and Victoria, and one younger sister, Emmalee.

“Our Kaitlyn is the only cheerleader so far, but Emmalee tells me everyday she wants to be a cheerleader like her big sister,” said Kathleen.

Kaitlyn first discovered her love of cheerleading in 7th grade, determined to compete at the state-level. According to her mother, Kaitlyn worked throughout each year, even the summers, to improve upon her cheerleading skills.

“When she first started she couldn’t do any of the stunts except a basic cartwheel,” said Sims. “But she put the work in and every year just got better and better. We are so happy that she will get to continue doing what she loves in college.”

“Kaitlyn has been a spirit cheerleader and a member of the competition squad for four years. On the spirit squad, Kaitlyn serves as a main base in most of her stunts,” said Cheerleading Coach Denise Front. “She is always prepared and ready to do anything that the coaches need assistance with. She has strong motions and has worked really hard the last several years to add more tumbling skills.”

According to Frost, Sims has mastered a slew of impressive stunts, including a standing tuck, a cartwheel tuck, a running roundoff, and a backhand spring tuck. Sims also served as a member of the 2021 State Champion Game Day Squad. She has also competed in three state championships.

All her effort, athletically and academically, did not go unnoticed as scouts from Shorter University came knocking on Sims’ doors, offering her a new set of pom-poms and a college scholarship.

“Kaitlyn is an amazing young lady,” said Frost. “She has served on our FCA student leadership team and led huddles for our spirit squad. She will be working with FCA Cheer this summer at camps as part of the ministry team. Shorter University is very lucky to get a cheerleader of her caliber.”

“Kaitlyn is one of our veteran bases,” said Watkins. “We knew no matter who should put up that stunt it was going to hit. She showed up and worked hard every day. She pushed herself harder than we ever could. She will be greatly missed. Shorter is getting someone very special from us.”

At Shorter University, Sims plans to study Middle Grade Education while living out her cheerleading dream for the next four years.