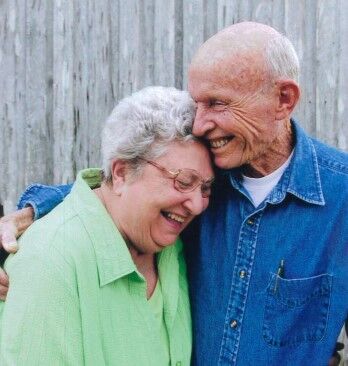 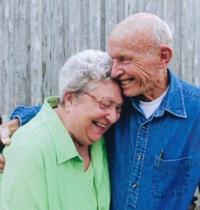 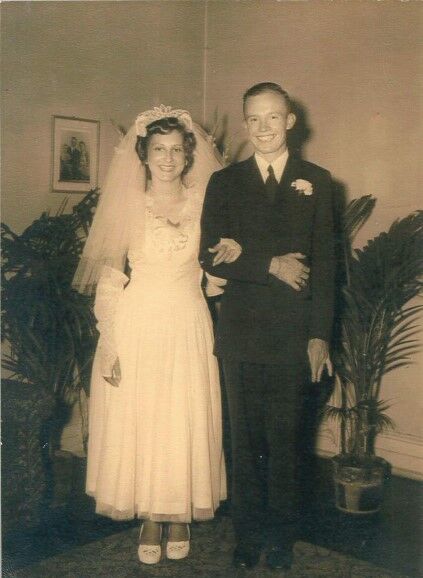 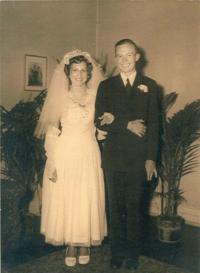 Dottie and Marvin Barrett married in 1951, shortly before Marvin was drafted into the U.S. Army. 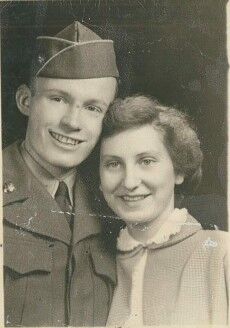 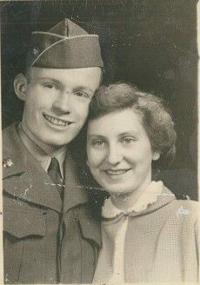 Marvin Barrett served during the Korean War shortly after marrying Dottie Malcom in 1951. The two exchanged letters while Marvin was overseas for 18 months. 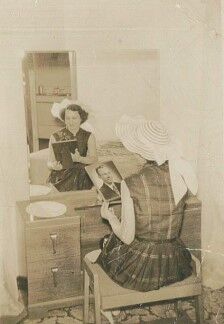 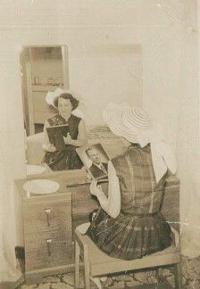 Dottie Barrett awaited the return of her new husband from the Korean War. 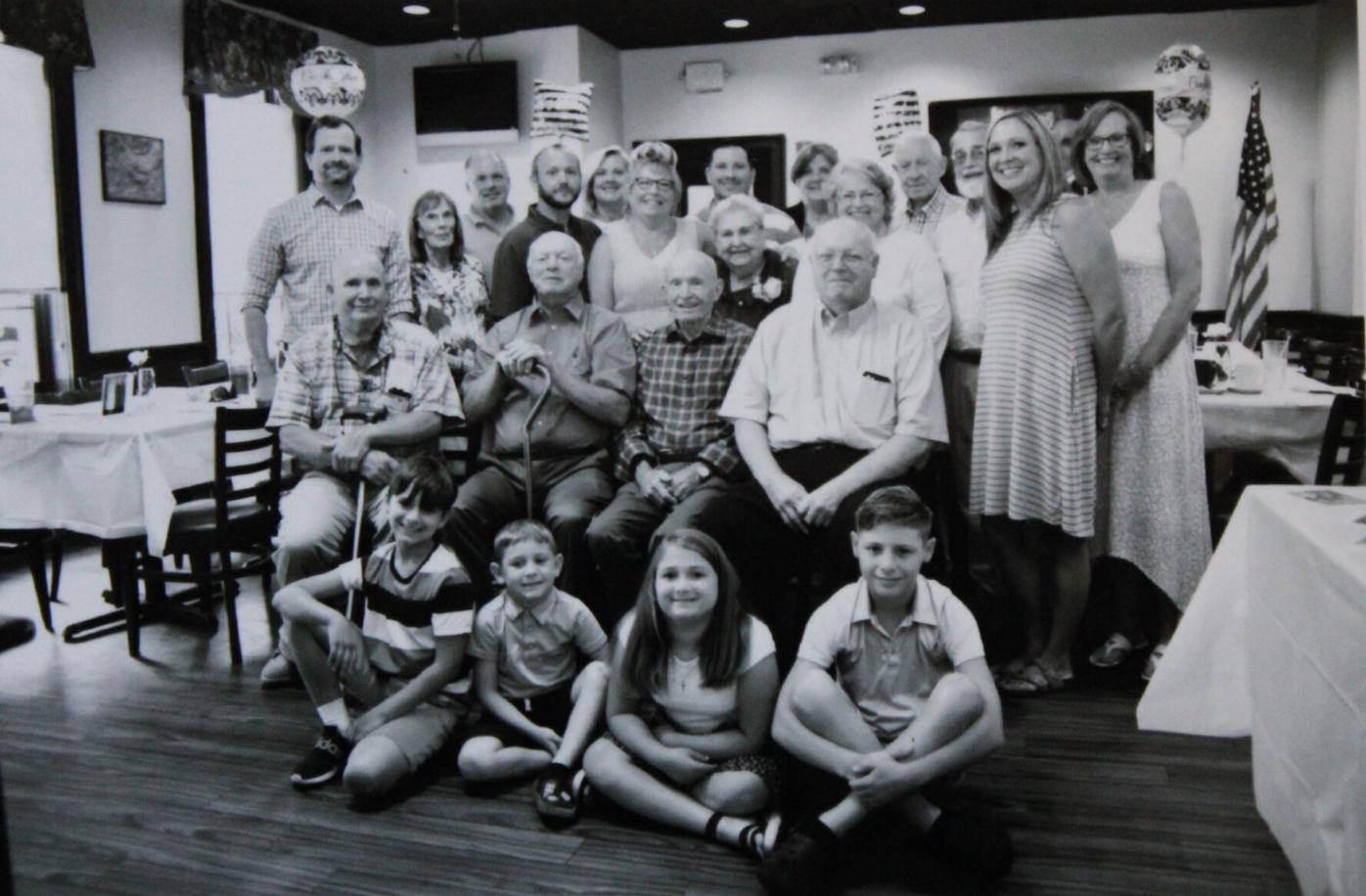 Family and friends gathered to celebrate the 70th anniversary of Marvin and Dottie Barrett at Madison Chophouse recently. 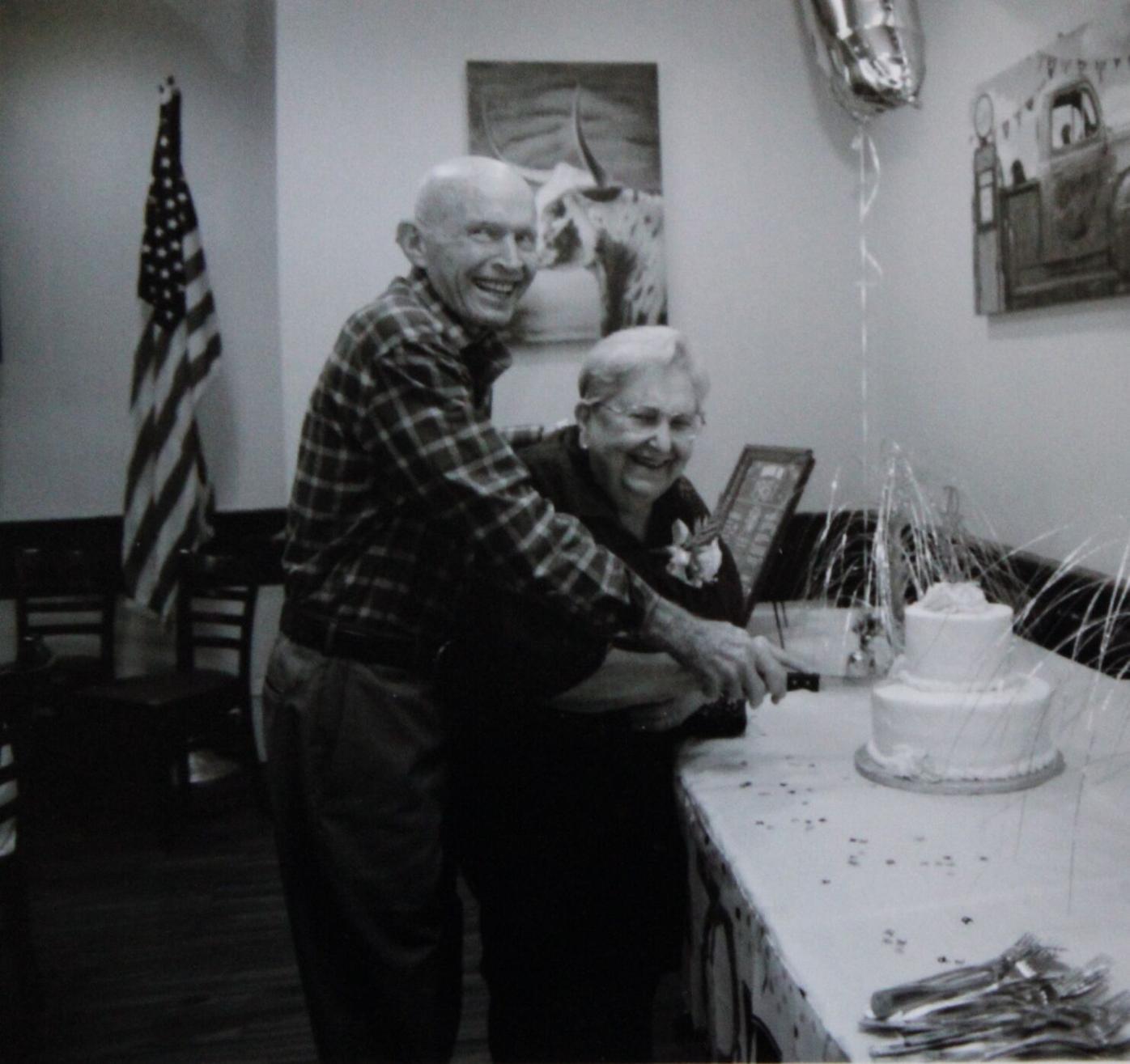 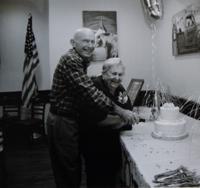 Marvin and Dottie Barrett recently marked 70 years with an anniversary celebration at the Madison Chophouse. 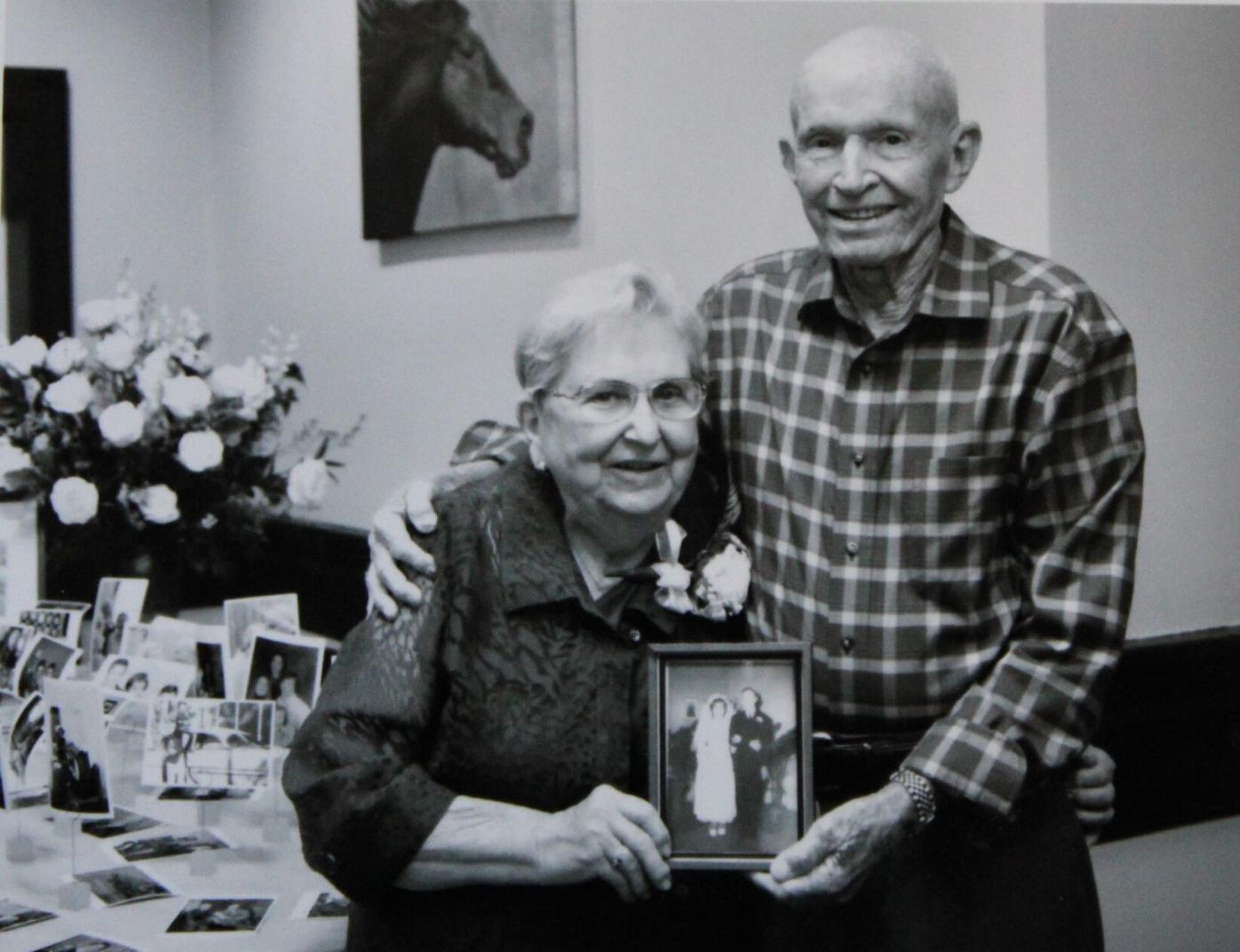 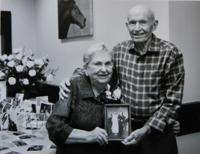 The 70-year marriage of Dottie and Marvin Barrett was celebrated recently at Madison Chophouse. 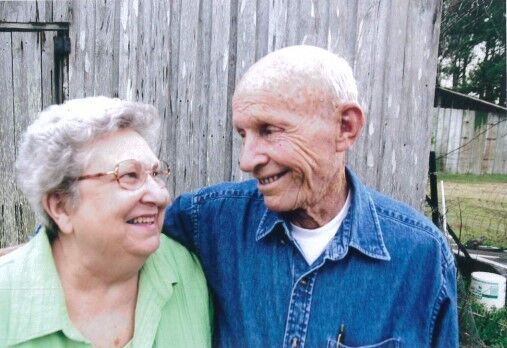 Dottie and Marvin Barrett reflect on more than 70 decades togethers.

Dottie and Marvin Barrett married in 1951, shortly before Marvin was drafted into the U.S. Army.

Marvin Barrett served during the Korean War shortly after marrying Dottie Malcom in 1951. The two exchanged letters while Marvin was overseas for 18 months.

Dottie Barrett awaited the return of her new husband from the Korean War.

Family and friends gathered to celebrate the 70th anniversary of Marvin and Dottie Barrett at Madison Chophouse recently.

Marvin and Dottie Barrett recently marked 70 years with an anniversary celebration at the Madison Chophouse.

The 70-year marriage of Dottie and Marvin Barrett was celebrated recently at Madison Chophouse.

Dottie and Marvin Barrett reflect on more than 70 decades togethers.

For Dottie, at first, it was his beautiful hair.

“He had the prettiest red, wavy hair,” she says now, 73 years from the first time she laid teenaged eyes on the man who would become her husband at a Doraville grocery store. She had gone with her sister, Lois, and brother-in-law, J.T. Brown. J.T. had gotten on at the General Motors plant. The year was 1948 and the then Dottie Malcom was visiting.

“She ran into me,” laughs a clear-eyed, Marvin Barrett. But that meeting made an impression on them both. After that, when Dottie would visit, “I would ask my sister, do you need anything from the store?”

She knew love was in bloom when she came back from shopping one day and realized that Marvin had filled her order with plain flour, not self-rising as she had asked. “He did it on purpose so I would have to go back,” she laughs.

Then Marvin’s Cushman Scooter just happened to break down in front of Lois and J.T.’s house on Peachtree Road. Dottie, of course, was inside. “I went out to help and he wanted to take me for a ride,” she says. “We got it fixed.”

When Marvin was asked what was wrong with the bike, he smiles.

Their first date was a church picnic on the grounds of Doraville First Baptist Church. “I was so nervous, I couldn’t eat,” says Dottie. Marvin upgraded his scooter to a 1936 Chevrolet he got from his father and mother, J.C. and Bessie Barrett, and began visiting Dottie at her family’s two story wood house on Greensboro Highway.

“He would come down here every chance he would get,” she says. “We would just sit at the house and visit.”

When Marvin couldn’t make the drive, Dottie would catch the Greyhound bus in front of her house and ride to Decatur where Lois would pick her up.

And sometimes, Dottie says, her love of dancing would lead her down Greensboro Highway to Richland Creek where there was a dance hall. “I loved to dance,” she laughs. Her father, a strict Baptist, didn’t appreciate his daughter’s flirtation with dancing.

“He said hugging was hugging, whether it was done by moonlight or music,” she laughs.

Three years after they met at the grocery store, while Marvin was sitting in the stands with Dottie’s mother and father, Maud and Jim Malcom, at the 1951 Morgan County High School graduation waiting for Dottie’s name to be called, Marvin gathered the courage to lean over and ask Maud if he could present her daughter with an engagement ring that night. She agreed but warned him not to ask Jim. “It’s too hot,” she told Marvin.

Dottie still has the ring and when asked to recall the moment, gives it a long, thoughtful glance. “It means the life to me,” she says.

Soon after marriage, Marvin was, like most young men at the time, drafted into the U.S. Army and sent to Germany during the Korean War. Dottie wrote to him every day, she says, and Marvin wrote when he could. Their separation was agonizing, both say. When Marvin returned home from training the first year he was in the Army and after the couple had set up house in a garage apartment in Doraville, the affect was palpable.

“He said I had lost so much weight grieving for him that when he reached for me he couldn’t find me, I was so thin,” she laughs. Dottie was working in the payroll office of Southern Bell and Marvin, pre-Army, worked in train car records at the Southern Railroad.

At the end of every letter she wrote she signed off, “I love you forever, and two days.”

For 18 months Marvin spent his days on the front line of the Cold War. “It looked like every day we were going to fight the Russians. It was not fun.”

But every day, “in the field mainly,” he was able to pull a letter from Dottie out of his uniform pocket and read an expression of undying love.

And he wrote back, too.

I believe that God above picked you for me to love. He picked you from all the rest because He knew I love you best.

I had a heart and it was true, but now it’s yours from me to you.

Take care of it as I have done.

I’ll give the angels back their wings, golden harps and everything. And to show you what I’d do, I’d go to H___ to be with you.

Before Marvin and three other soldiers paid a cab driver in Ft. Jackson, S.C. $75 to drive them to Georgia, the Army offered Marvin, a corporal, a promotion to sergeant if he would stay.

Marvin, with his young bride in mind, had a succinct response. “You ain’t got enough stars or bars to keep me in here one more day.”

In 1968 the couple, with three children, moved to their current home on Sugar Creek Church Road, near Dottie’s home place. When the Barrett family moved into the farmhouse, there were at least four fireplaces and cold water in the kitchen sink. Part of the contract of buying the property included an agreement to pay $50 for the kitchen sink. The owner, says Dottie, “was a peculiar man.”

There was no plumbing, no heat, no air. It was June.

The first thing Marvin, who had begun a career in construction, did was build a working bathroom in the house. “They did not like going to the outhouse,” says Dottie of her three children at the time. That winter a bird flew into the house. Dottie found the creature on the floor one morning. “It had frozen to death.”

They remained in the house and are surrounded, now, in comfort and countless pictures of children, their four grandchildren and six great grandchildren. “We love this house,” says Dottie.

Sons Steve and Jason and daughter Donna are neighbors. Daughter Judy lives near her son, an active duty U.S. Army soldier, near Ft. Benning. “We love it,” Dottie says. “Donna cooks for us sometimes and Jason mows our grass and does whatever Marvin can’t do. We have a happy home.”

And a happy marriage that has endured nearly three quarters of a century. In June, the family gathered at the Madison Chophouse to celebrate the couple’s infinite love.

Marvin closes his eyes and contemplates. “I can’t believe it’s been 70 years,” he sighs.

Dottie worries about her husband, a cancer survivor who she watches when he walks outside.

When they got married, a gallon of gas was 20 cents and a loaf of bread was 16 cents and like all couples, the Barretts endured blinding moments of happiness and endured the in-between. Dottie smiles. “There are some days I could have took him down to the gully and threw him in,” she says.

“But I would have gone and got him before it got dark.”

Marvin says the couple’s Christian faith sustained them through hard times. Love helps, too, he says. “You’ve got to love the person you live with,” he says. Dottie says she and Marvin have always been considerate of each other, have lived a life of purpose and serenity.

There is no red hair left on Marvin’s head. He can’t ride a scooter any more and recently he tripped on a garden hose while trying to work in the garden. But his sense of humor is strong. He remembers back to the letters, to his teenage bride telling him she would “love him forever and two days.”

But then there is his Dottie, there are his children, there is the home place the couple spent a lifetime improving and making comfortable. There is the time and place of a couple with an endless love.

“I could not envision a life without her,” he says.