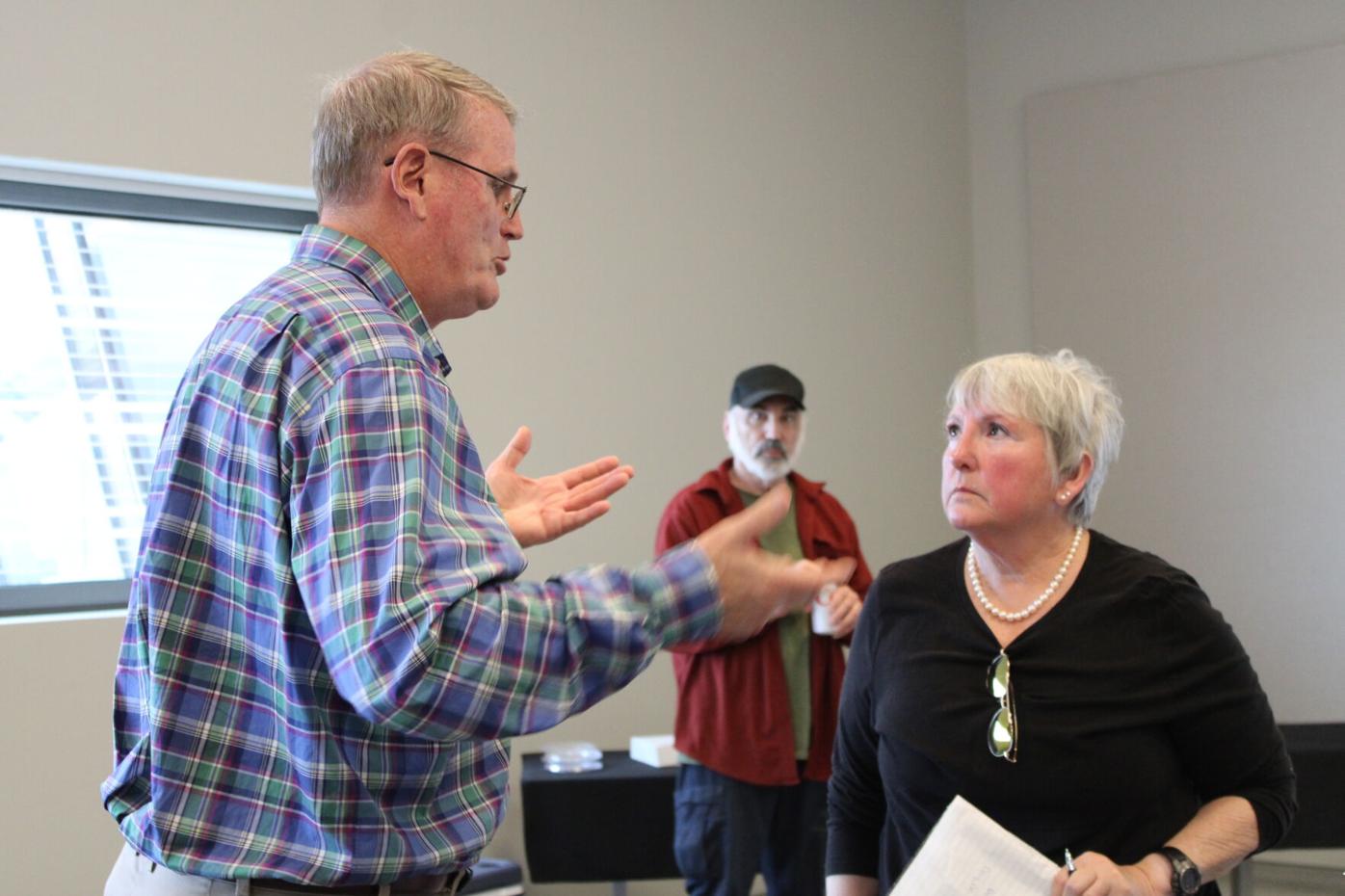 JDA Member Andy Ainslie, who also sits on the Morgan Count Board of Commissioners, speaks with Rutledge Resident Jeanne Sutyak over her concerns about the Rivian plant to be built near her home. 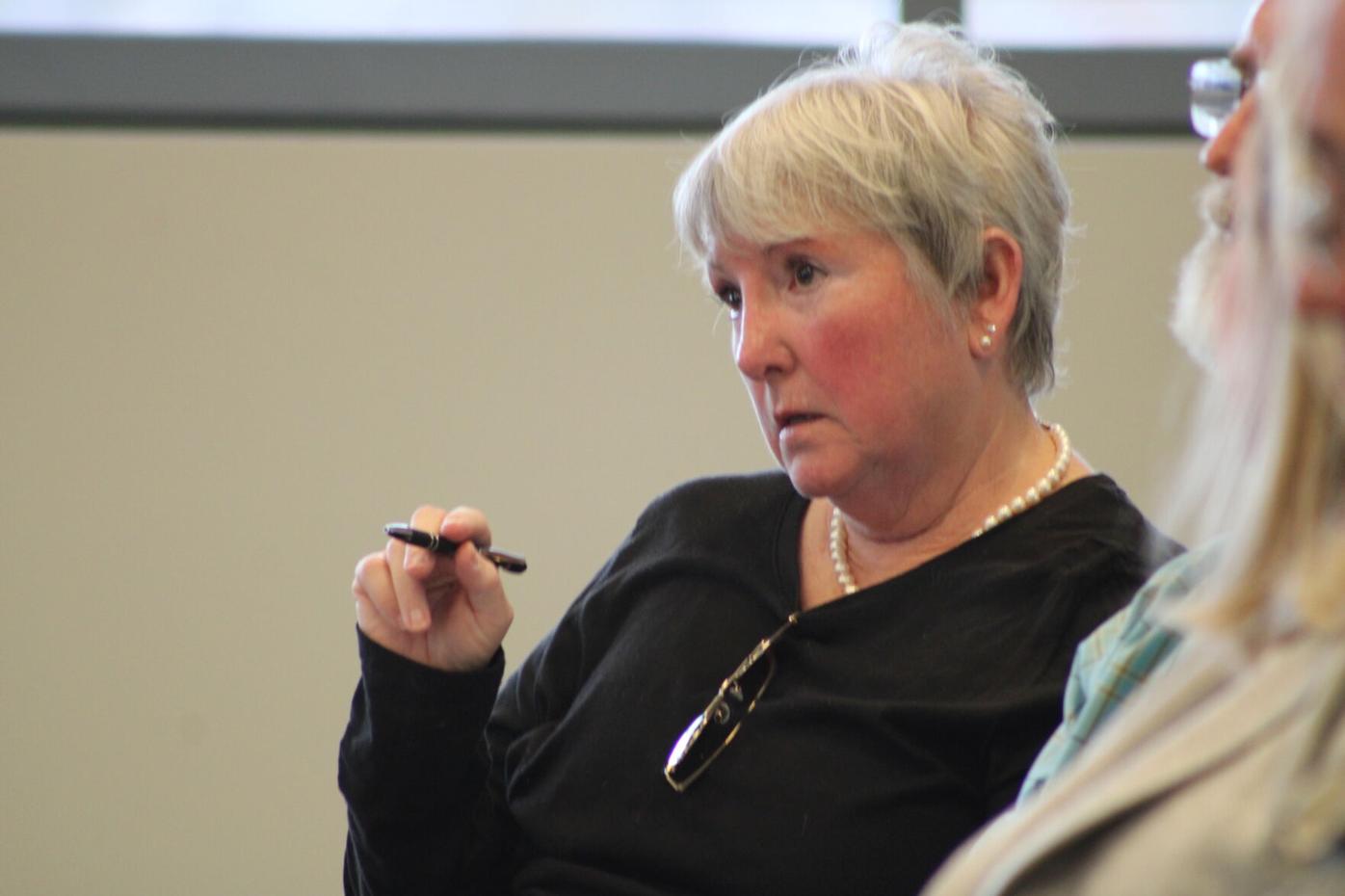 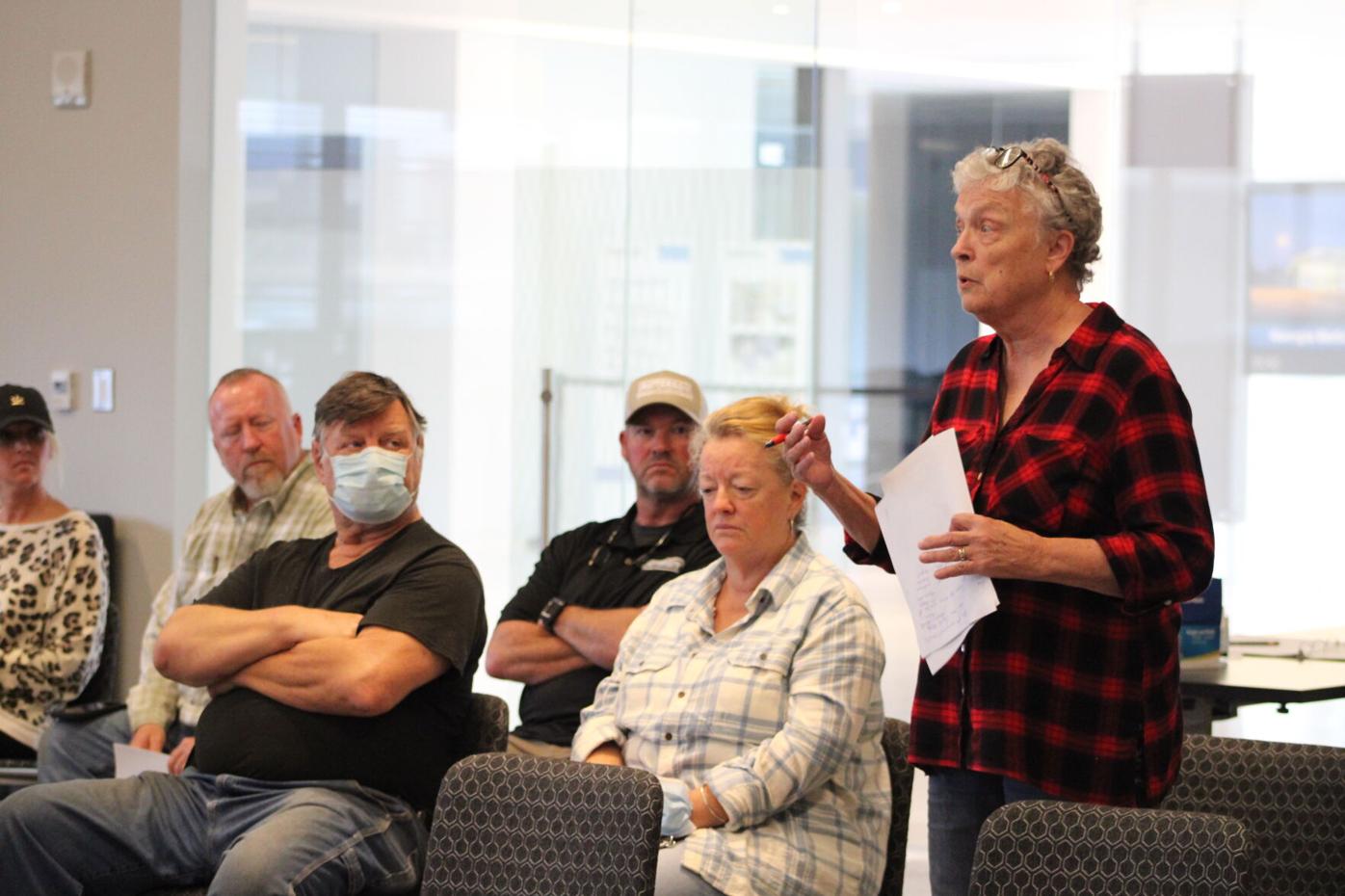 Joellen Artz of Rutledge spoke to the JDA on Tuesday, Dec. 28, decrying the loss of farmland in Morgan County due to the incoming Rivian project. 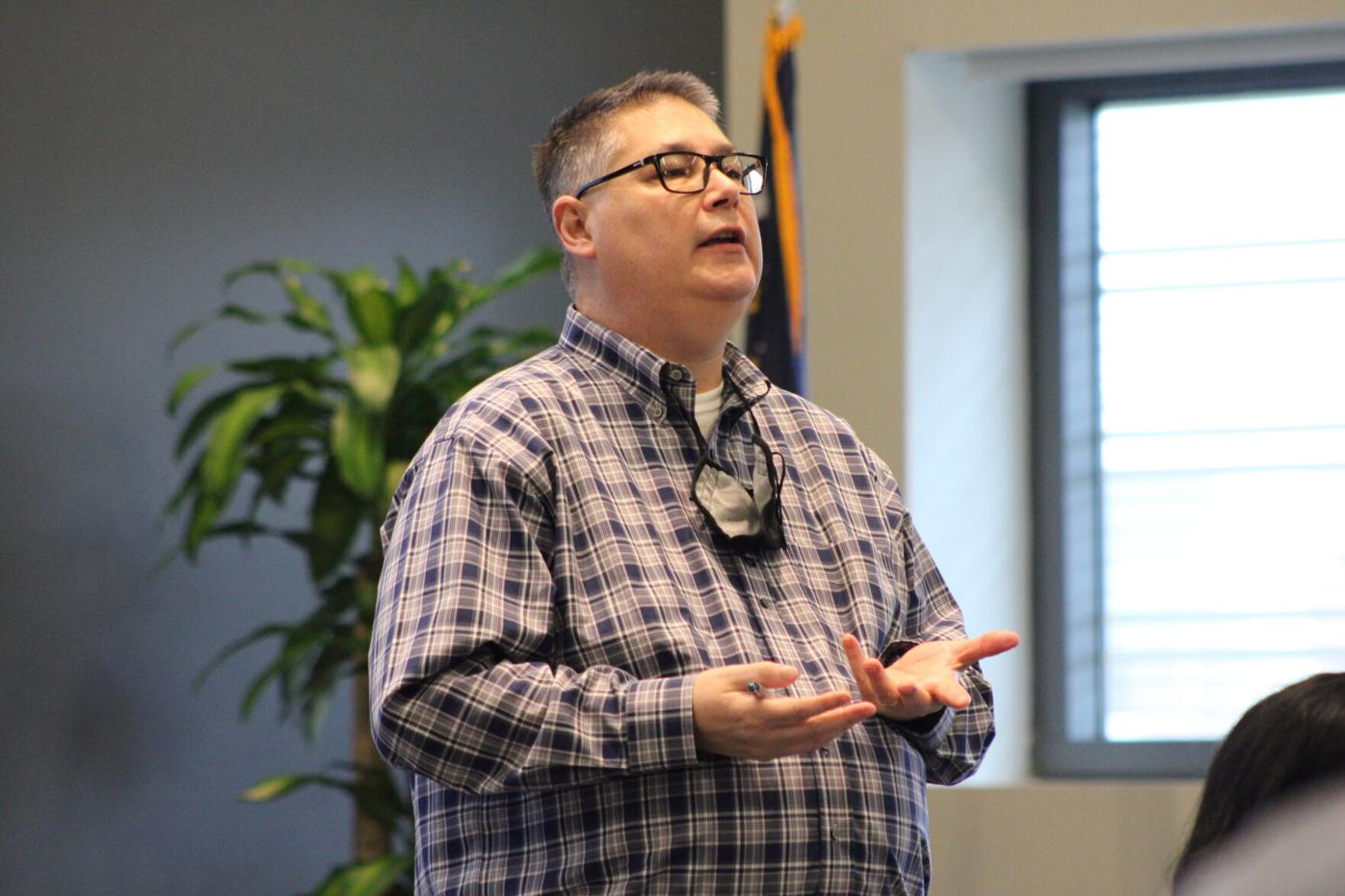 Shane Short, executive director of economic development for Walton County, addresses the public’s concerns over the forthcoming Rivian Plant to be built in both Morgan and Walton counties across nearly 2,000 acres of land. 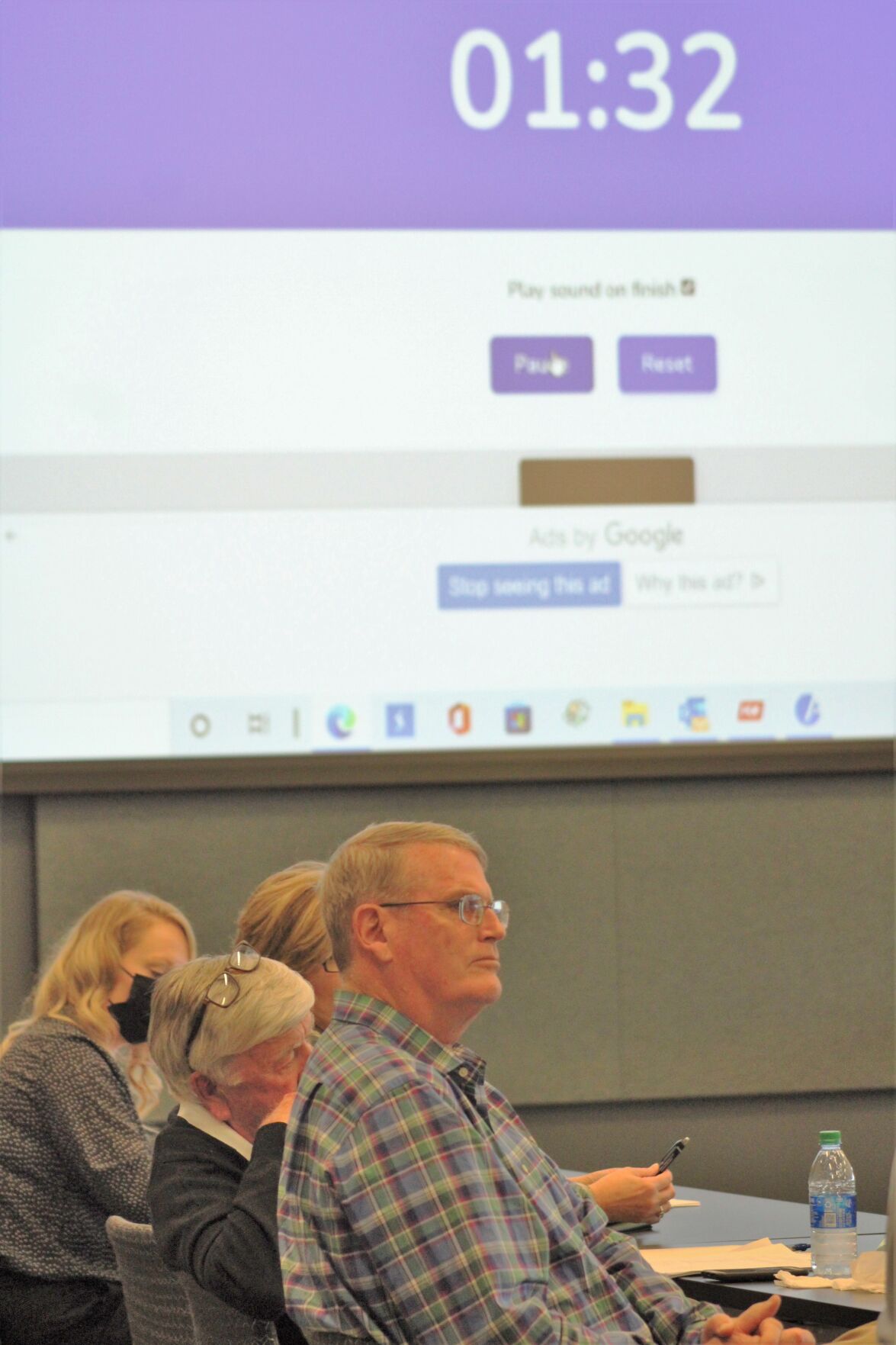 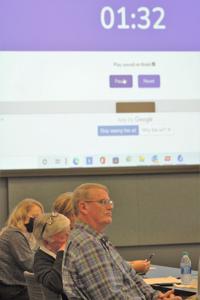 JDA Member Andy Ainslie, who also sits on the Morgan County Board of Commissioners, listens to complaints from local citizens about the coming Rivian Automotive Plant. Each member of the public was given two minutes to speak. 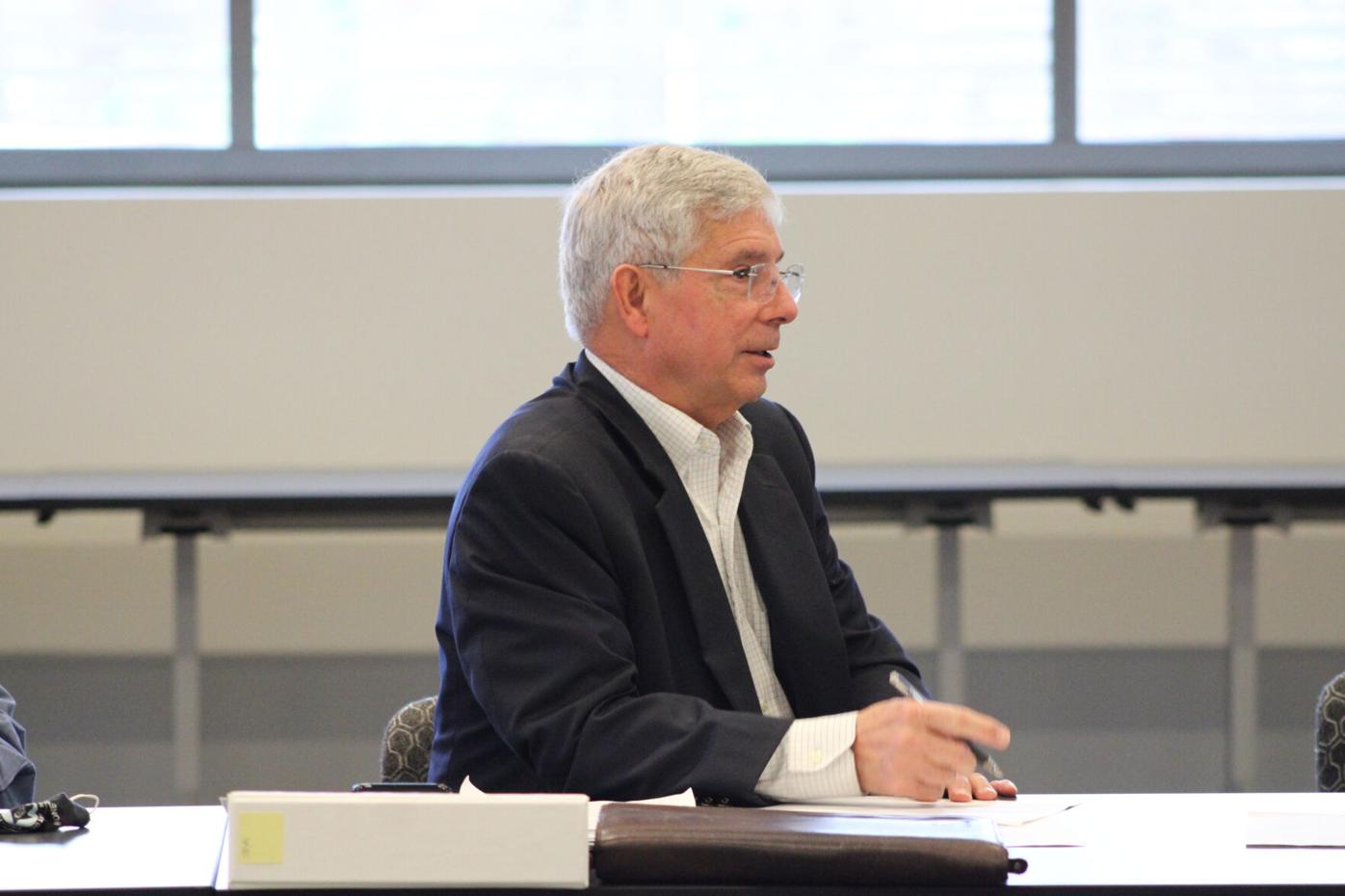 JDA Member Andy Ainslie, who also sits on the Morgan Count Board of Commissioners, speaks with Rutledge Resident Jeanne Sutyak over her concerns about the Rivian plant to be built near her home.

Joellen Artz of Rutledge spoke to the JDA on Tuesday, Dec. 28, decrying the loss of farmland in Morgan County due to the incoming Rivian project.

Shane Short, executive director of economic development for Walton County, addresses the public’s concerns over the forthcoming Rivian Plant to be built in both Morgan and Walton counties across nearly 2,000 acres of land.

JDA Member Andy Ainslie, who also sits on the Morgan County Board of Commissioners, listens to complaints from local citizens about the coming Rivian Automotive Plant. Each member of the public was given two minutes to speak.

Rutledge residents’ hopes were dashed last week when about a dozen of them trekked to the Joint Development Authority (JDA) meeting in Stanton Springs Business Park to voice opposition to the historic, massive multibillion Rivian Automotive plant planned for construction in Morgan and Walton counties.

One economic developer put it bluntly to the group.

“That ship has sailed for all intents and purposes. The company is coming. You can’t stop it,” said Shane Short, executive director of the Development Authority of Walton County, to a group of upset citizens hoping to deter Rivian’s imminent arrival.

Short informed the group that both the JDA and Rivian leaders will host Town Hall meetings in Rutledge, and Social Circle, to listen to the concerns of local citizens.

Short said the final details of the multibillion dollar megadeal are finalized, the site plan will be released to the public and town hall meetings will be scheduled in coming weeks.

Once the JDA finalizes dates and locations, the Town Hall meetings will be advertised on the JDA’s website and shared with local leaders to get the word out to the community.

One Rutledge resident joked that the upcoming meetings could become rather heated with the throngs of protesting opponents planning to attend.

“I’ll be selling ropes and torches,” joked Sim Sergiadis of Rutledge to the JDA amidst uncomfortable laughter.

Rivian is poised to invest $5 billion into the new plant across 2,000 acres straddling Walton and Morgan counties, generate 7,500 jobs, and churn out 400,000 electric vehicles per year once fully operational. However, last Tuesday’s meeting provided a glimpse of the complaints to come from local residents unhappy with Rivian’s arrival in Rutledge.

Some were concerned that a large industrial development of such unprecedented magnitude will irreparably damage Morgan County’s rural character and result in the loss of hundreds of acres of farmland, as the project will be partially constructed atop the old Verner Family farmlands in Rutledge.

Others worried that the influx of thousands of jobs would lead to overcrowded schools, unwanted housing and apartment developments, and increased traffic and noise.

Others still took aim at the JDA for a “lack of transparency,” claiming the four-county board tasked with overseeing Stanton Springs purposely waited until “there was no turning back” before alerting the public of the controversial, community-altering Rivian development to avoid public backlash.

“We are going to lose hundreds and hundreds of acres of farmland in Morgan County. I know Andy Ainslie knows the value of preserving our farmland,” said Artz, who claimed the JDA and Morgan County leaders have been criticized for secrecy since the 1990s. “This blindsided everyone.”

John Strickland of Rutledge questioned the JDA’s decision to sign a non-disclosure agreement with Rivian, resulting in keeping the local community in the dark about the pending development.

Jeanne Sutyak of Rutledge worried about her house being so close to the promised Rivian site.

“This was supposed to be my forever home,” said an emotional Sutyak. “Am I going to be eminent domained out of my home?”

“It’s a big impact, and we understand that,” said Short. “We did not recruit Rivian. Rivian came to the state of Georgia, and the state of Georgia came to this JDA…At the end of the day, the company selected Georgia. This is where they felt like they wanted to be. And we look forward to that town hall meeting where we can tell you more about the company and their footprint.”

Short assured the crowd that Rivian has pledged to preserve as much of the greenspace on the 2,000-acre site as possible, noting that the company is literally counting every single tree on the site as part of their environmental impact survey.

Short also noted that while new housing developments will surely arise in all four surrounding counties, that unmitigated growth would not happen in any community, as each county has total control over their own zoning standards and proposed residential projects.

Short also said engineering plans have been designed to help reduce traffic and expand infrastructure capabilities. Short adamantly emphasized that no properties have been subject to eminent domain during the Rivian negotiations, but claimed that all property owners affected willingly sold their land to the JDA.

Short also addressed criticisms about the JDA entering into an NDA that prevented them from releasing information about Rivian to the public sooner. Short said NDAs are standard procedure on any big economic development project required by prospective companies, not the JDA.

“They do this to prevent competitors from knowing what they are up to…they control the timing of these projects very carefully,” said Short. “There is no intent from anyone in the JDA to keep this secret to benefit us. We love to tell good news. We are just legally bound in what we can and cannot say. It’s not that we want to hide information.”

However, Short promised the NDA would soon be lifted, and the JDA will be able to discuss in detail Rivian’s site plan, the tax incentives and recruitment tactics used by the State of Georgia to secure the Rivian megadeal, and JDA members will answer all concerned citizens’ questions at the coming town hall meetings.

As of press time on Tuesday, Jan. 4, the JDA had not announced the time or location of the upcoming town hall meetings. Visit the JDA website for updates at www.stantonsprings.com. Follow the Morgan County Citizen on Facebook for the latest updates as this story unfolds and public meetings are announced.