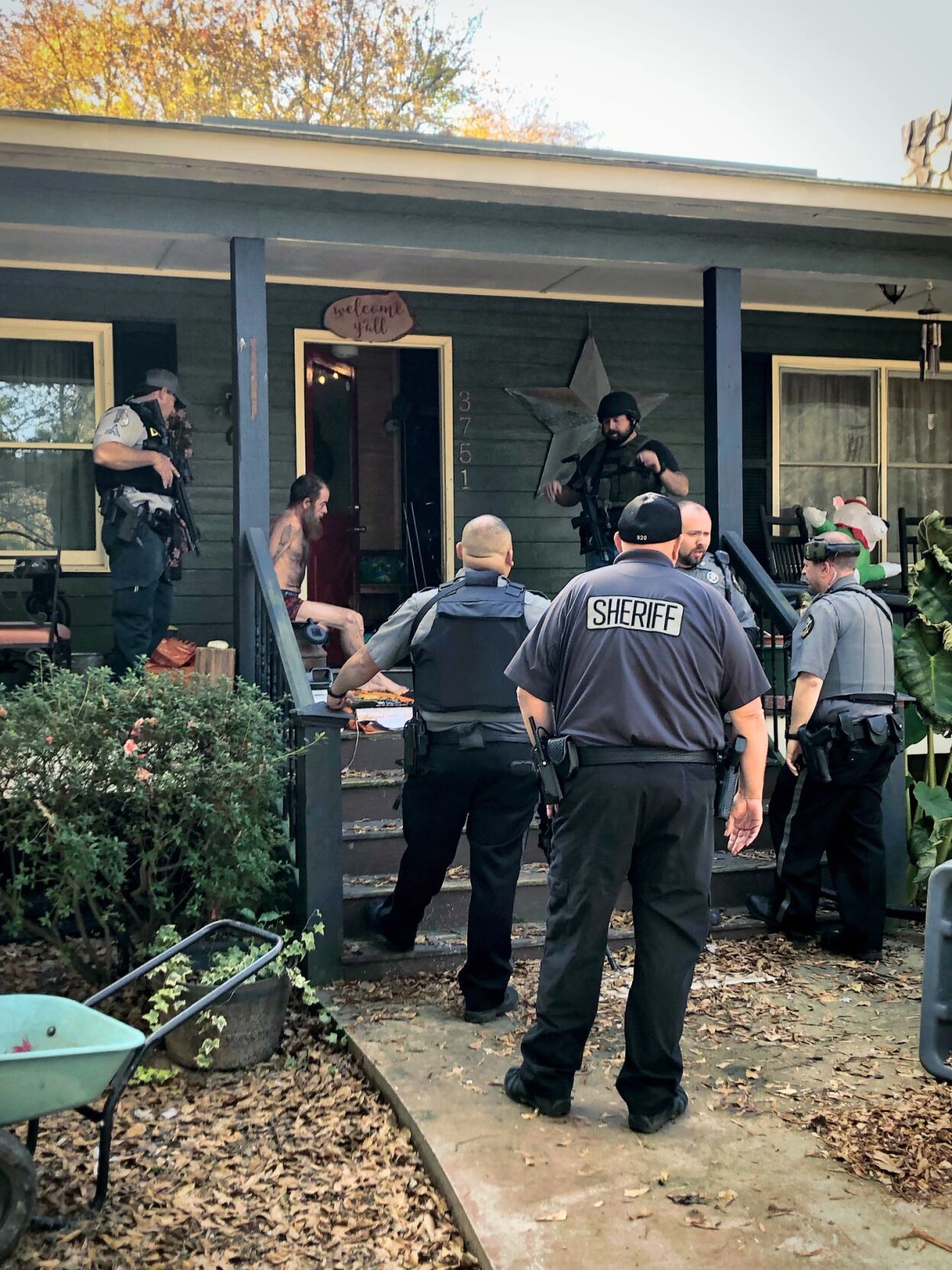 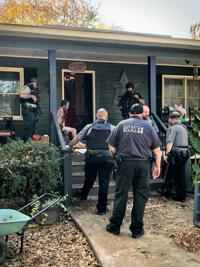 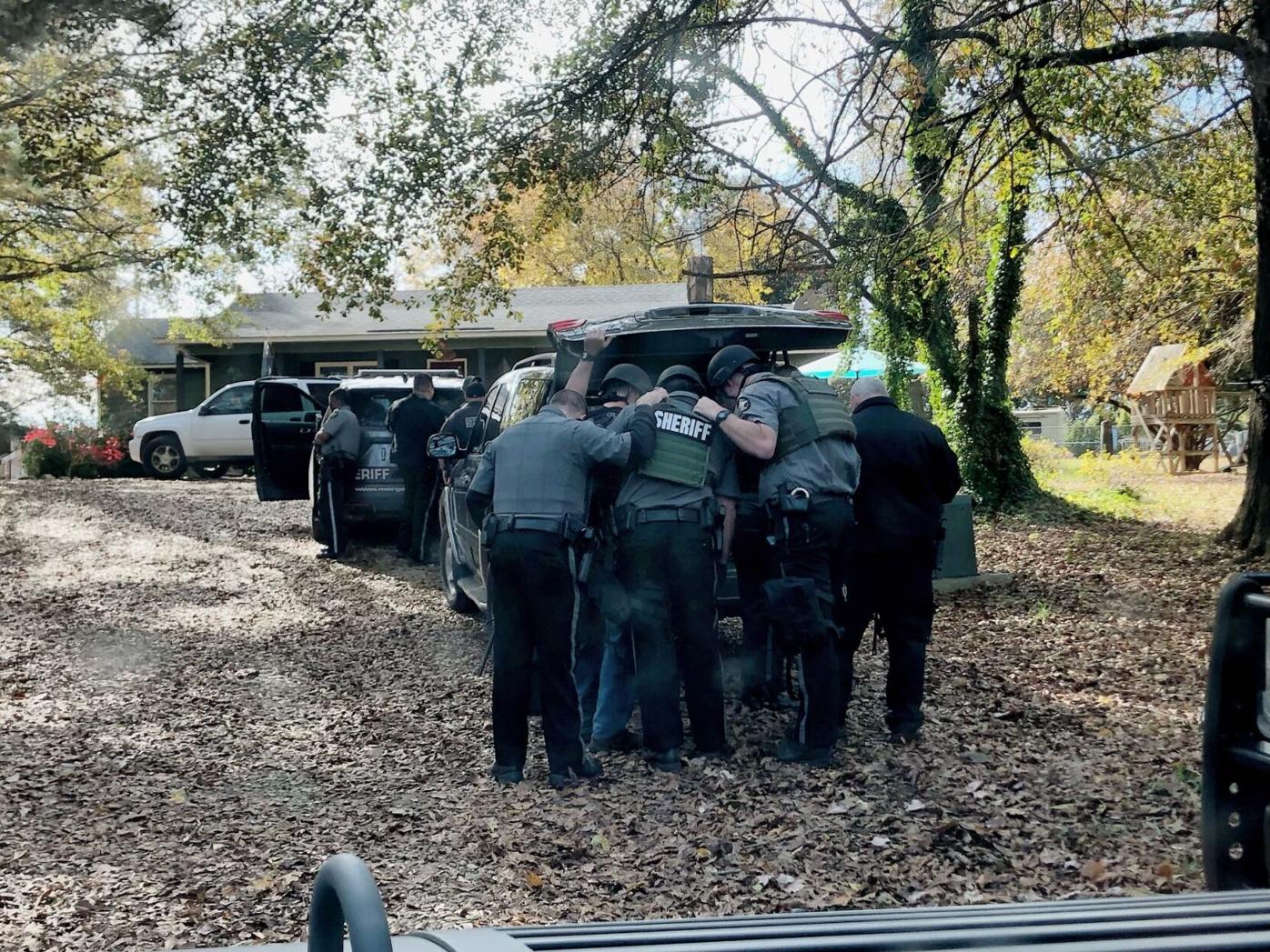 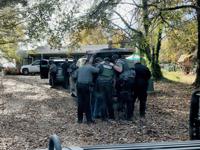 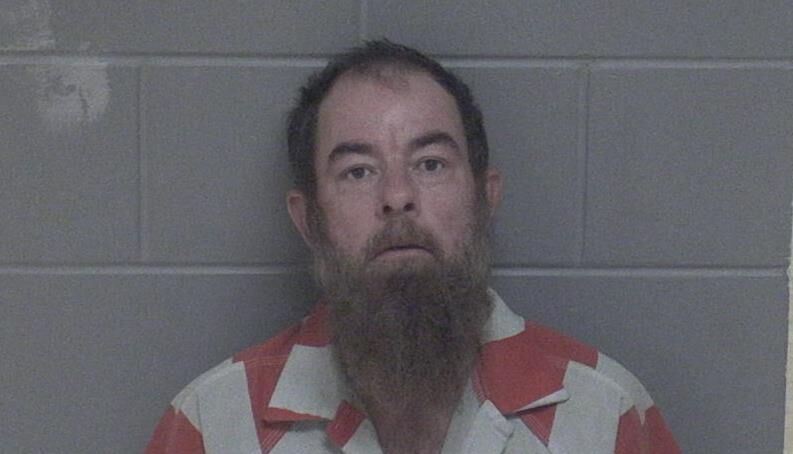 For the second time this year, it took law enforcement officers with ballistic shields, tear gas and a taser to remove a man from his Greensboro Road residence.

According to Morgan County Sheriff’s Reports, Robert Winston Palmer, 44, Madison was finally handcuffed and detained after multiple agencies had surrounded the house at approximately 11:30 a.m. on Tuesday, Nov. 23. Law enforcement had lobbed four canisters of tear gas through a window officers had previously shattered when efforts to convince Palmer to come out of the house peacefully failed.

Two Morgan County Sheriff Office deputies, Justin Davis and Eddie Manders, initially responded to a domestic complaint at the residence and, en route, were told that Palmer allegedly had a deer rifle with scope in his possession.

While the deputies made contact with a woman who had fled the residence, reports state, they both heard a single gunshot come from the residence. Both deputies retreated to the rear of a patrol vehicle and kept the residence under armed surveillance while calling for assistance.

Capt. Brandon Sellers, who in July had been one of six officers that stormed the same residence with ballistic shields to arrest Palmer after shots fired and alleged threats, along with Deputy Bo Kelly, Deputy Cameron Ptak and Sgt. Chase Young approached the house using an armored Humvee for cover and shattered a window. A Morgan County deputy was continuously trying to get Palmer to leave the residence by communicating with a patrol vehicle’s public address system.

“We just did not want to go head to head not knowing what his mental state might be,” said Capt. Brandon Sellers, who organized the response. “We needed to get him out to even the playing field a bit.”

Reports state that Palmer crawled out onto the front porch of the residence, stood up and screamed for the officers to “(expletive) shoot me.”

Palmer then retreated back inside the residence. Five minutes later he walked back to the porch, again allegedly screaming at officers. This time Deputy Ptak fired his taser weapon at Palmer. The weapon disabled Palmer and he was arrested at approximately 1:30 p.m.

“It couldn’t have worked out any better than it did.” Sellers said. “Nobody was hurt, the bad guy was not injured and no law enforcement were injured.”

When deputies Davis and Manders arrived they had located a woman who had called 911 to seek help. She allegedly told the deputies that Palmer had “been out of control and mad at the world for about a week.” The woman said she called 911 because Palmer had allegedly spit in her face, blew his nose on her and grabbed her by the hair and pulled her around the residence.

Following the standoff, Sgt. Chad Lanier obtained a search warrant for the residence on the 3700 block of Greensboro Road and allegedly found a loaded .243 rifle and a loaded .22 revolver. The rifle, reports state, had a spent shell inside the chamber.

On July 20, law enforcement officers were called to the same residence after Palmer had allegedly threatened workers at a Pilgrim’s Pride facility of three chicken houses behind his residence before firing approximately 10 shots inside the residence.

He also allegedly punched the driver of a truck in the eye when the driver exited his truck to stop Palmer from screaming obscenities at another driver. In that incident, concerned neighbors heard the shots and screaming and called 911. Again, deputies attempted to coerce Palmer to exit the residence using a public address system without success.

Again, officers armed with ballistic shields gained entry to the residence and detained and arrested Palmer. Reports at the time stated that there was 10 bullet holes in the drywall of the residence. A Heckler and Koch model 91 rifle, a 30.06 Remington rifle and a Marlin 917 bolt action rifle was confiscated following the July arrest along with ammunition magazines. Reports also stated that following the July arrest deputies said Palmer “smelled of alcohol and vomit” and that he allegedly told deputies he shot the holes in the walls because he “was mad at himself.”