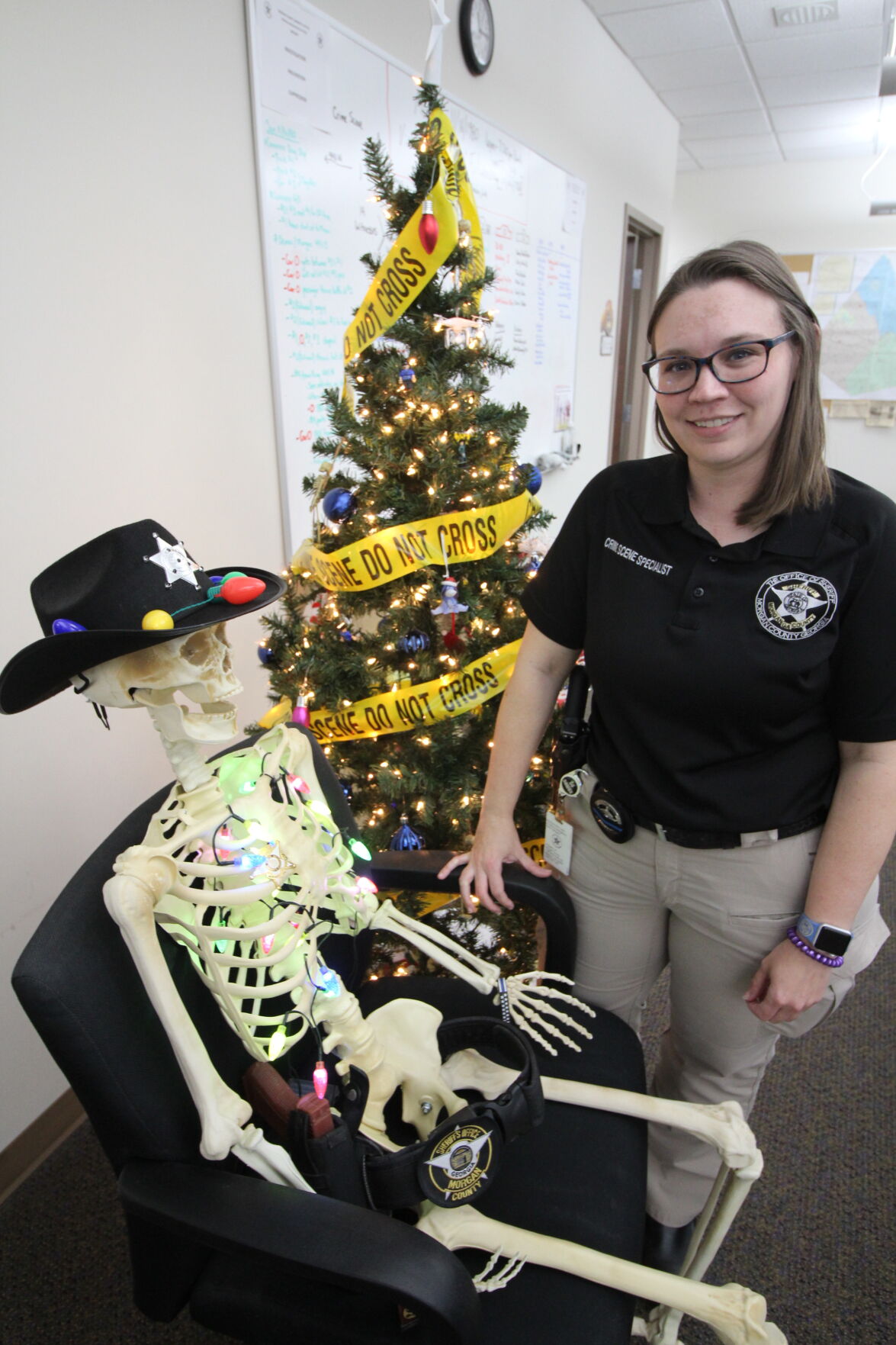 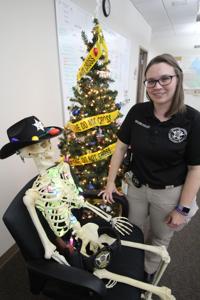 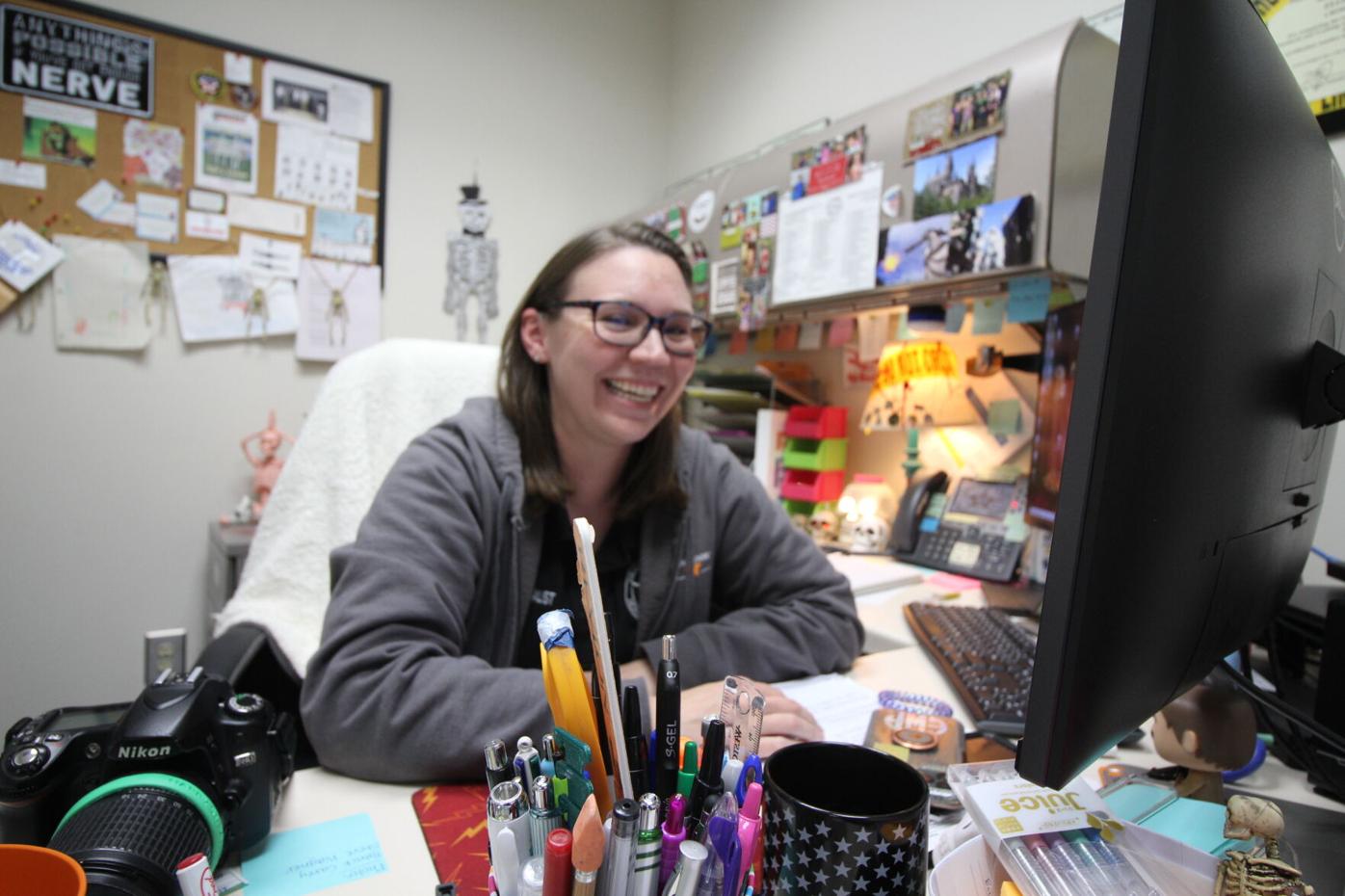 In Ellen Welch’s office, tucked behind three electronically locked doors in the bowels of the Morgan County Public Safety Center, are skulls.

And more skulls, including an actual human skull kindly given to the Morgan County Sheriff’s Office Crime Scene Investigator by a retiring Georgia Bureau of Investigation (GBI) agent.

Outside her office is “Herschel,” a whole synthetic skeleton decorated for the holiday season with bright lights and a Santa Hat. Herschel sits, smiling, next to a Christmas tree adorned with crime scene tape.

The 34-year-old Welch, who has worked for the Morgan County Sheriff’s Office for 10 years since she earned a biology degree from the University of Georgia, said the puzzle of trying to drag information from a crime scene, from blood splatter to hard-to-get fingerprints to clues left by broken bones are fascinating.

“I’m one of those who are fascinated by weird things,” she says with a warm smile that stands in contrast with the organized clutter (including a placard that asks: “Why y’all trying to test the Jesus in me?”)

Except now she is better. Way better.

Welch recently completed a 10-week intensive training class with the National Forensic Academy. With the successful completion of the class, where she spent time with 29 other like-minded forensic scientists including Morgan County native and GBI Special Agent Amelia Collier, Welch is now one of fewer than 2,500 law enforcement officers nationwide to have learned and earned certification in several different disciplines, from bloodstain pattern analysis, to shooting incident reconstruction.

In all, the course offered more than 10 specific areas of scientific study, including the infamous “Body Farm” at its Oak Ridge, Tenn., campus. The farm, which Welch says is larger than a football field and packed with bodies in different stages of decomposition, gave her and her five-member team a chance to discover, dig up and determine science from a decomposed, or decomposing body. The team used trowels to scrape away the earth to get to the body and the insight that it brings.

“It’s just full of graves of different ages,” she says. “it didn’t smell too good but you get used to it.”

Her cadaver, she says, had an artificial knee and other clues to his death, or how his life was lived. “You could tell he had some kind of trauma,” Welch says. The bodies are all donated to the association and, if requested by the family, are returned after decomposition and study.

The “post mortem” allowed Welch and other students to see the effects of weather, temperature, time and insects on a human body. Some bodies were buried deeper than others. Some were not buried at all.

“You learned based on what kind of bugs and the development of the life cycle of the bug and the state of decomposition.”

Displayed prominently in her office is a shadow box of insects, a project she completed in college. “I caught them, killed them, pinned them and identified them,” she laughs. Also on the walls around her office are countless certificates of completion of various crime scene classes and disciplines. Stacked vertically in a shelf are more certificates that doesn’t have wall space.

But, she says and so do her co-workers, the National Forensic Academy (NFA) certificate, a $16,000 investment made by the Morgan County Sheriff’s Office using funds seized from criminal activity, opens up a new world in local crime scene investigation.

The NFA graduate certificate will find a space on the wall. “That pulls a lot of weight,” she says.

So does Chief Deputy Keith Howard. Howard, a career GBI special agent and Morgan County native before coming to work at the Morgan County Sheriff’s Office, says Welch’s successful completion of the course will make her not only a local but a regional asset.

“It’s interesting that an agency this size has somebody with that level of training,” he says.

Welch is now a state-wide recognized crime scene specialist and crime scene technician. “She adds a forensic element that our investigators need to help solve cases, particularly when the offender is unknown.”

Welch says during the training she learned various methods of extracting fingerprints from difficult surfaces using a variety of chemicals and methods. She says, in fact, one of the joys of the job is the ability to lift a fingerprint at a crime scene that leads to the identification to a suspect.

Despite the years, she says she remains fascinated by the process and the continual challenge of both learning and application.

“I’m still interested. No one scene is like the next. You have to put all your knowledge to it.”