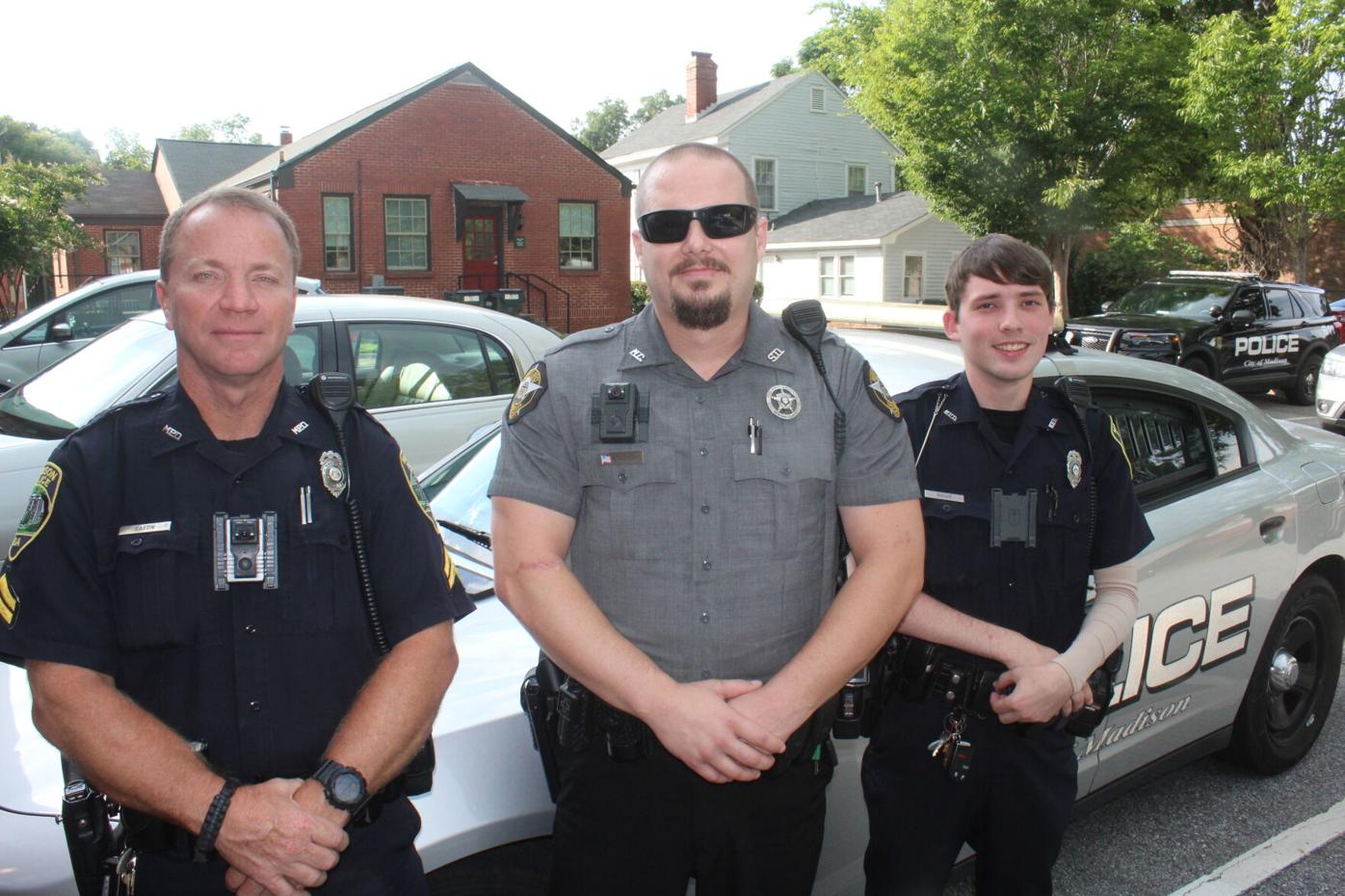 From left, Corporal Stacey Eaton of Madison Police Department, Deputy Lee Kitchens of the Morgan County Sheriff’s Office and Officer Blake Rowe of the MPD, all worked together to bring a man back from a suspected overdose. 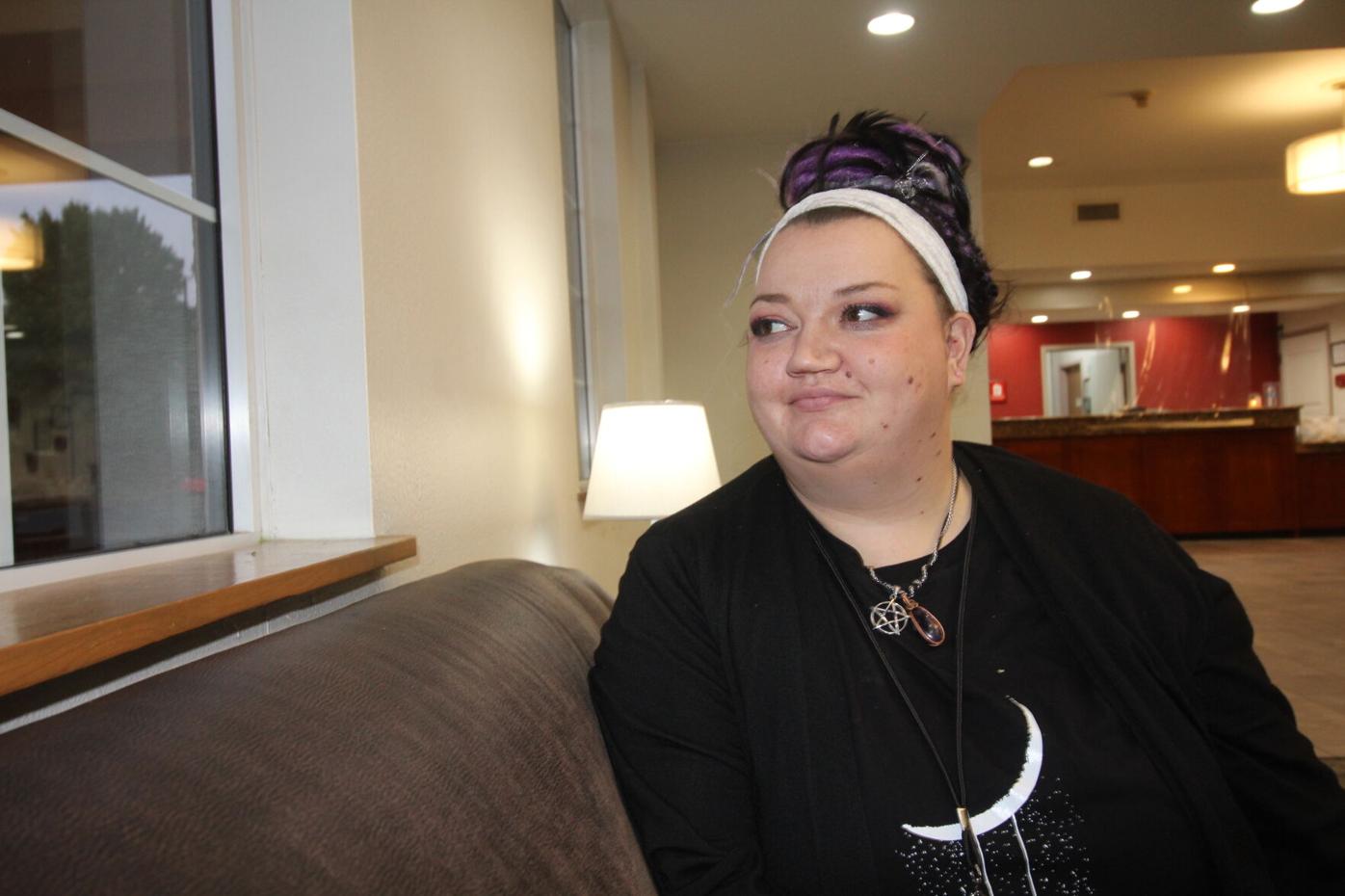 Savannah Morreira, a night clerk at the Red Roof Inn on Eatonton Road heard shouting from the back parking lot and went outside to investigate. She found a man unresponsive from a suspected overdose and began CPR efforts. 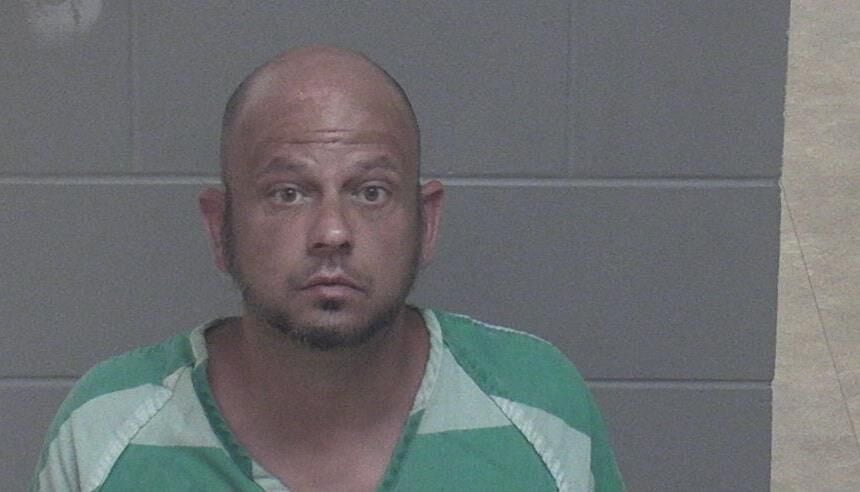 From left, Corporal Stacey Eaton of Madison Police Department, Deputy Lee Kitchens of the Morgan County Sheriff’s Office and Officer Blake Rowe of the MPD, all worked together to bring a man back from a suspected overdose.

Savannah Morreira, a night clerk at the Red Roof Inn on Eatonton Road heard shouting from the back parking lot and went outside to investigate. She found a man unresponsive from a suspected overdose and began CPR efforts.

Corporal Stacey Eaton was gassing up his Madison Police Department patrol car around 4:30 a.m. on Thursday, July 1. It was the nearing the end of Eaton’s shift. His partner, officer Blake Rowe, was finishing a two egg breakfast at the Waffle House (it’s $4 and peace officers get free coffee) near Interstate 20.

That night the two, Rowe working Zone 1 (the interstate area) and Eaton working Zone 2 (downtown and business district), had arrested two men for allegedly stealing a truck, had wrestled a man so impaired that after they drug him from an interstate motel room and transported him to the Morgan County Detention Center, jail officers stripped the man down and placed him on suicide watch in a padded cell.

Rowe had confronted a crowd of about 50 people that was reaching a boiling point at Orchard Grove Apartments and cared for a kid with a split lip.

Nobody wanted to press charges there.

Both Rowe, who was sitting with Morgan County Sheriff’s Office Deputy Lee Kitchens at the Waffle House, and Eaton heard another call come across their emergency radio. Eaton jammed his gas cap back on, Rowe tossed his credit card to a Waffle House waitress and jogged out of the restaurant. “You get a call for an unresponsive person behind the Red Roof and it’s an OD,” says Eaton.

They had almost made it through another shift, both say. They were near the end and squarely in that one hour that seems to attract a human barometric response to both rage and acts of hopelessness.

Savannah Morreira was nearing the end of her shift, too. Morreira, a Union Point resident, has been the night clerk at the Red Roof Inn for more than a year. The single mother of three children (her 5-year-old starts kindergarten this year and she’s excited about that) works from 11 p.m. to 7 a.m. and “really likes my job.”

Third shift, she says, is typically “quiet and relaxing.” It also affords her time to get home to get her children to school, sleep and come back for another shift. “I love working at night,’ she says. “I like the hours. I like the people. There have been several occasions when I’ve had the opportunity to help people. I like that.”

Morreira had walked the parking lot earlier and had seen a man sitting with his head tilted back in a car seat. She assumed he was sleeping and was getting ready to knock on the window when she tripped and fell. Embarrassed, she says, she walked back to the lobby.

A few minutes later, around 4:50 a.m., Morreira heard a woman screaming. She left her post to walk back outside and tell the woman that “they couldn’t be fighting.”

“As soon as I got closer, I could hear her yelling for him to wake up,” she says. Then she saw Christopher Cornett’s face illuminated by the sharp yellow glow of a dome light. “He was gray.” She knew Cornett, she says. He and his girlfriend had been at the motel for “a couple of weeks.” Based on the color and the cold feel of his skin, Morreira knew Cornett had consumed something to begin a fatal shutdown of his organs, brain and body.

Heat, she says, was leaving the 39-year-old’s body.

She slapped him. She screamed at the girlfriend to call 911. She stuck her fingers down his throat.

She is not trained, not at all, she says. She laughs. “I watch “Grey’s Anatomy,” that’s were my medical degree comes from.”

But she’s been here before. “I’ve actually seen people in that situation.” She says her ex-husband nodded off but survived when they were together in Baltimore. Her brother was not as lucky. He died from an overdose. “Heroin is one of my biggest fears. I know how quickly it goes. There’s just no sign, you just get hot and go.”

She pulled Cornett from the vehicle and the car moved into some bushes. She screamed at the girlfriend to tell dispatchers to tell police to hurry. “He’s not gonna make it if they don’t hurry,” she remembers saying. Then she started chest compressions, started mouth to mouth, started giving Cornett every atmosphere of her breath. “I could feel all of my air going into him.”

Officer Rowe arrived first. The 22-year-old recent hire of the Madison Police Department slammed his patrol car in park and yelled at Morreira to keep doing what she was doing while he prepared his Narcan. “I saw him (Cornett) laying on the ground and a lady beside him doing CPR,” he says.

He dosed Cornett with Narcan.

Narcan is a formulation of naloxone designed for the treatment of known or suspected opioid overdose. All Madison Police Department officers carry a dose, as do deputies with the Morgan County Sheriff’s Office. It’s a nasal spray that cheats death, that “may counteract the life-threatening effects of an opioid overdose,” literature on the spray says.

For Cornett, it wasn’t working.

Eaton says the few seconds that it took for the security gate at the city’s compound to open, where he had been getting gas, felt like an eternity. During that time, while that gate slowly inched open, he located his Narcan dose and had it ready. When he arrived, he leapt from his patrol car into a dark parking lot bathed in the blue light of a patrol cruiser with every pop, pop, pop of the light bar producing a frantic light. He remembers the hysteria of Cornett’s girlfriend, the way curtains were pulled aside in the motel rooms as people peaked outside and how ghoulish Cornett appeared. “I looked at Rowe and said, he’s gone,” Eaton says.

Regardless, he dosed him a second time and started compressions.

“He was ice cold when I got there, his skin was turning purple,” Eaton says.

Deputy Kitchens had arrived, too. Kitchens has seen this before, he says. He helped keep a gunshot victim alive long enough for EMS workers to arrive when he worked in Baldwin County and failed to keep a 2-year-old child alive after the child mistakenly consumed “some kind of pill” the child found on the floor.

When Kitchens looked at Rowe working compressions he says he thought that Cornett had “clearly overdosed.” Rowe did two rounds, 30 compressions each checking on pulse in between each round. Behind him, Cornett’s girlfriend was screaming “Please don’t stop, please don’t stop,” he says.

Morreira, out of breath and drained, was concerned, too. “I saw him get the first hit of Narcan and I’ve never seen anybody not come back from that,” she says.

Rowe moved aside and Kitchens took over.

Cornett’s arm shot up. According to Madison Police Department reports, “On Deputy Kitchens’ second round of compressions, Cornett took a deep breath and raised his right arm. A pulse was detected in Cornett’s left wrist. EMS arrived on scene and immediately took Cornett into the ambulance for treatment

A few minutes, maybe five, had passed. “It felt like a long time, Morreira says.

Eaton says officers are trained to continue giving CPR until EMS arrives. He says they are trained to keep pounding on a person’s chest to give the Narcan time to work. Having three officers arrive within seconds of each other to work together helped, he says. “If you’re by yourself you’re not going to stop,” he says.

At one point while Eaton was giving compressions, the back of his hand rubbed against Cornett’s stomach. “He was very, very cold. The coldest I’ve ever felt anybody.”

Officers found a black bag by the car. Inside the bag, reports state, they found suspected heroin, methamphetamine, Xanax, oxycodone, morphine and marijuana along with digital scales and a clear glass smoking pipe.

Cornett was taken to Morgan Medical Center and once cleared medically, he was arrested and faces a host of drug-related charges. He did not respond to a request for an interview.

Chief Bill Ashburn, Madison Police Department, says training and instinctive leadership in Eaton’s case has been a benefit to the department and community. “He is very quick to think on his feet,” says Ashburn of Eaton, a 12-year veteran with the department. “His leadership has for sure saved at least two lives.”

Morgan County Sheriff Robert Markley says a review of the brief, violent incident shows that training works. During pressure, “you default to your training,” he says.

“The number one thing is to preserve life,” Kitchens says. “Luckily we’ve got a good team where you’re just trying to keep the guy alive.”

For the rookie Rowe, there is more. “I don’t want to be the reason he dies,” he says. “When you look back on it you can say you did everything you could.”