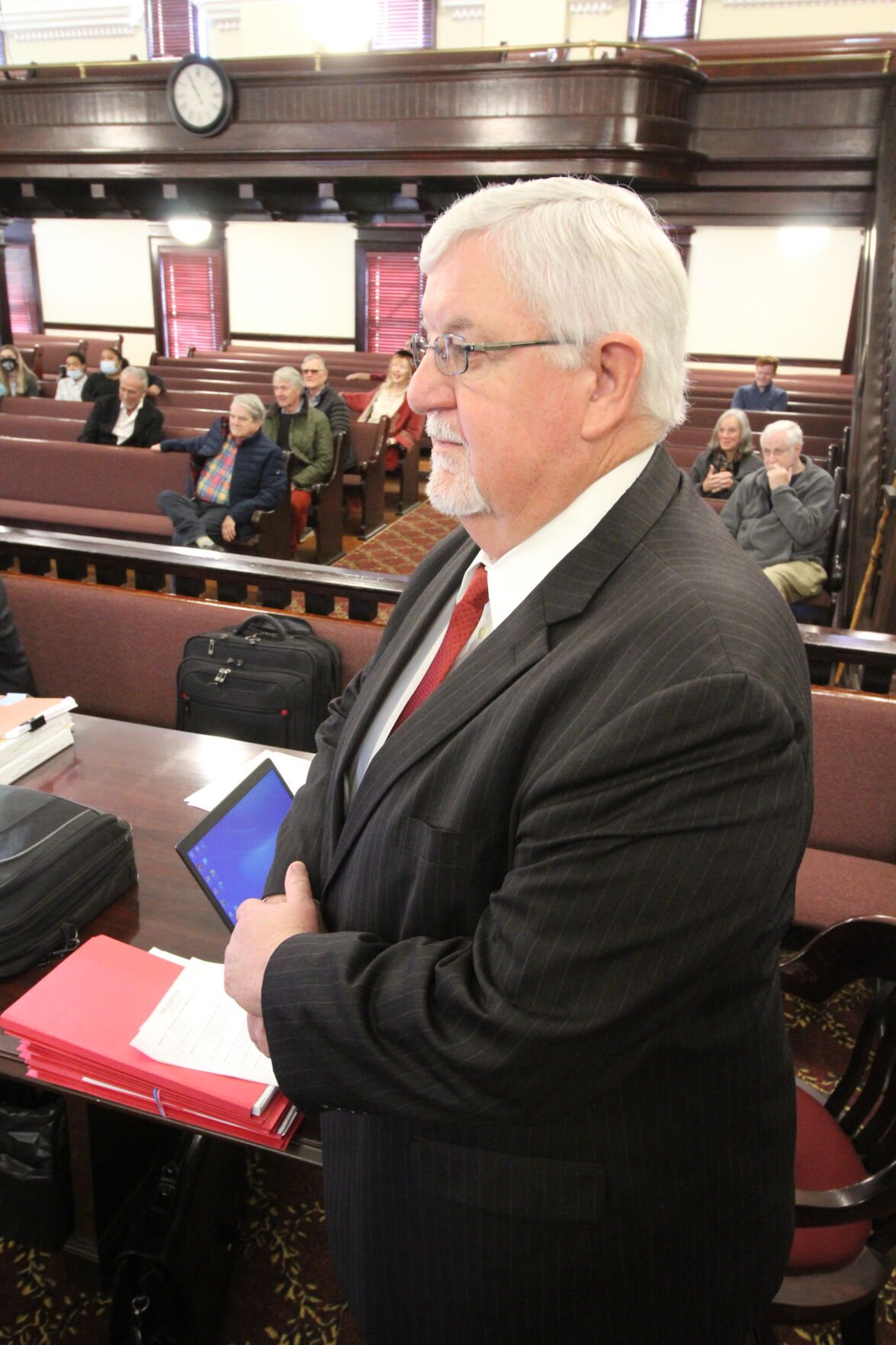 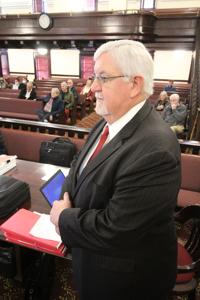 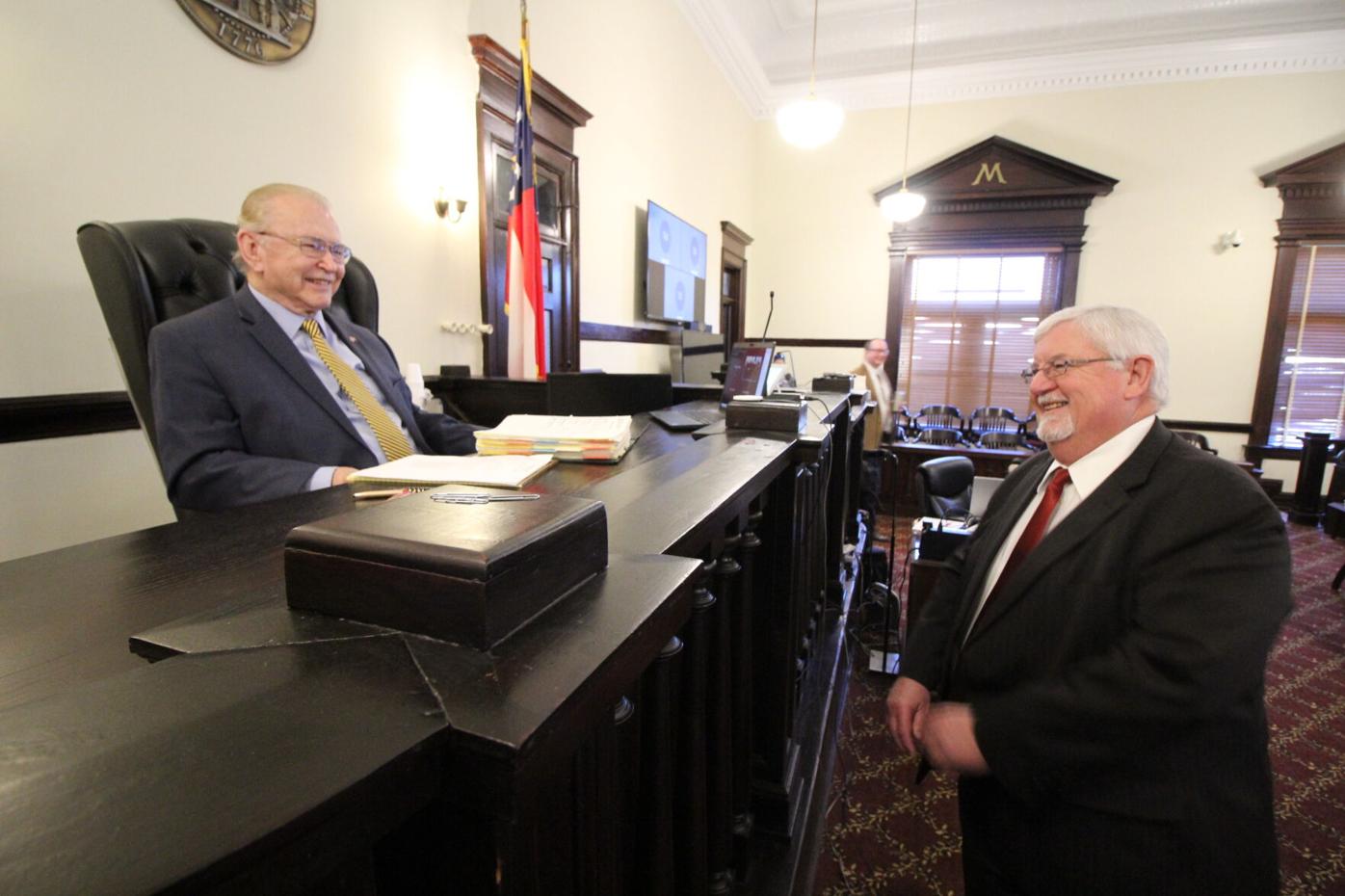 Retired public defender Darel Mitchell has a moment with Senior Superior Court Judge William “Billy” Prior on Mitchell’s last day on the job. 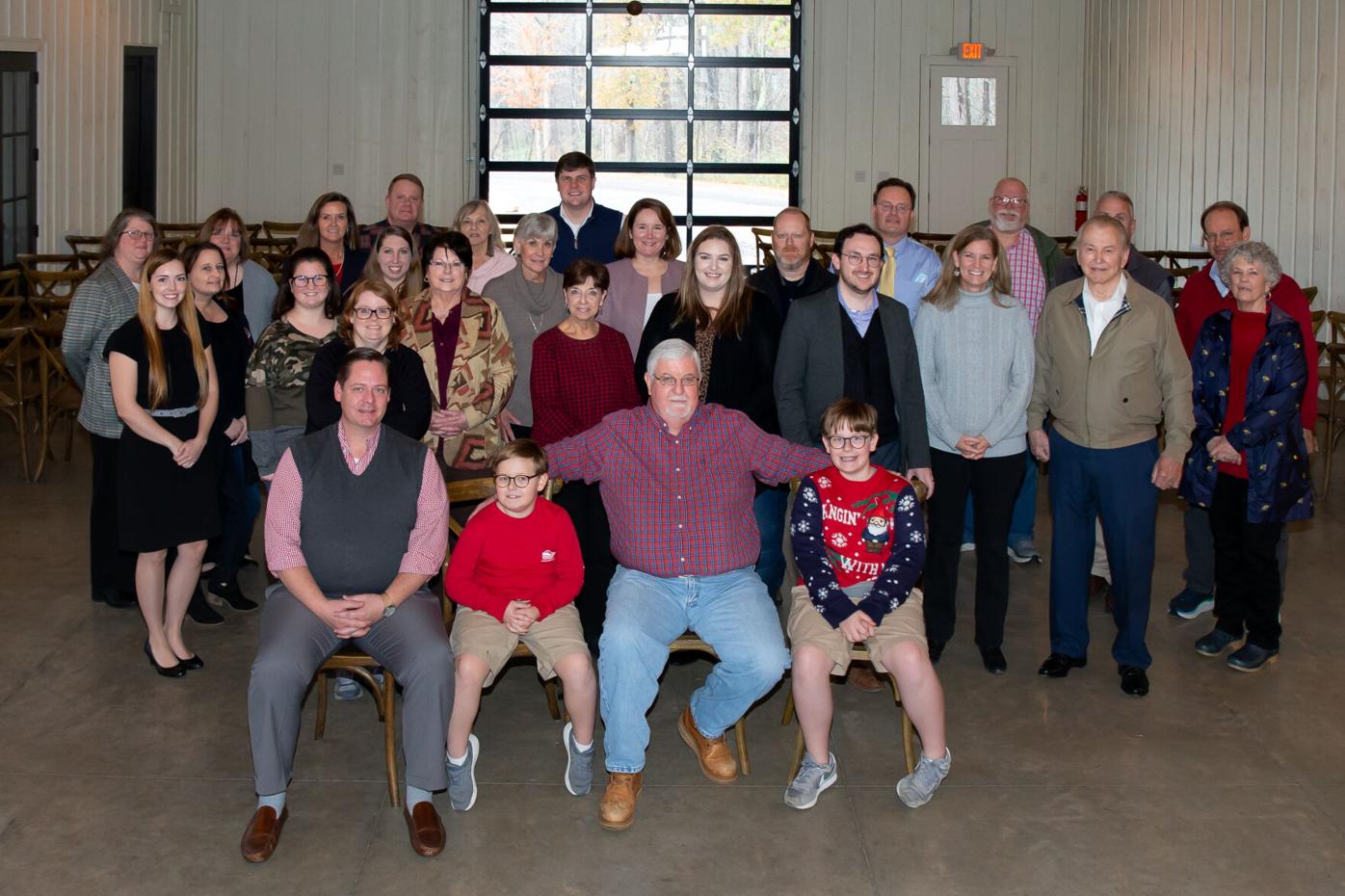 Assistant Public Defender Darel Mitchell with friends and well wishers during a surprise retirement held for Mitchell by courtroom employees. 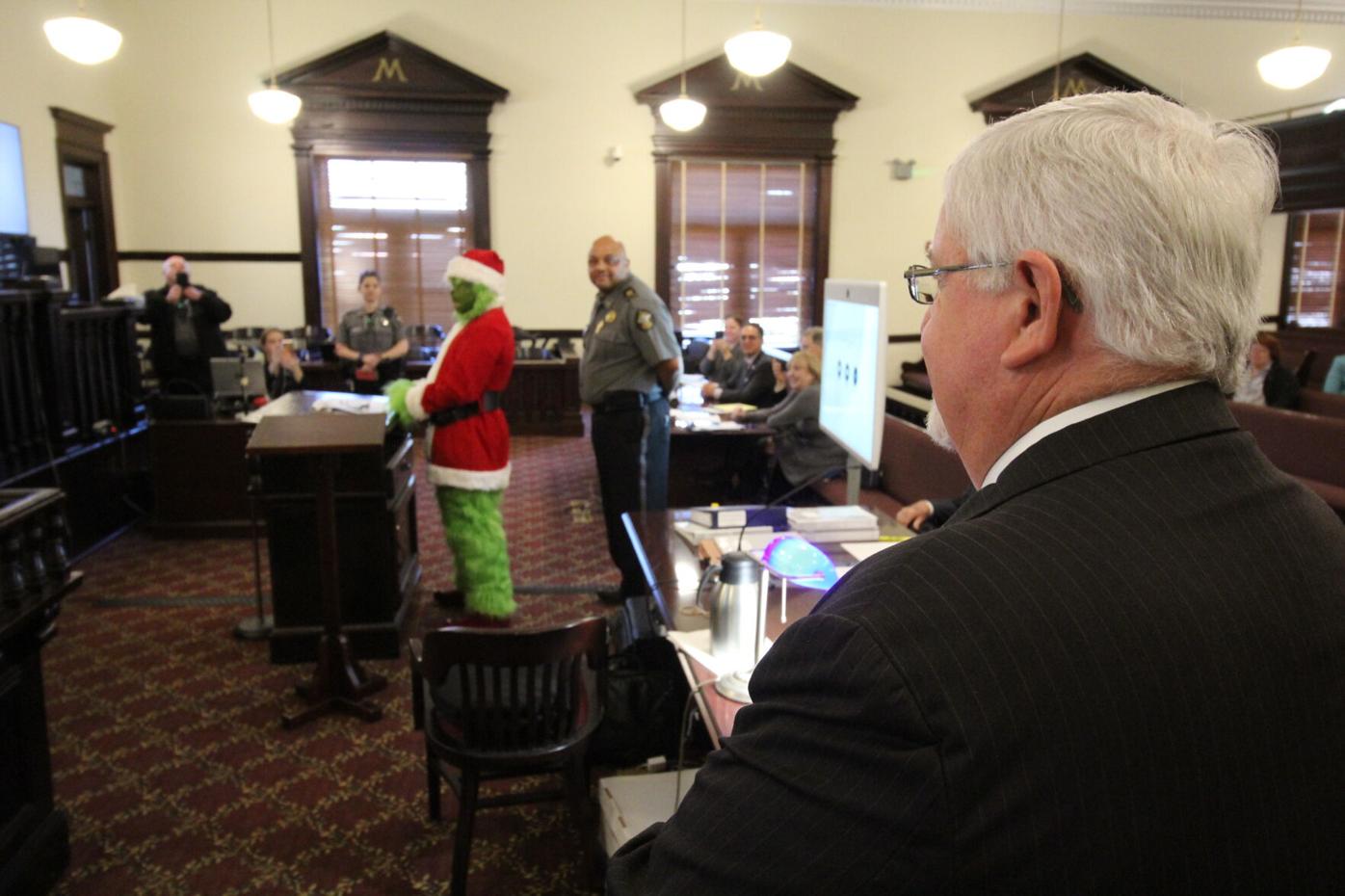 During Darel Mitchell’s last day in court as a public defender, “The Grinch” was apprehended by Morgan County authorities. A proclamation extolling Mitchell’s years of service was dropped by the suspect and read aloud to the courtroom by Superior Court Judge Stephen Bradley.

Retired public defender Darel Mitchell has a moment with Senior Superior Court Judge William “Billy” Prior on Mitchell’s last day on the job.

Assistant Public Defender Darel Mitchell with friends and well wishers during a surprise retirement held for Mitchell by courtroom employees.

During Darel Mitchell’s last day in court as a public defender, “The Grinch” was apprehended by Morgan County authorities. A proclamation extolling Mitchell’s years of service was dropped by the suspect and read aloud to the courtroom by Superior Court Judge Stephen Bradley.

Barksdale said the attendees were all anyone would every need to know about Mitchell.

“There were superior court judges, your sheriff, court workers,” Barksdale said. “That says more than anything.”

Mitchell served his last day in the Morgan County Courthouse on Wednesday, Dec. 22, fittingly before now Senior Judge William “Billy” Prior, during a motion day where several plea agreements were taken by the court. “The Grinch” arrived with a special declaration read by Superior Court Judge Stephen Bradley and Mitchell, with his usual aplomb, sat at the defense table with a bemused look on his broad and friendly face.

Gone, he says, are the stacks of reddish-pink file folders for each defendant that fill plastic storage bins at his office at the Morgan County Public Safety Center. His office, a spartan affair decorated, in part, with four stylish mid-century chairs Mitchell took from his father’s law office in DeKalb County, sits next door to where families and loved ones can video chat with inmates at the Morgan County Detention Center.

It is where, for the past 17 years, the 67-year-old Mitchell has practiced law as a public defender in both Morgan and Greene counties. Mitchell has been a member of the Georgia Bar for 40 years and will remain a practicing attorney, he says, but the Ocmulgee Judicial Circuit has lost, by all accounts, one of its best indigent attorneys.

Across the board, Mitchell’s peers acknowledge a man who says he “got the trial bug” when he was in his late 20s and won an acquittal on a driving under the influence charge for a client.

“He brought a ton of experience to the circuit,” she says. “You don’t normally get that at the local public defender’s office.”

Mitchell says, on average, he has represented 434 clients per year for the past 17 years, more than 7,000 cases. The jovial Mitchell says, with understatement, the case load is “very stressful.”

Mitchell learned the law while sitting in his father’s courtroom as a teenager. Judge J. Oscar Mitchell served as a State Court judge in DeKalb County for more than 25 years.

“I would sit and watch trials,” Mitchell says. In Mitchell’s career he has worked more than 300 jury trials, including murder, child molestation and armed robbery arrests.

“This is what I am trained to do,” he says. “Criminal defense is what I gravitated to.”

Barksdale says Mitchell is a “straight shooter” that knows “how to treat human beings.”

Burks says Mitchell will “speak to a judge presiding over a trial and someone who has been in jail with the same level of respect.”

“That’s tough to do in this world.”

Burleson, who served as an assistant district attorney in the Ocmulgee Judicial District for eight years before becoming a superior court judge, battled with Mitchell on countless criminal cases. She says Mitchell has a perfect attitude for the job.

“He takes his job seriously, but he doesn’t take himself seriously,” she says.

“We slugged it out. Sometimes he beat me and sometimes I beat him but I can’t think of a single case that, when it was over, either that day or the next we sat down and had lunch because he is a professional.”

Morgan County Sheriff Robert Markley says Mitchell has been an important part of a sometimes laborious system. “He’ll be missed by the public defender’s office and the sheriff’s office because he was an integral part of keeping the justice system moving and he did so in a professional manner.”

Mitchell says he has labored under the belief that all deserved a chance for representation, regardless of ability to pay. The job, he says, can be both fulfilling and frustrating.

“You are going up against Goliath,” he says of his notorious cases, “and you don’t have a rock in your sling.”

Despite the frailties inherent with indigent representation, Mitchell says lawyers that work the defense side of the system are invaluable. “It’s the best system in the world and we try to make it work,” he says.

For the past 17 years he has worked juries for his clients and done so in a way that impressed former District Attorney Stephen Bradley who now serves as a Ocmulgee Judicial Circuit superior court judge.

“He’s great in front of a jury,” says Judge Bradley. “He’s good at finding the issue that needs to be litigated. It’s a shame that he is retiring. Most of us in this circuit have begged him to stay.”

Mitchell’s retirement will leave a void in the public defender’s office. With his announcement, the office now provides seven attorneys for an eight county circuit and is seeking to add three more attorneys to handle the expanding case load. “We are clogged,” Mitchell says. “We are backlogged.”

Barksdale says Mitchell’s clients may not have realized the breadth of experience they were receiving. “He is one of the best public defenders in the circuit. The indigent defendants were getting a great attorney.”

Barksdale says he will miss Mitchell’s part he played in the system. “If you don’t have a public defender, and a good one, that is when the wheels of justice start slowing to a halt. He’s been a big piece of that for a long time,” he says.

“He is a big personality.”

The ATCC, commonly known as “Drug Court” is one of Mitchell’s favorite programs that provides offenders with a chance and, he says, some respect if they follow the court’s strict guidelines.

“It’s giving somebody a hand up in life,” he says. “It works. It doesn’t work in every case but it works enough to keep going.”

But in January of this year, he plans on working on a lake house. He just had a new engine dropped in his old red pickup truck that has become his calling card outside the Morgan and Greene counties courthouses. He says for a while he is going to let his mind stay at rest.

“I don’t remember not having a pen and pad on my night stand,” he says.

It’s been worth the effort, he says. “That’s the one thing that kept me going the last few years. In some small way I thought I could change the life of someone in a positive way.”