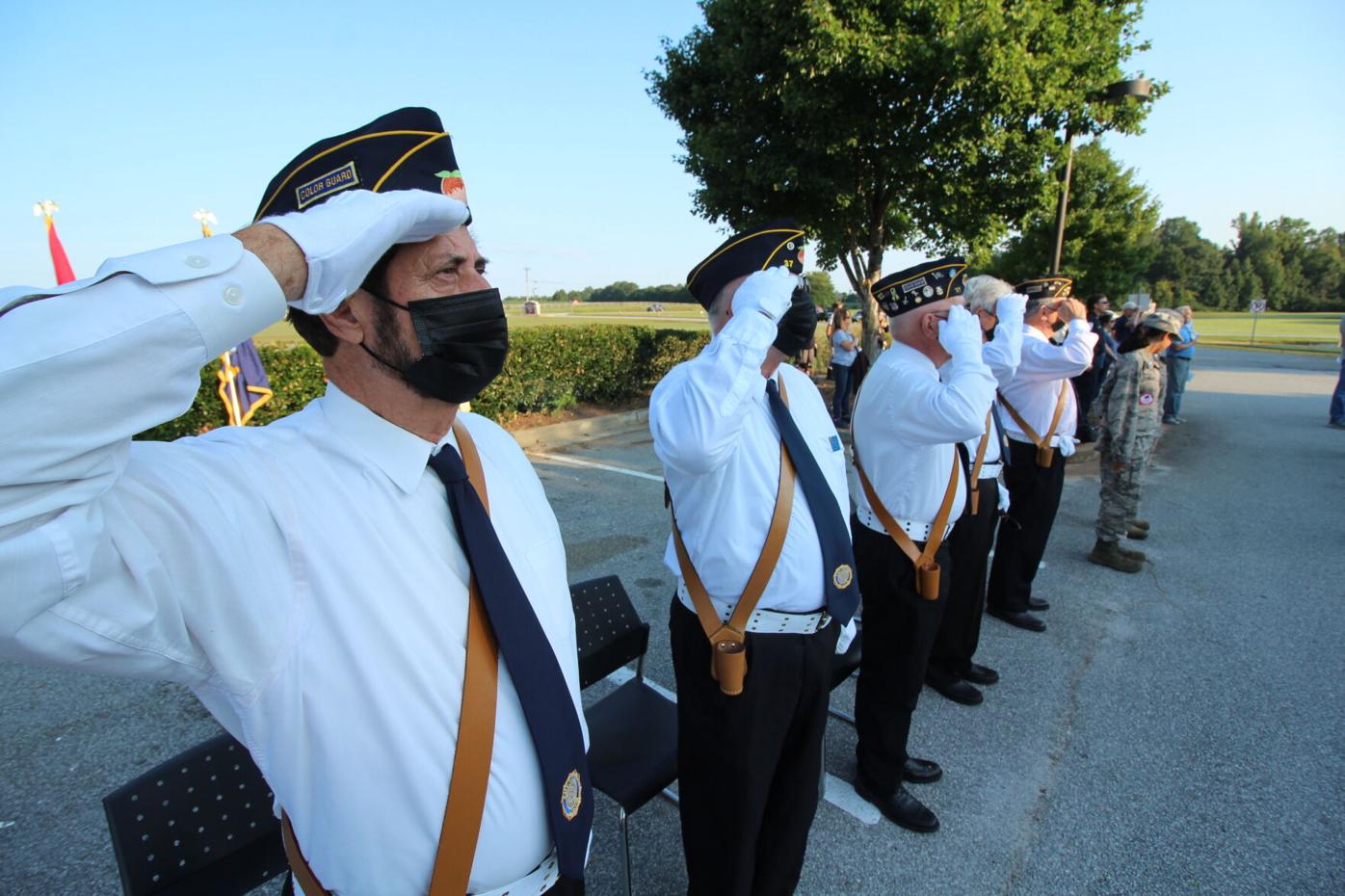 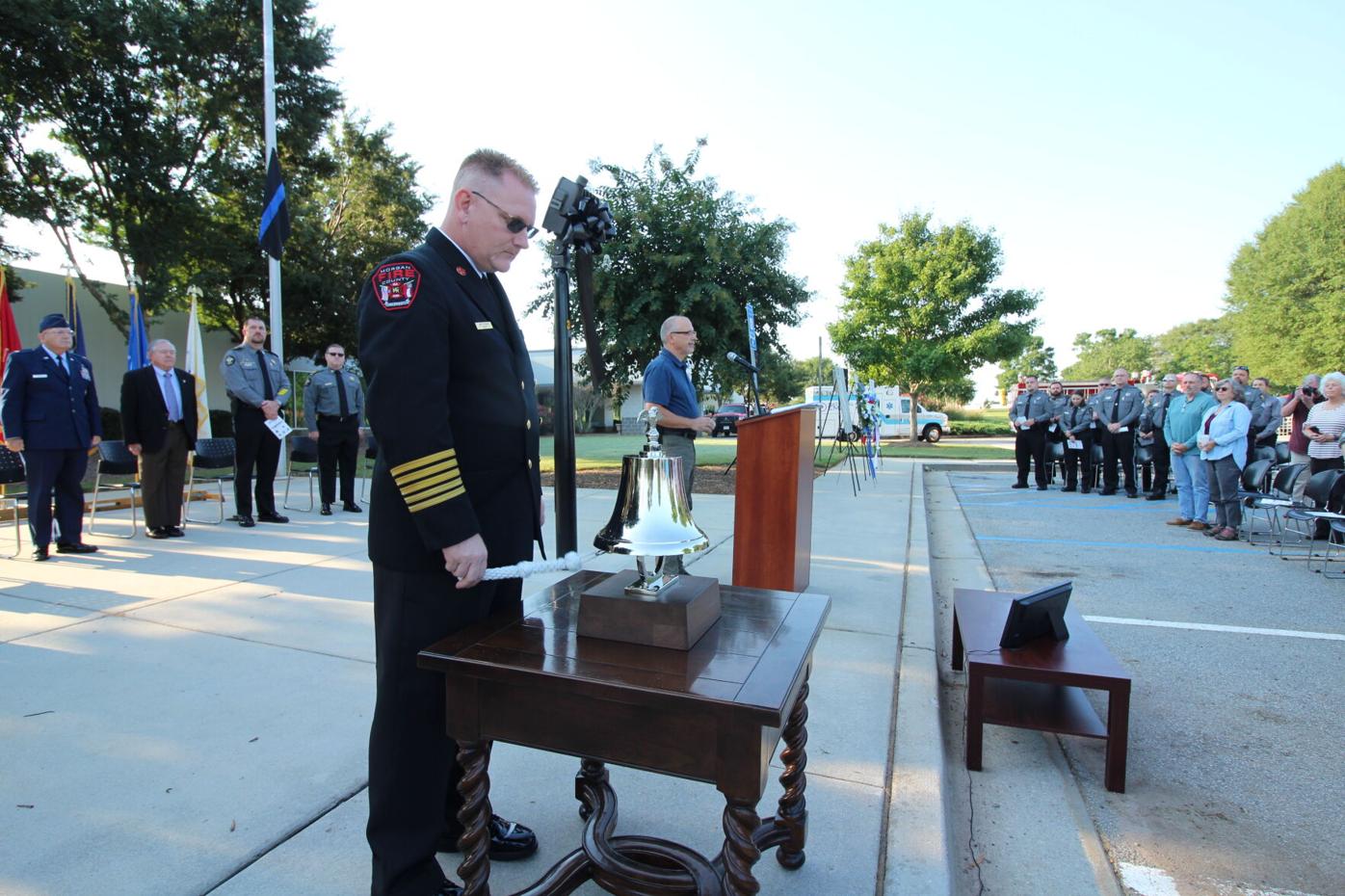 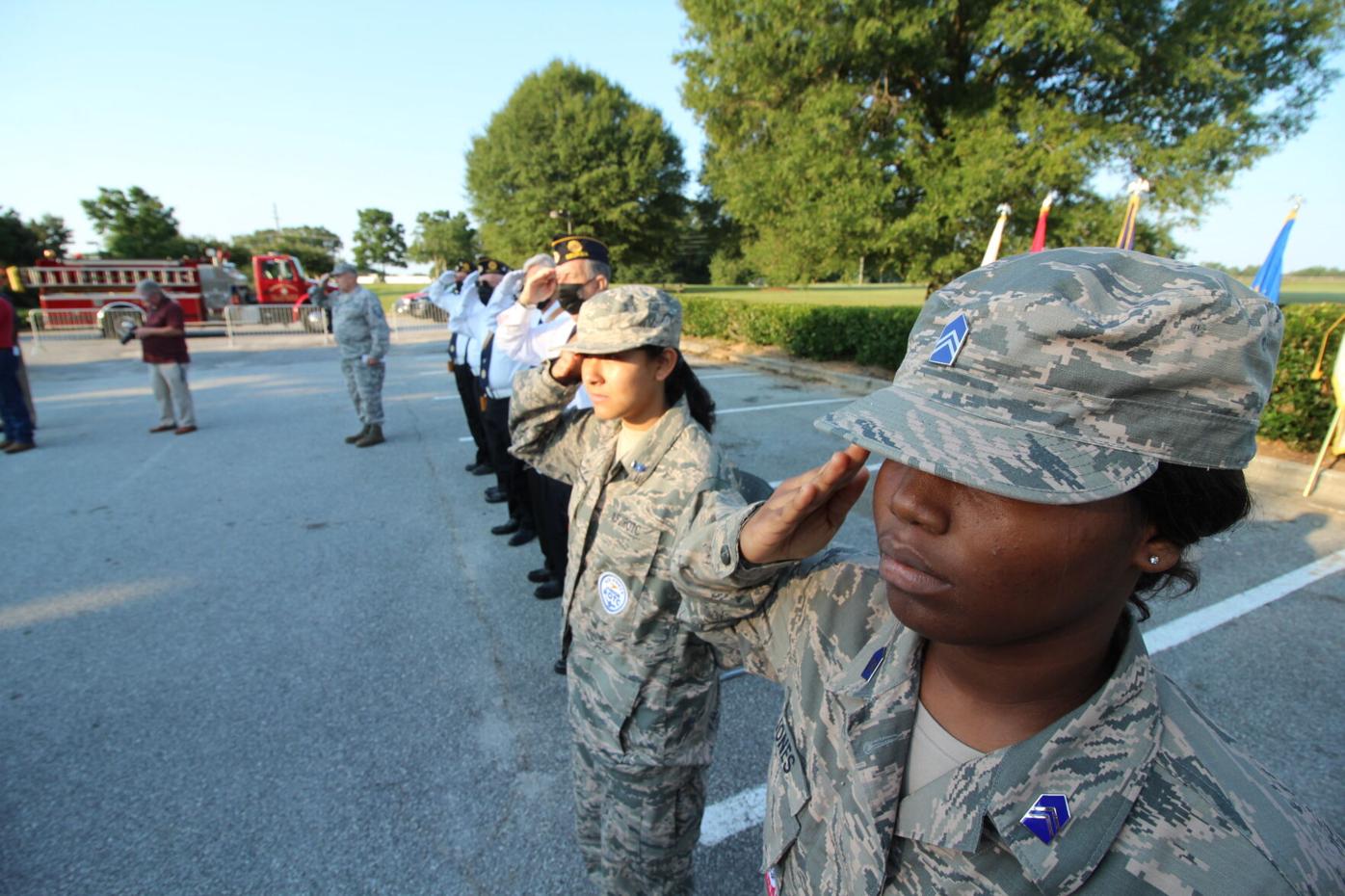 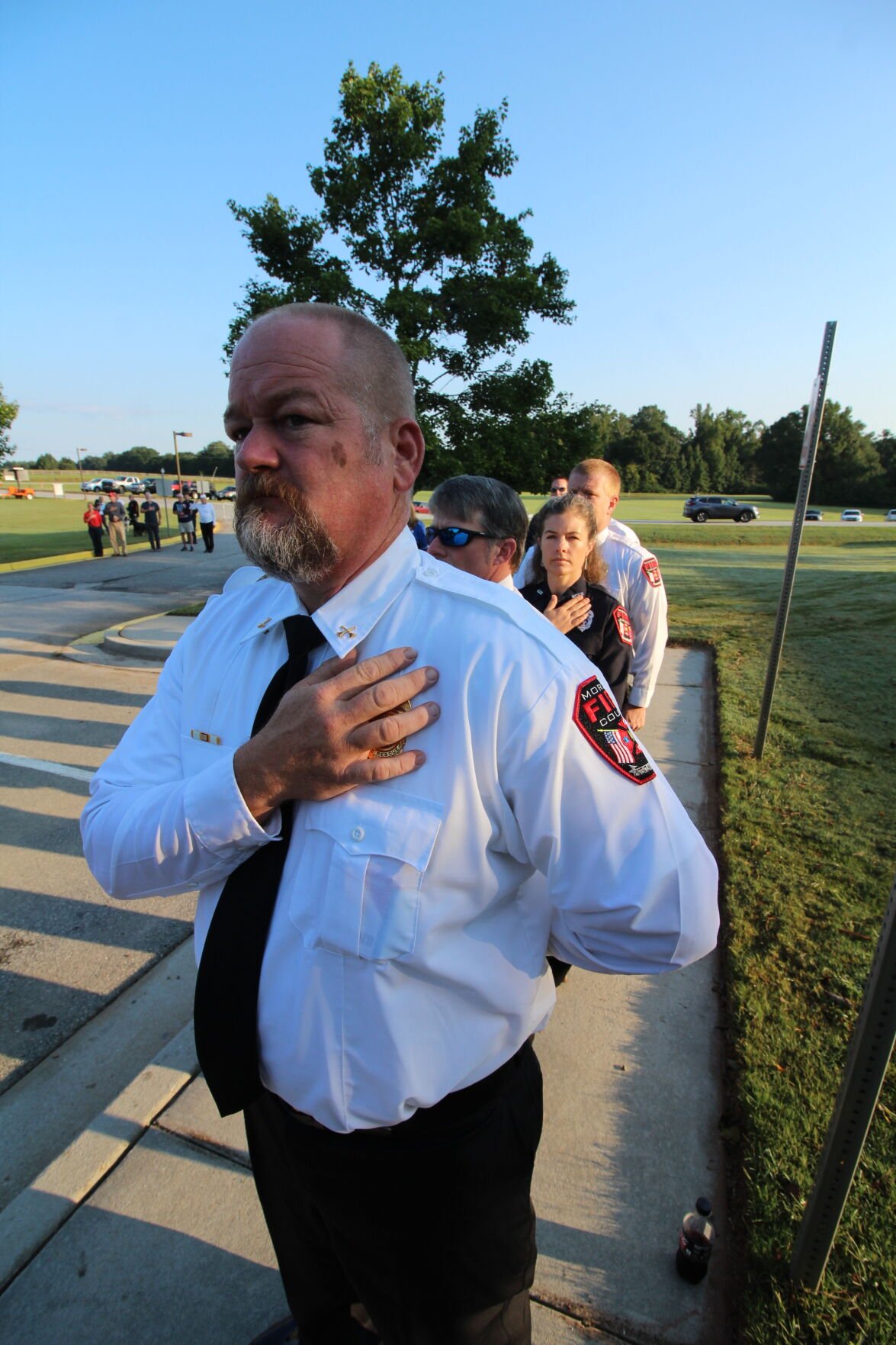 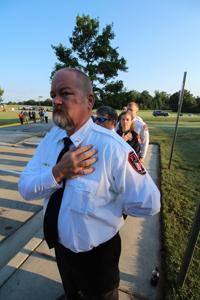 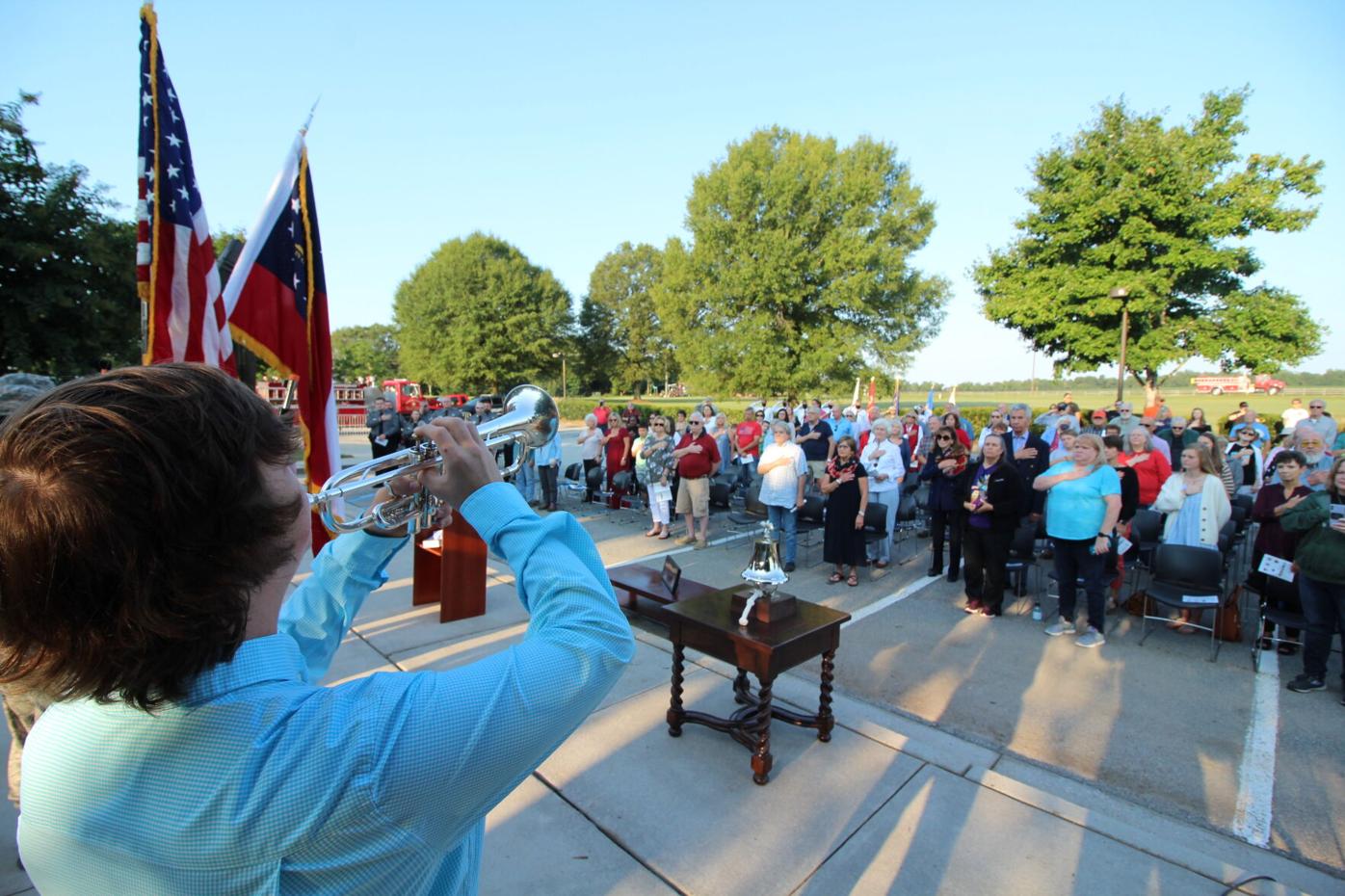 It was a day, said Keith Howard, chief deputy, Morgan County Sheriff’s Office, that “none of us will ever or should ever forget.”

It was a day, said Pastor Mike Pritchett, a former investigator with the Morgan County Sheriff’s Office, to “remember those who put themselves behind the need of others.”

Both were speaking of the transformative effect of the Sept. 11, 2011 terrorist attacks on American soil that, with a flashpoint of violence, took the lives of the nearly 3,000 Americans.

Flanked by decorative wreaths honoring fire fighters, law enforcement and emergency workers, a dais of speakers including Lt. General Steve Whitcomb, U.S. Army retired, spent approximately 45 minutes Saturday morning honoring the fallen from the tragic day. More than 200 people gathered in the parking lot of the Morgan County Public Safety Center, Monticello Highway, to bear witness to the speakers honoring the fallen and the men and women of Morgan County’s emergency services who were represented by sharp-angled lines of officers in full dress uniforms.

“That morning, Americans woke up free and the citizens of 90 nations at the World Trade Center were benefiting from that freedom. Then the world watched as that freedom was gone in terrifying minutes as carnage was repeated four times over the course of the morning,” Whitcomb said.

“Over the years we learned too well how the events of that day unfolded and the individual impact on lives, families and our nation. And our military continued to pay the price in wars to defend our freedoms. I pray we never forget the horror of 911 or to honor the price to defend.”

The event was organized by the Morgan County Sheriff’s Office and the Morgan County Fire and Rescue and included three separate moments of deafening silence broken only by the buzzing of truck tires rolling past on the highway.

For Whitcomb, an 11-year resident of Morgan County and veteran of Desert Shield/Desert Storm, the moment called for a reflective remembrance of the emergency workers who served both that day and who spend selfless hours serving every day.

“On that day there were certainly individual acts of self sacrifice. But today I want to single out the collective selfless heroism of those first responding fire fighters, police officers and medical teams that rushed into the infernos while others rushed out,” he said.

“The word hero is too casually tossed about today,” he said. “Sports heroes, movie heroes, billionaire ‘Hero spacemen.’ But there is nothing casual about the heroes our police officers and fire fighters were that day and are everyday and everywhere.”

Through it all, the speakers, the guard, and for many in the crowd, the words had a heavier weight because they were served by men both still in the arena of community service and by men who have served.

“I pray we assembled here this morning remember every day and give thanks for what we ask of those on the beat, at the station house waiting for the alarm to sound and those standing on the front lines around the world in places we can’t spell or find on a map like those 11 young Marines, a soldier and a sailor who stood on Aug. 26 at Kabul Airport, simply because America asks,” Whitcomb said.

“On this day of remembrance and honor, may we as citizens be as vigilant of our freedoms as they that guard them. May God bless those that serve to protect and May God to bless the United States of America.”