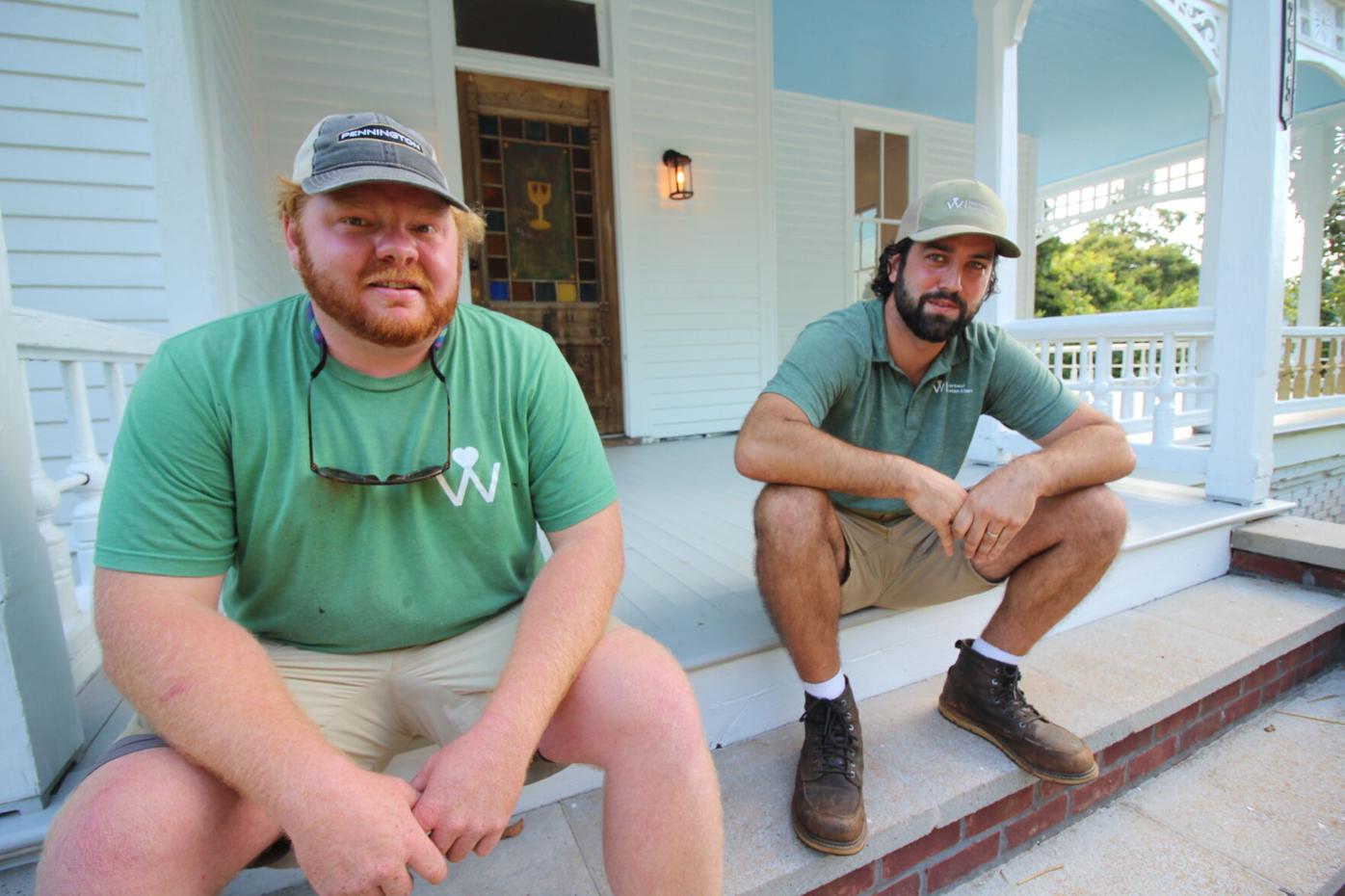 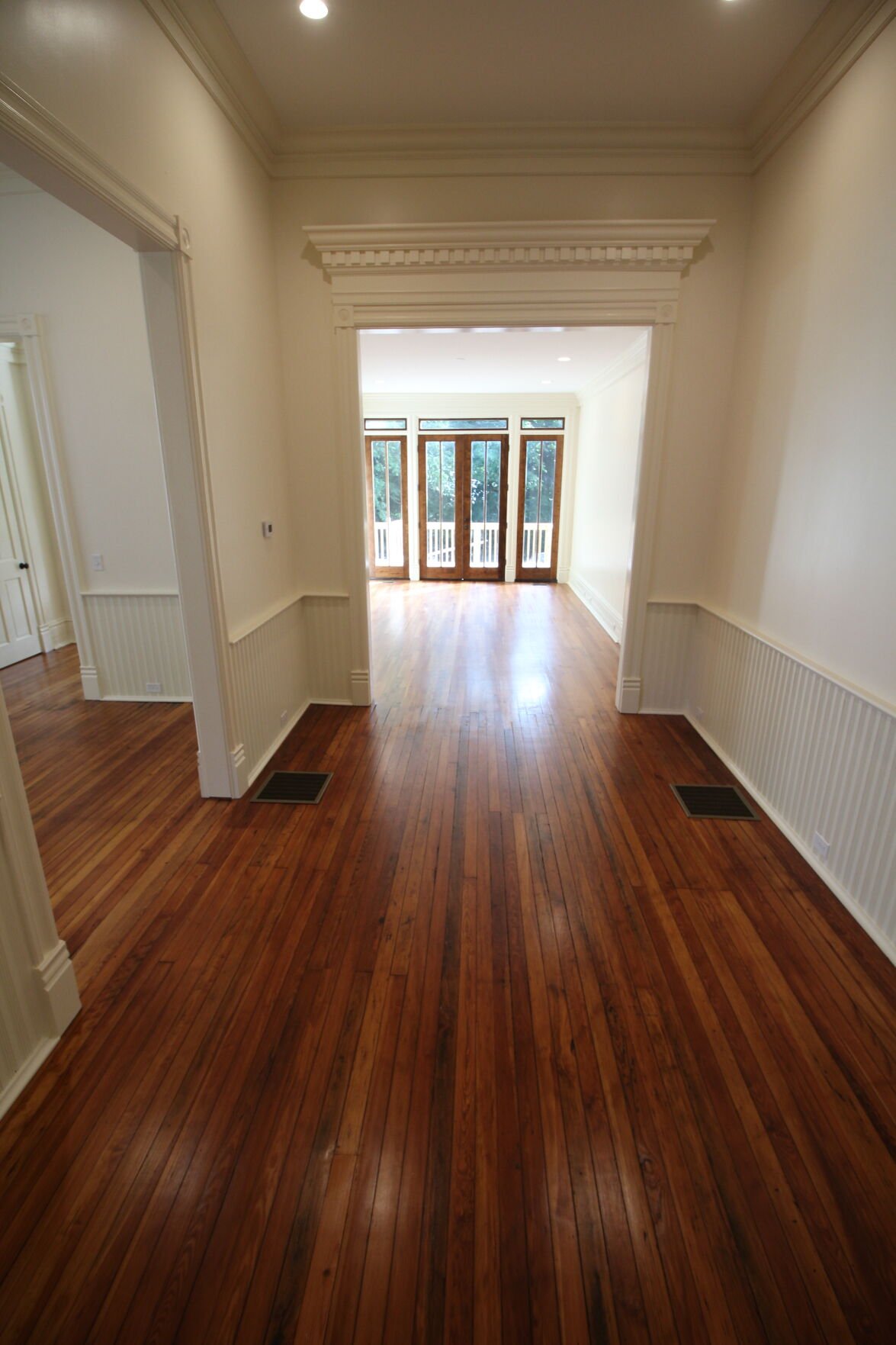 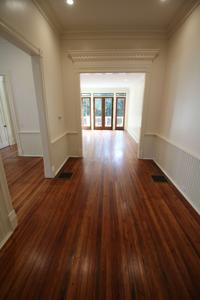 The heart pine flooring that was original to the house was restored and a handmade trim profile was created for the historic structure. 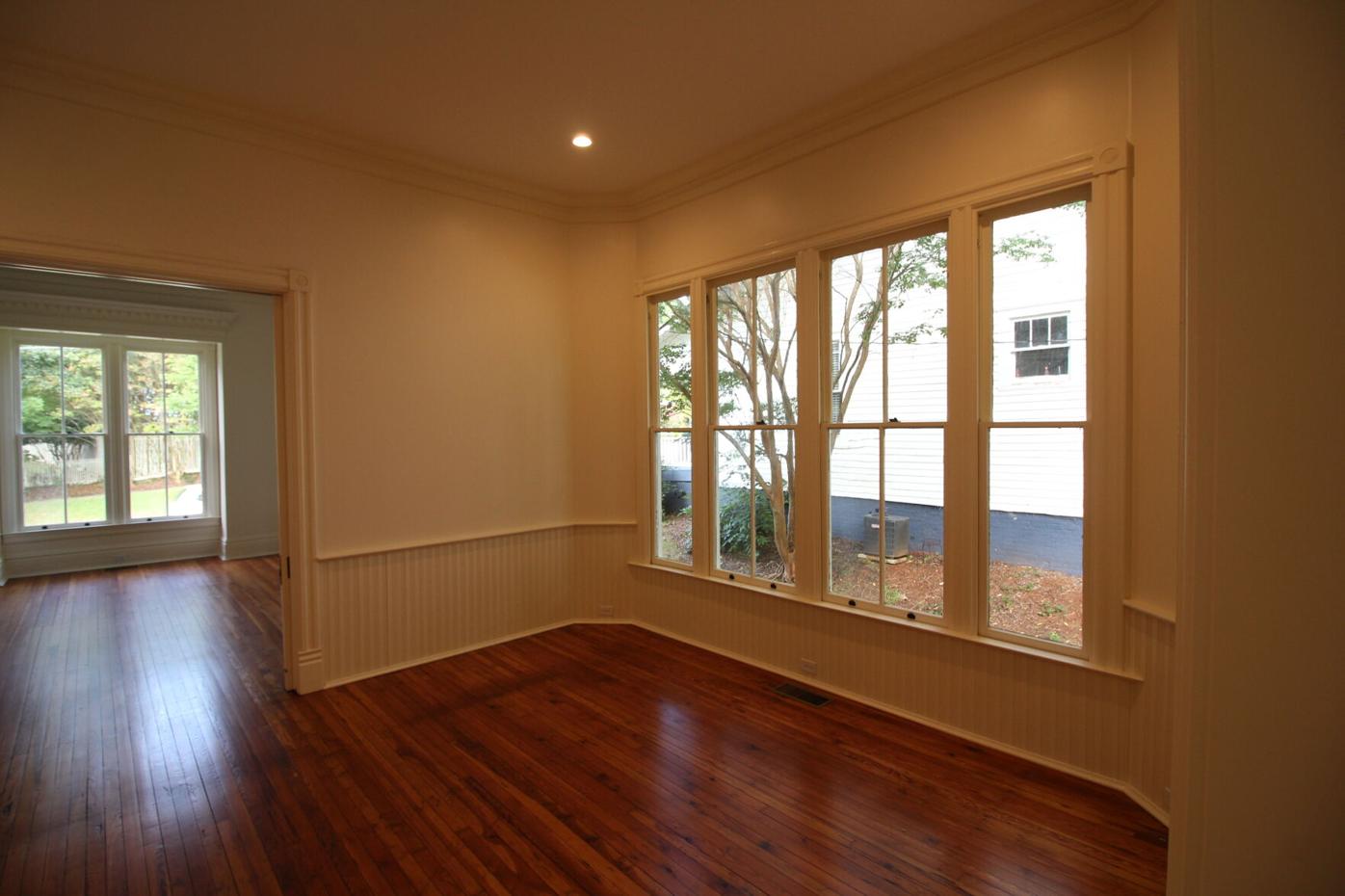 Twelve and a half foot ceilings and 8-oot doors set the grand stage for the living room of the house. 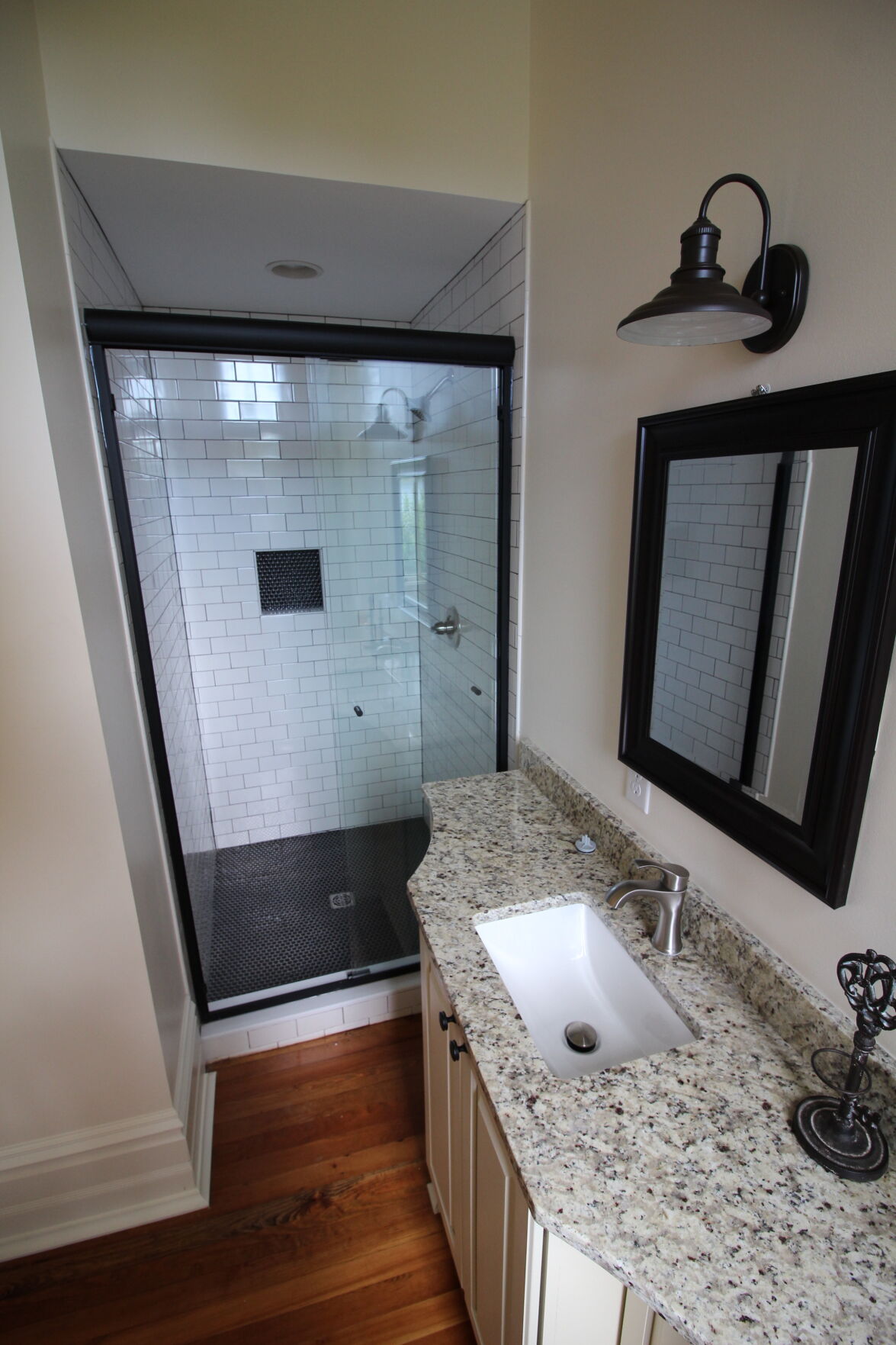 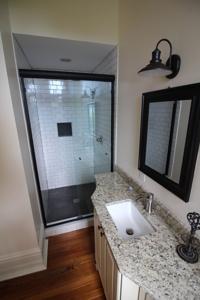 A master bath with update fixtures and shower make for a stunning addition to the house. 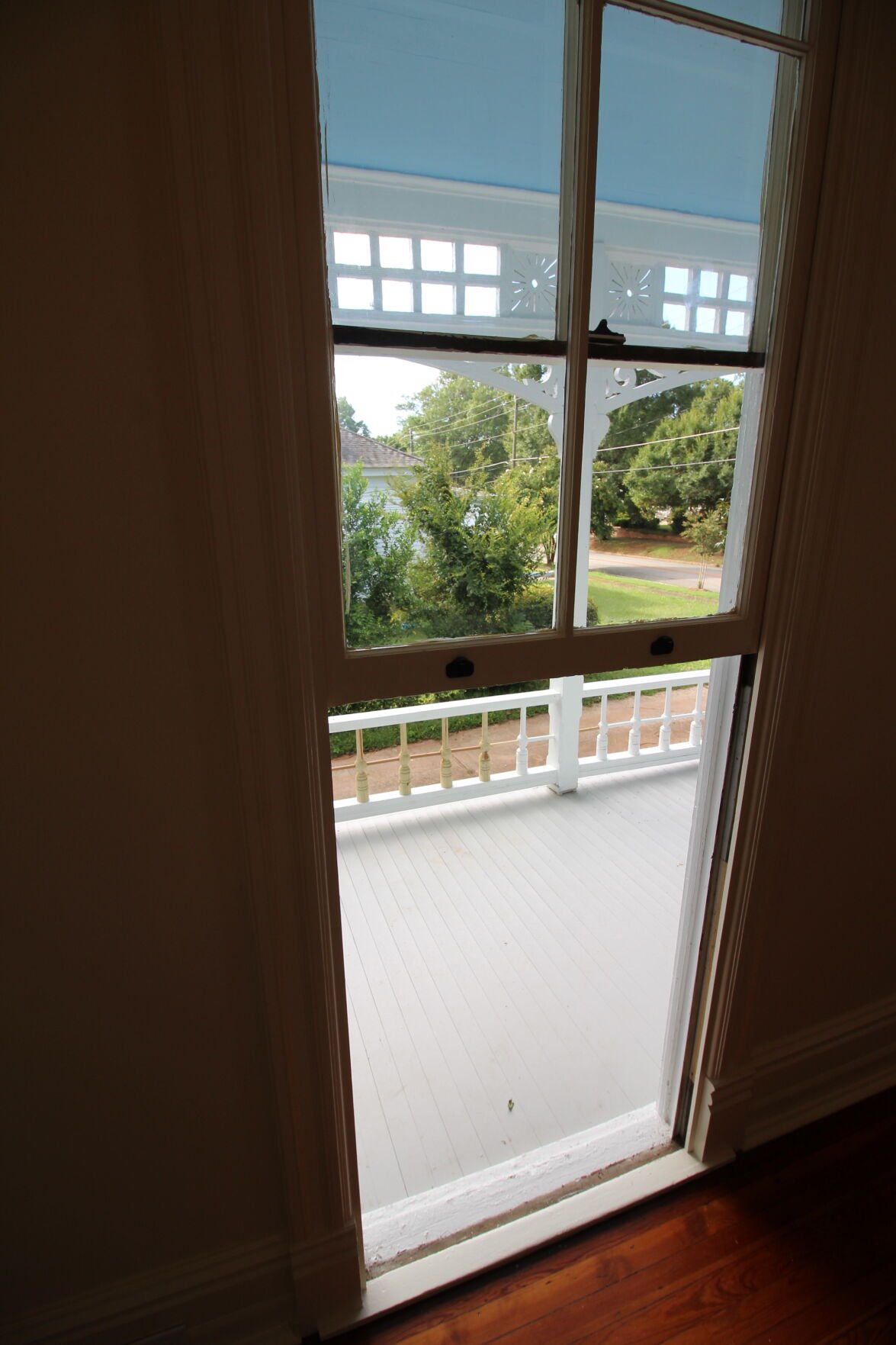 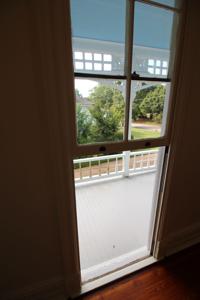 A floor to ceiling functioning window overlooks the side of the wrap around porch.

The heart pine flooring that was original to the house was restored and a handmade trim profile was created for the historic structure.

Twelve and a half foot ceilings and 8-oot doors set the grand stage for the living room of the house.

A master bath with update fixtures and shower make for a stunning addition to the house.

A floor to ceiling functioning window overlooks the side of the wrap around porch.

Once they cleaned out the family of raccoons, the possums and squirrels, it was time to go to work, says Zack Sittler, owner of Heartwood Custom Builders.

Sittler and his assistant Hanson Baldwin have spent the last nine months bringing a Victorian Queen Anne house on Madison’s East Washington Street back to its late 1800s glory. The house, a 2,300-square-foot, three-bedroom, three-bath structure, had sat practically abandoned for years. And, worse, prior to its vacancy, work on the historic home had been “confusing,” Sittler says.

When you opened the front door there was “a staircase that went to nowhere.” The house had exposed openings. “Pieces of wood were hanging down from the ceiling,” he says.

“No one had any vision for it. Somebody tried to do some work but there was no thought process behind it.”

Sittler and his company were hired by new owner Sandy Sanford to renovate and basically rebuild the structure. Sanford, a Morgan County entrepreneur, says he was able to purchase the house at the right price to finance its salvation. When he walked past the exposed wires, the jagged tombstone smile the Queen Anne presented to the street, he says he saw something special. “I like old houses,” says Sanford. “The material is ageless if you keep it dry.”

Sittler and Baldwin and a host of helpers cleaned the palette of the structure and in doing so made a unique discovery in the attic above the house’s 12-and-a-half-foot high ceilings. Stored in the attic were original pieces of molding, not enough to replace the missing and torn pieces, but enough for a vision. “We had a sample of every (trim) profile,” Sittler says.

Sittler brought a unique perspective to the rebuild. Born and raised in Cooperstown, N.Y., Sittler started painting houses in upstate New York when he was 15. His older brother, Adam, is a carpenter and Zack gravitated to the work.

Where he was raised, “most of the houses are pre-1850,” he says, “so we just kind of fell into it.” He learned furniture making and cabinetry at the College of the Red Woods in California and at one point in his young life, was a member of the carpenter’s union. In 2017 he moved to Morgan County got his contractor’s license and after he did several “small scale renovations,” word of his work and artistry spread. “A lot more opportunities opened up. I have experience working on older houses and really that’s where my heart is.”

Baldwin joined him as a laborer in 2018 and has quickly learned the trade, Sittler says. “He’s come a long way and has a great work ethic.”

“From the time he started with me, I knew he would stick around for a while.”

Baldwin says he is “right where I need to be” and is enjoying the journey of learning a timeless trade.

Despite the back-breaking and methodical work to renovate and reconstruct, Sittler says the other component of performing a complete renovation includes appreciating the original intent of the build. “You have to understand the scale that’s used in old houses,” he says.

Heart pine flooring in the house was recovered and re-used. The rear of the structure was once a porch and is now a stunning kitchen with updated appliances and countertops. Throughout the unique layout the plaster walls are adorned with trim that Sittler and Baldwin hand-made with a milling machine on site using the samples they found in the attic. “This house was the first house we got to make trim in a large scale,” he says.

The floor joists at the back of the house had rotted and had to be removed. “The house was gutted entirely. We stripped it down to the studs. We essentially rebuilt the house from the inside out.”

Interior doors are eight feet tall to fit the scale of the expansive rooms. In one bedroom that looks out over a rebuilt front wrap around porch are floor to ceiling windows.

The completed work is breath-taking. “This house had a lot going for it,” says Sittler. “When people talk about the character of old houses, it’s this,” he says waving at a hallway filled with handmade trim and renovated pocket doors.

And Sanford, who is going to use the house as a rental, is “very pleased with the job.” For Sanford, beyond the business application of renovation is sentiment.

“There is a satisfaction you get keeping old houses alive,” he says.