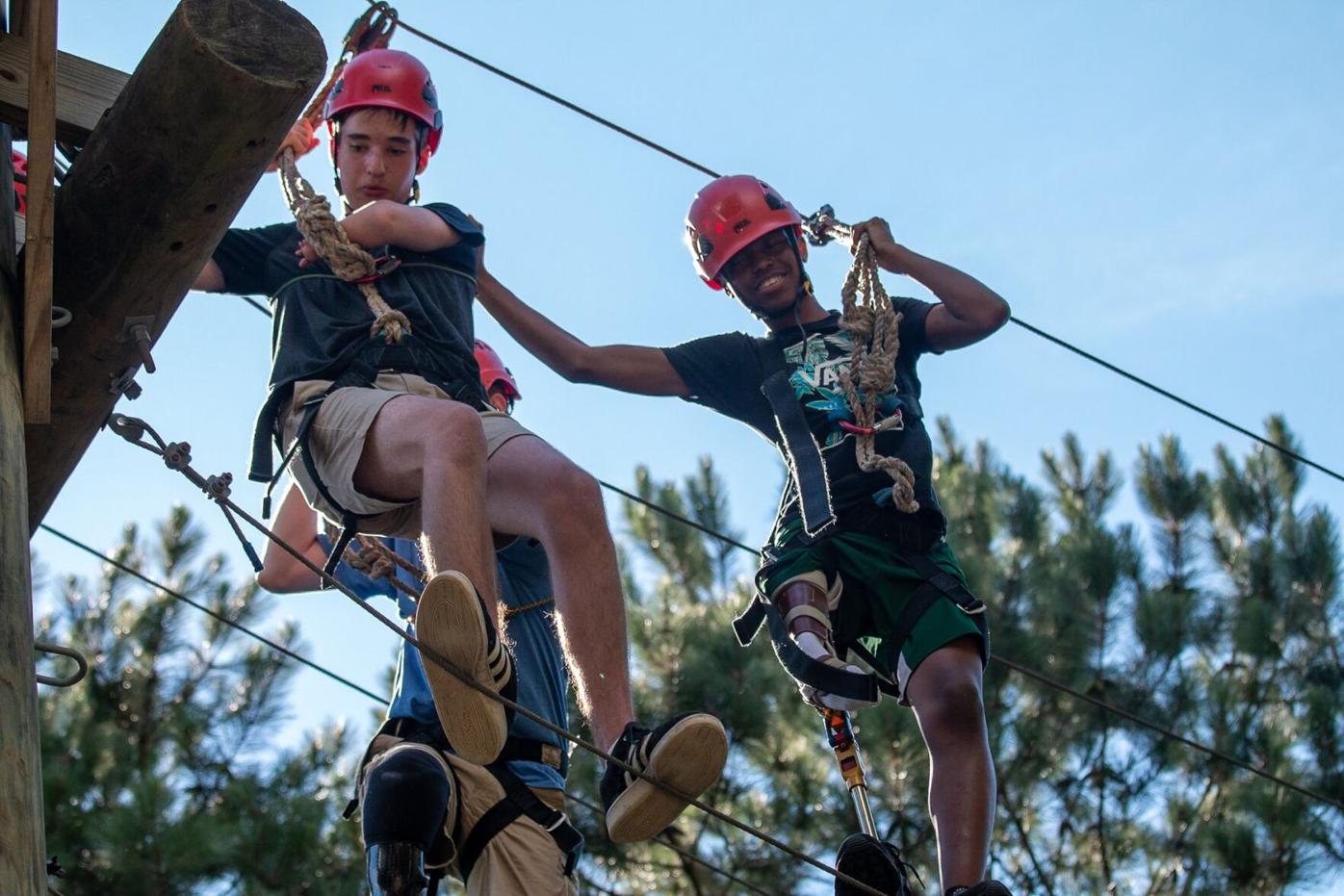 The ‘No Limb Ropes Course’ is specially designed to give campers freedom and opportunities at Camp Twin Lakes. 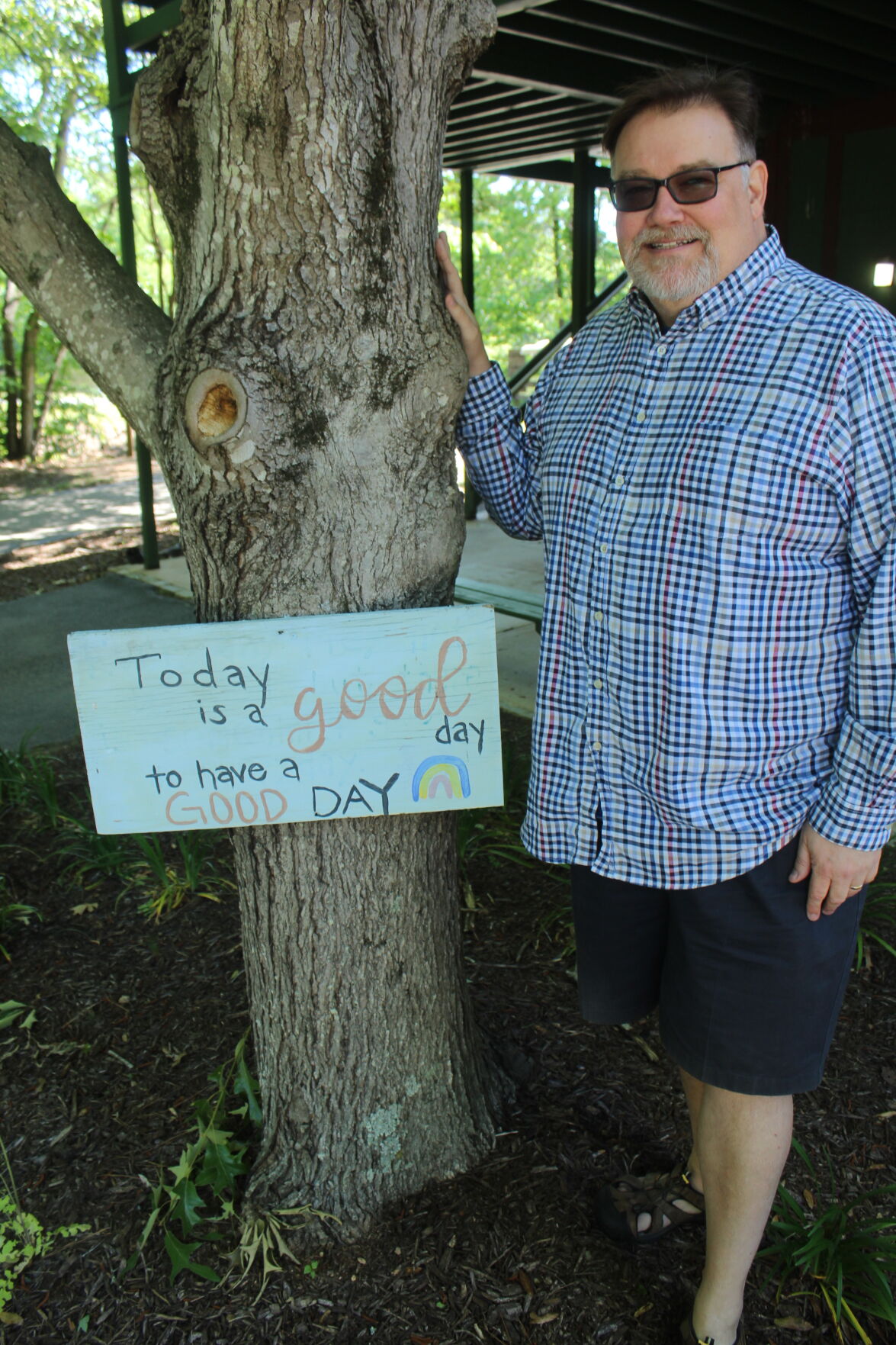 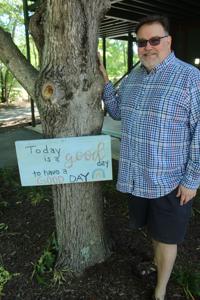 Dan Mathews, program director of Camp Twin Lakes, with one of the many motivational signs nailed on trees through the property. 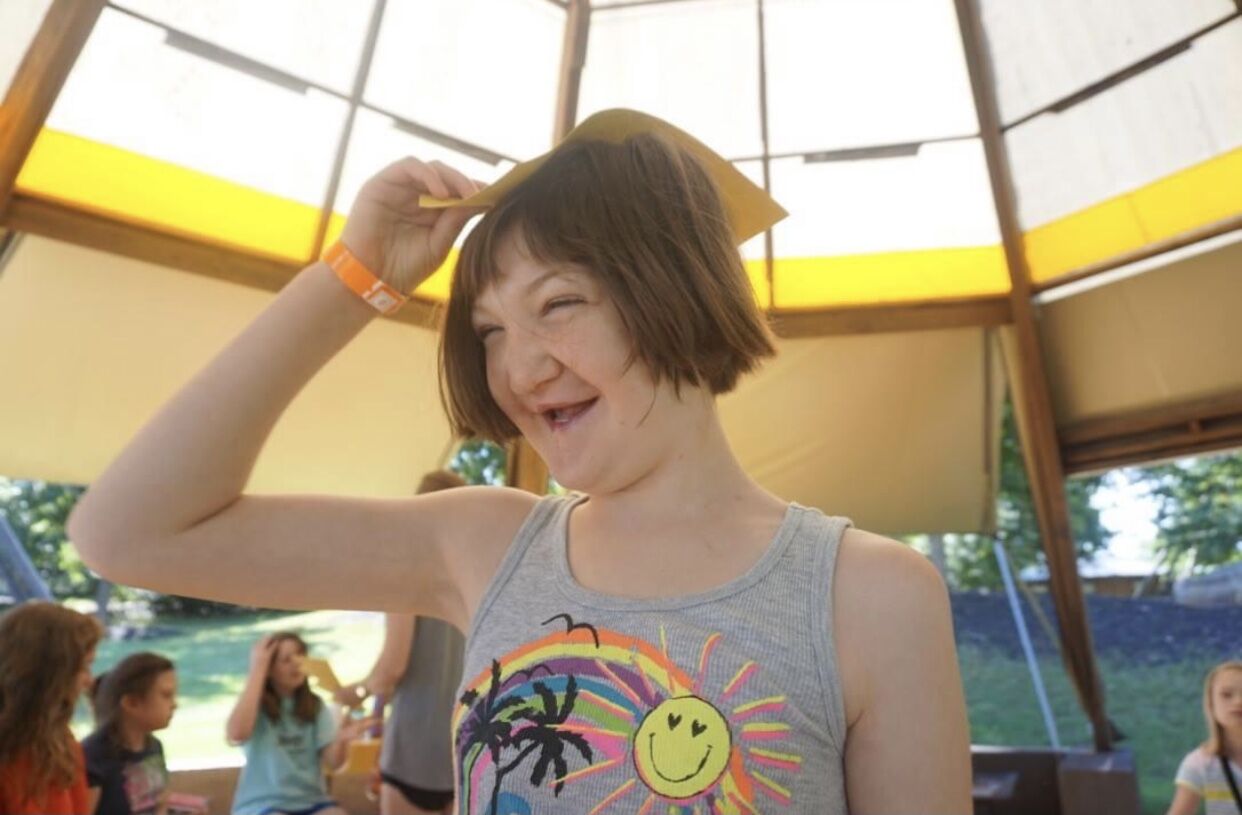 Hannah Mathews, 14, daughter of Dan and Heather Mathews, participates in one of the many summer programs at Camp Twin Lakes. After a coronavirus hiatus, the camp is resuming activities this summer. 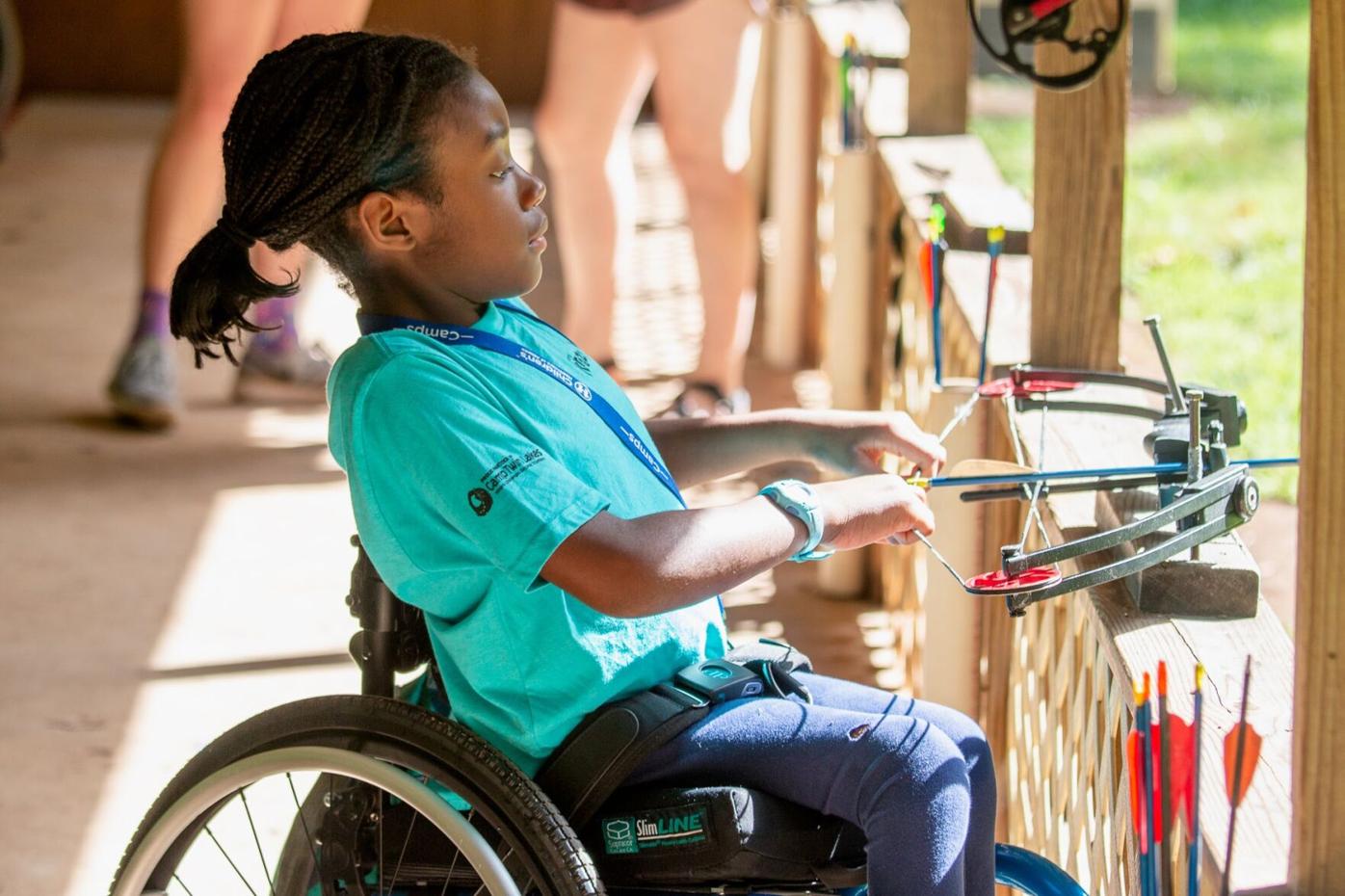 Krazy Legs Archery is one of the many outdoor activities available at Camp Twin Lakes. 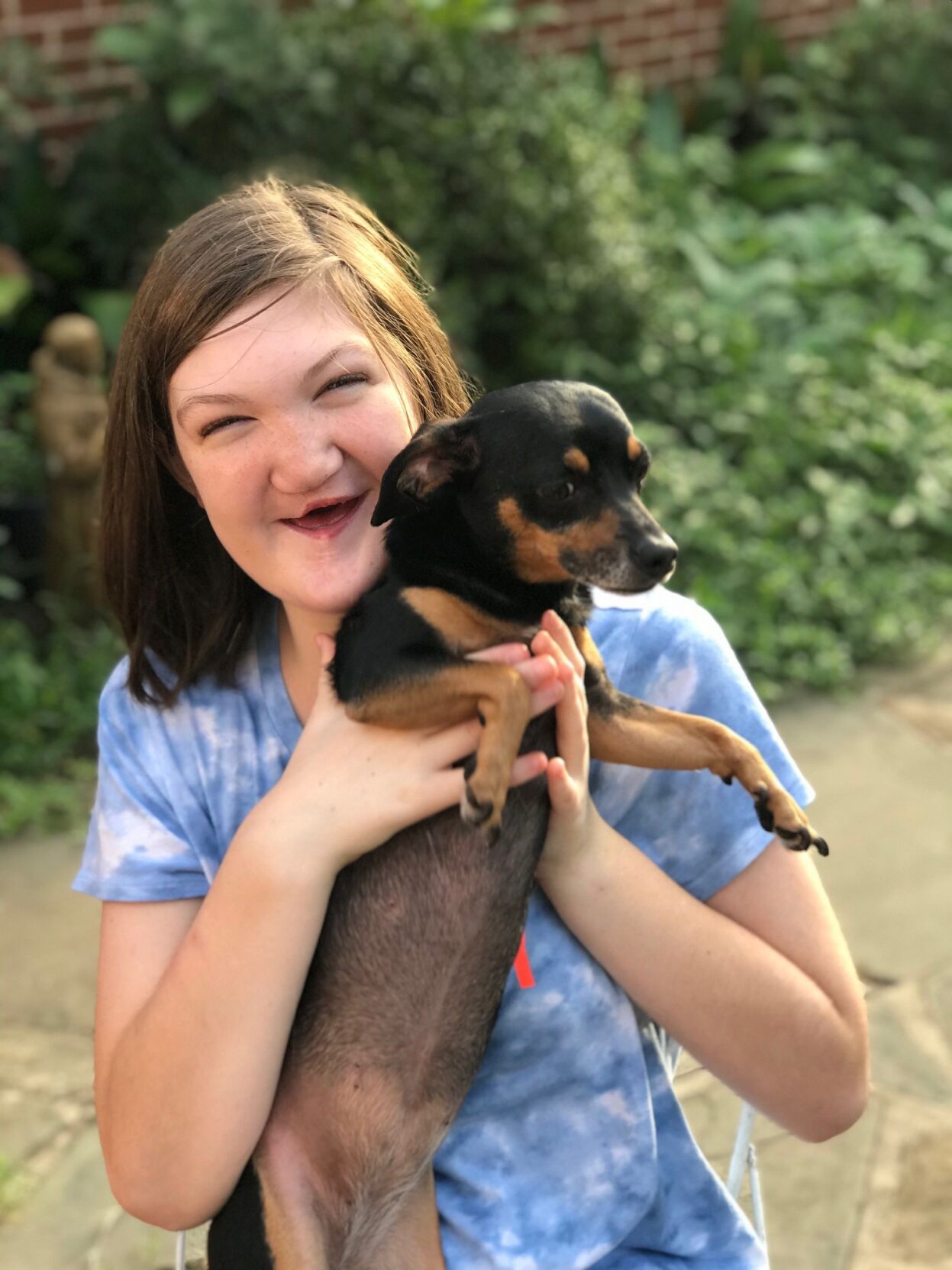 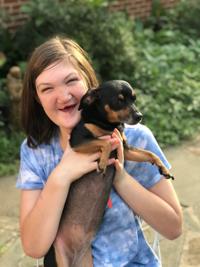 The ‘No Limb Ropes Course’ is specially designed to give campers freedom and opportunities at Camp Twin Lakes.

Dan Mathews, program director of Camp Twin Lakes, with one of the many motivational signs nailed on trees through the property.

Hannah Mathews, 14, daughter of Dan and Heather Mathews, participates in one of the many summer programs at Camp Twin Lakes. After a coronavirus hiatus, the camp is resuming activities this summer.

Krazy Legs Archery is one of the many outdoor activities available at Camp Twin Lakes.

To get to Camp Twin Lakes you hang a right off Kenchefoonee Road at the bright, sunny Camp Twin Lakes sign. You drive past the Greater Moses Baptist Church whose direction signs proclaims that the Morgan County church is Winning Souls for Christ.

Drive under a heavy shade cast by dense pine trees and you come to a parking lot. Walk down a trail and you literally are given a sign that this is a special place.

“Everything is possible. Even the impossible,” the sign reads.

It is like others nailed to trees around the property of the camp that annually takes in children with sickness or developmental disabilities and gives them a week or a weekend of nature and bliss and freedom.

“Kind heart. Fierce mind. Brave spirit,” another sign reads. The signs are written and constructed by both campers and staff when the whim strikes. They are inspirational and devotional. If a nail and wood and paint can bring the universe’s focus onto these delicate souls that briefly populate these grounds, then the rough composition and thought is practically holy.

And Dan Mathews knows it.

Mathews first came to Camp Twin Lakes in the late 1990s. He would volunteer two weeks of his time-off from being the director of therapeutic recreation for the City of Savannah to be a volunteer staff member for Camp Big Heart, an annual camp for children with developmental disabilities. He saw what the camp meant to these kids.

Mathews became Camp Twin Lakes program director in 2000 when the camp was operating on 120 acres that had been donated to Camp Twin Lakes by Georgia Pacific. The compound, which comes complete with, of course, two lakes, has 30 cabins, an art studio, a wild variety of outdoor activities including zip lines, fishing, a ropes course, putt putt golf, archery, baseball, boating and swimming.

In 2001, Camp Twin Lakes purchased another 180 acres from Georgia Pacific and in 2007, under the direction and urging of Madison’s Charles Baldwin, the camp purchased another 200 acres. That parcel is now a working farm that fronts Newborn Road and remains contingent with the rest of the property. “Baldwin Farm” has approximately 80 angus cows. “The majority of the acreage is in beef cattle,” says Mathews. The cows provide beef for campers. There is also an instructional garden with more than 100 varieties of plants for camper education and a production garden that grows tomatoes, cucumbers and other vegetables for campers.

There are goats, and three Alpacas, too.

“Today is a good day to have a good day.”Since it’s opening, Camp Twin Lakes has exploded in both campers and offerings. From the 1,000 campers that traveled to Rutledge in 1993 to the more than 10,000 annual visitors the camp receives now, Camp Twin Lakes has become the standard bearer for operating a camp for children with illness or developmental disabilities.

Camp Twin Lakes operates, Mathews says, on an annual $6 million budget. Approximately 70 percent of the budget is raised through various fundraising events. Partnerships with various camps helps cover the remaining 30 percent, Mathews says. Regardless, no camper is turned away.

“We operate through the generosity of our community,” Mathews says. Funds flow to Camp Twin Lakes, he says, in part because “people understand our mission. It’s an easy ask.”

That mission, in large part is to give a child the “opportunity to be like any other kid,” says Mathews. “And they do so in a safe place where everybody gets it.”

There is Camp Sunshine for children with cancer, Camp Kudzu for kids with diabetes and Camp Oasis for kids with Crohns and Colitis. It is May and soon, very soon, Mathews along with 35 summer staff members, mainly college students like he once was, will greet various camps for 10 solid weeks. During the year other groups with children utilize Camp Twin Lakes healing space approximately 30 weekends a year.

“Do the universe a favor and don’t hide your magic.”Mathews may be the perfect fit for this job. His mother Barbara spent more than 30 years in the Dekalb County School System as a special education teacher back in a time when children with developmental disabilities were treated differently both by educators and society. His father Henry worked with the Center of Disease Control and Prevention in Atlanta and spent time in Ethiopia in the 1970s doing malaria research and finding that he had a heart built to help refugee children.

Barbara, Mathews says, was “the kind of teacher that spent every night working on individual lessons plans for each child.”

“She literally brought her work home with her,” he says of his mother. “She had kids that she didn’t know if they were going to eat or not so she would bring them home.”

So Mathews learned. “Every week she would bring a kid home.”

“I was comfortable with kids with disabilities,” he says.

“She was very dedicated. That impacted me, certainly.”

“You have to survive the rain to get the rainbow.”In 2007 Mathews and his wife Heather welcomed the birth of their daughter Hannah.

Hannah, now 14-years-old, lives with Dan and his wife, who teaches at Eastside High School in Covington, at the family’s residence in downtown Rutledge. She is, Dan says, a precocious teenager who is well known in that small but special city.

She was also born with a brain malformation called holoprosencephaly. The malformation has affected her speech ability and created developmental delays. But she’s sociable, Dan says, and when she can be around people, happy.

She has made him better, he says.

“I had been doing this job a long time before she came along and it changed the way I do things.”

“You don’t know what you don’t know sometimes.”Dan says Hannah underwent five different surgeries as part of the holoprosencephaly diagnosis. And while the doctors and nurses were efficient and the surgeries were effective, communication and a level of humanity was sorely missing in the experience. Dan says he remembered prior to Hannah’s birth and his epiphany when families would bring their children to camp for the first time and he, and his staff, would try and shoo parents away so the kids could get settled. “We were impatient,” he says. The parents would give him a stare, or a glare of concern for their fragile child.

Since Hannah, he says, “we get that look.”

“If we had not had that experience we would not have known what that family needs,” he says.

“What Hannah has taught us is what so many families are dealing with.”

“Be yourself. Everyone else is taken.”Of the roughly 35 young people Camp Twin Lakes employs each summer over the years, more than 20 have become physicians. A host, Dan says, have become nurses. Others work in other fields where helping people is paramount. “We attract people who are into helping professions,” he says. “Our goal is to give those clinicians humanity.”

In June, Camp Twin Lakes is expected to announce another expansion, This time a $22 million improvement and growth for a facility that, annually, allows children to “be like any other kid.”

“Nobody sticks out because they’re bald or taking injections or are weak from chemotherapy,” he says. “They grow significantly in a week.”

So do their parents. Campers are given a week to learn joy, for sure, but also to learn “illness management skills that add to their independence,” he says. “It’s a real win, sometimes, for a kid to spend the night at grandmother’s house.”

With that win, when it happens, when there is that burst of joy and laughter and sense of belonging that erupts from a child’s face who has conquered a challenge before thought impossible, even for these brave souls, Dan says he never gets tired of the goosebumps. He never, he says, gets tired of the look on a staffer’s face when they realize they matter.

“They get to see,” he says, “what a difference they can make.”