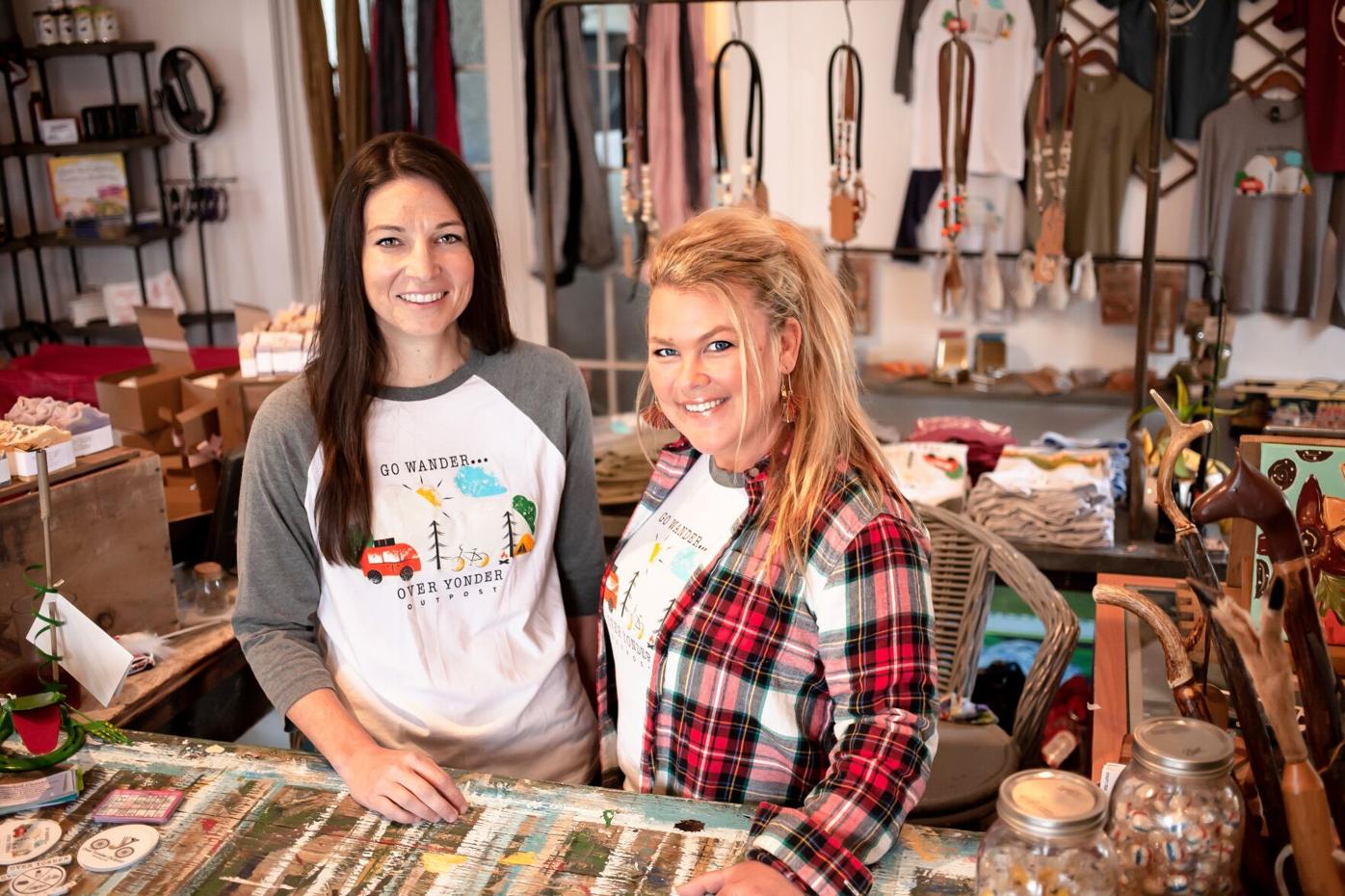 Co-owners of Over Yonder Outpost in Rutledge Sarah Ghann and Jen Buzbee inside their eclectic store on Fairplay Street. 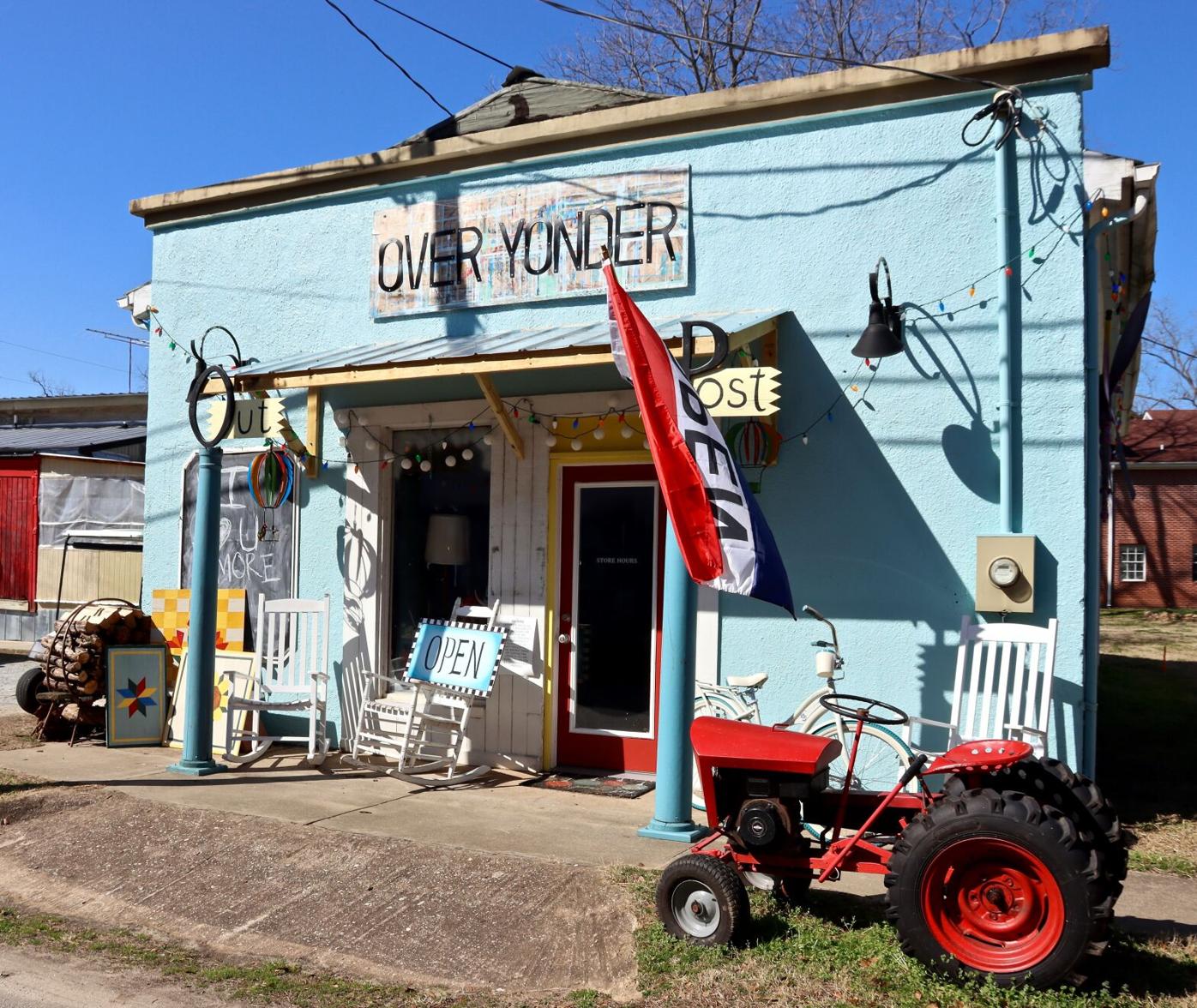 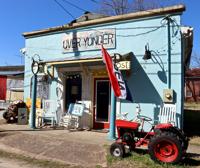 ‘Rusty’ the tractor sits outside the Over Yonder Outpost. The tractor only runs in reverse and is a favorite photo prop for children coming to the unique store.

Co-owners of Over Yonder Outpost in Rutledge Sarah Ghann and Jen Buzbee inside their eclectic store on Fairplay Street.

‘Rusty’ the tractor sits outside the Over Yonder Outpost. The tractor only runs in reverse and is a favorite photo prop for children coming to the unique store.

The former laundry mat turned artist studio that is now the home of Over Yonder Outpost in Rutledge is painted a brilliant sky-blue. The sign near the small store’s roofline was formed by Rutledge sculpture Blue Chilton on a backdrop of a board used by Rutledge artist Mollie Lenkowski to catch splatters of paint as she created her renowned floor coverings.

“Rusty,” an old miniature tractor that only works in reverse and is painted a brilliant red sits out front. Children love to play on the tractor says Over Yonder owners Jen Buzbee and Sara Ghann, and parents use “Rusty” as a photo prop.

During the Christmas holidays, Buzbee and Ghann sold Christmas trees outside their outpost and tagged each tree with a name. Two rough looking trees were named “Willie” and “Hank” and a tree that was only full on one side was named “Dolly.”

“We name every thing around here,” laughed Buzbee.

They are also fast becoming an iconic business in a town that welcomes creative concepts. Rutledge is filled with artistic energy and Over Yonder Outpost fits right in.

“We are a camping and outdoors store with a community twist,” says Ghann.

Inside the bright blue building is a wide array of locally-sourced jams, jellies, soaps and bat boxes. There is camping gear, seasoned wood is stacked neatly outside and Buzbee is particularly proud of the “Blackbeard” fire starter. “It gets wet wood lit,” she beamed.

Buzbee and Ghann are perched on Fairplay Street outside the entrance to Hard Labor Creek and with the store’s distinctive design, have been able to attract “day trippers” and campers going into the park. Once at the store, with its wide variety of unique products including the 1970s staple candy Zotz, there is something for every taste.

Buzbee and Ghann opened in November of last year in the middle of a COVID-19 shutdown and were embraced, they say, by the Rutledge community. “When we first opened, the community rallied,” said Ghann.

Both Buzbee and Ghann moved to Morgan County approximately six years ago. Buzbee said she and her family found Rutledge during one of the town’s “Music in the park” events.

“We moved out here and didn’t know anyone,” she said. Both Ghann and Buzbee went to high school in Rockdale County together and found each other again while camping, of course, and the beginning of a business idea began to take form. “We reconnected out here,” Buzbee said.

Already they have formed a women’s hiking group and daily, the entrepreneurs continue to find unique, locally-based items to sell out of the Outpost. Soon, they say, they are going to incorporate bike rentals, corn hole set rentals and fishing gear into their offerings. They’ve even got “a local kid” to agree to raise crickets for bait at the store.

“We hope to encourage people to get outside, to be outdoors and be with your family,” said Buzbee.

The Outpost has already become more than a nudge to the great outdoors. Situated next door to the Caboose, it is fast becoming an anchor on the north end of Rutledge. Last week, on a bright, sunny day, both Buzbee and Ghann took it all in while sitting in two white rockers on the store’s front porch.

“We’re both big in the community and want to do more,” said Ghann.

And now, said the bright, energetic Buzbee, “We know everybody.”