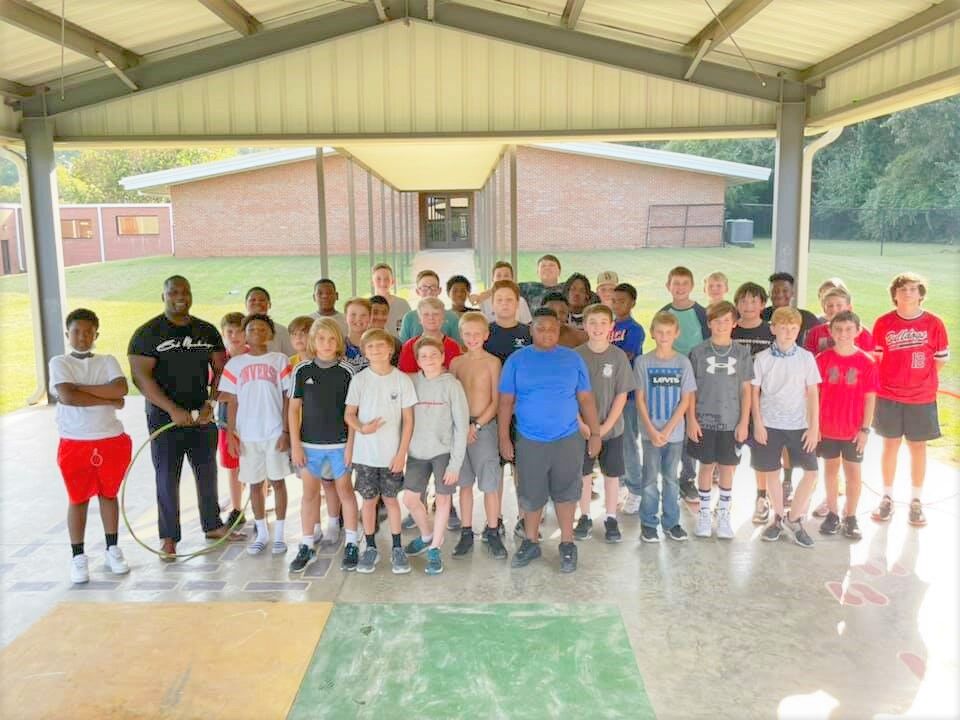 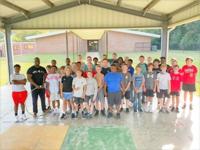 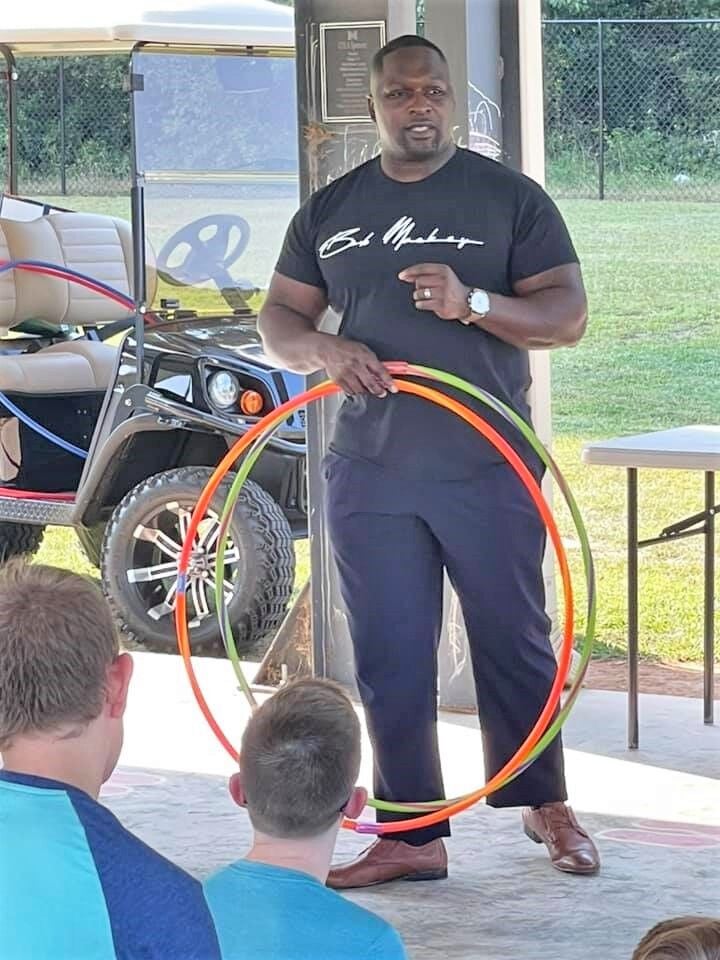 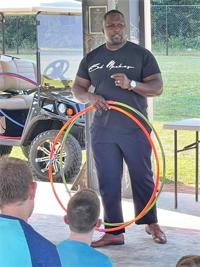 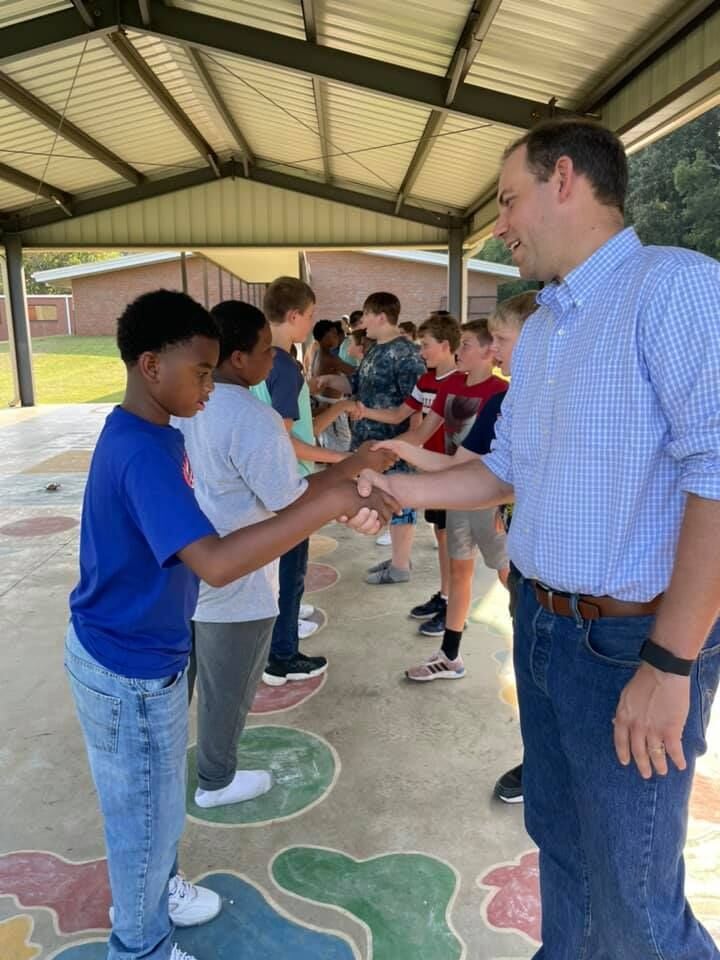 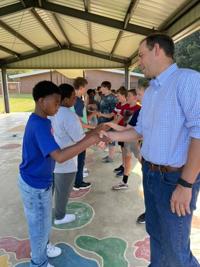 Todd Peaster, one of the founders of M-Powered, engaged with a Morgan County sixth grader during Monday’s meeting. 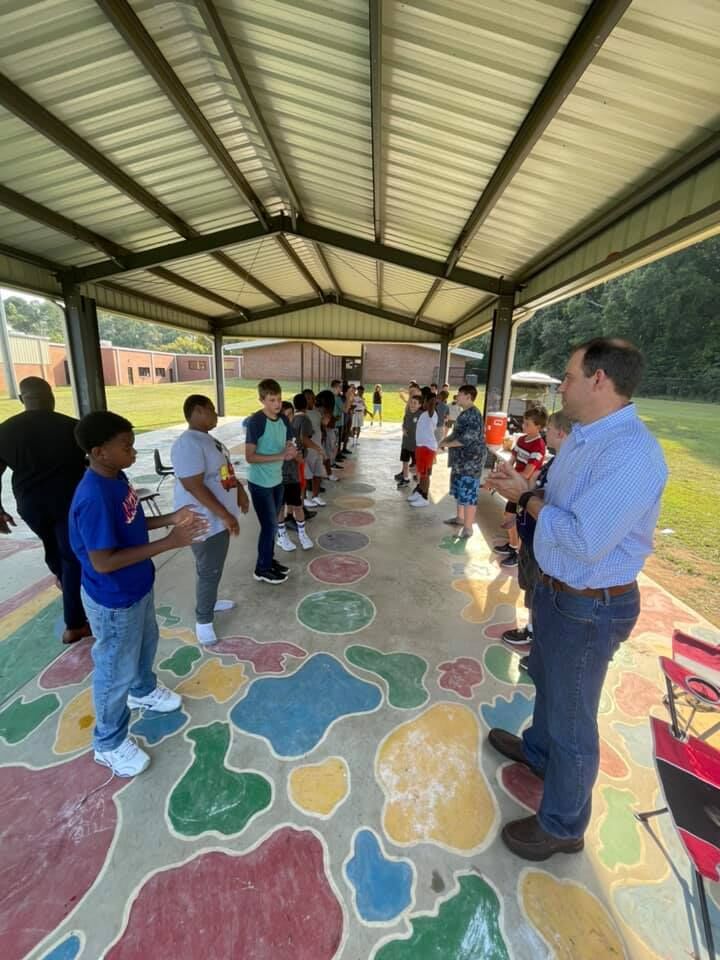 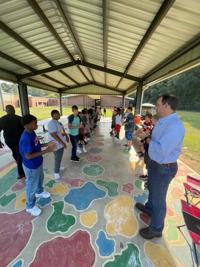 Todd Peaster, one of the founders of M-Powered, leads an activity with a group of sixth grade Morgan County boys on Monday, Sept. 13. 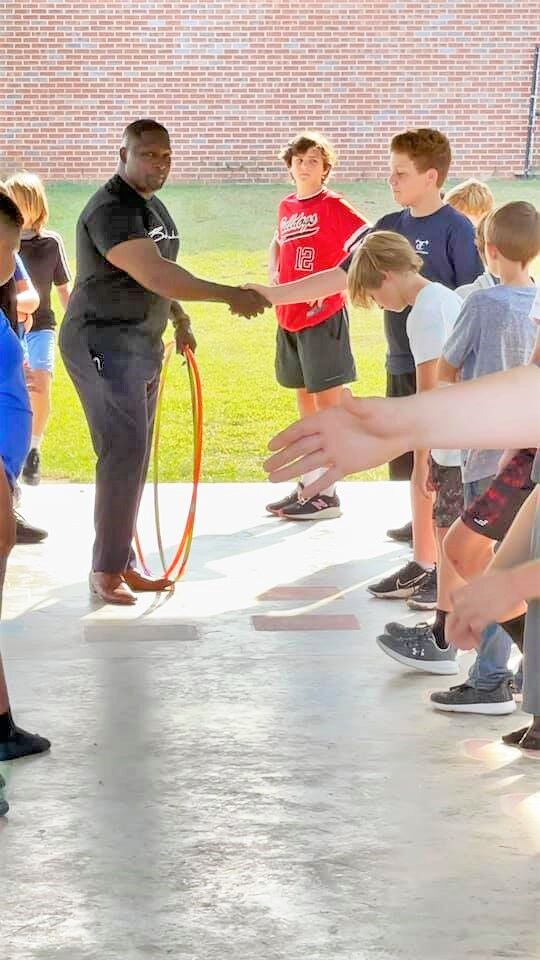 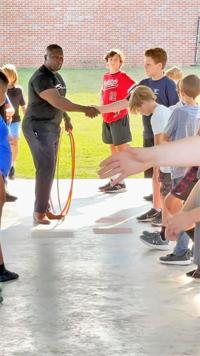 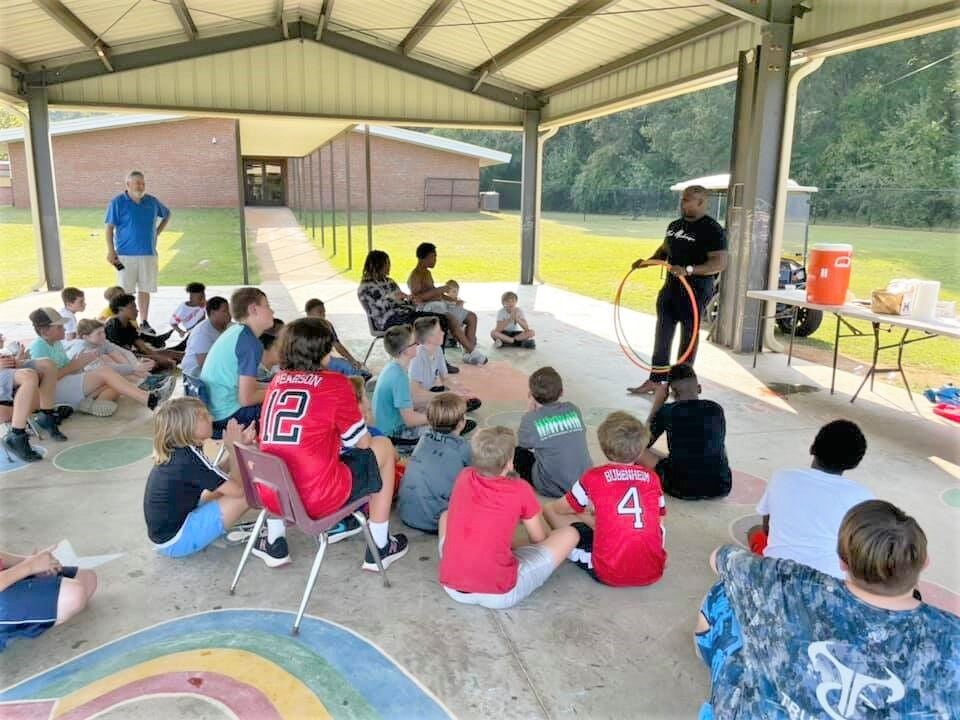 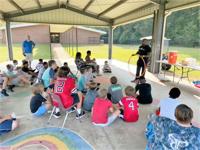 Todd Peaster, one of the founders of M-Powered, engaged with a Morgan County sixth grader during Monday’s meeting.

Todd Peaster, one of the founders of M-Powered, leads an activity with a group of sixth grade Morgan County boys on Monday, Sept. 13.

Bob Mackey, president of the Northeast Georgia Boys and Girls Club and inventor featured on ABC’s hit show “Shark Tank,” visited a group of sixth-grade Morgan County boys for an afternoon of mentorship with group M-Powered.

Mackey spent the afternoon conducting activities designed to teach boys how to conduct themselves with each other and the world, priming them for lives of success centered around respect, responsibility, and togetherness.

According to M-Powered Leader Lindsay Peaster, at each gathering, boys are encouraged to form friendships while eating together and engaging in various fun activities.

“These boys are coming from all different walks of life, socioeconomic statuses, and experiences. We want to provide an equal playing field for them to have a chance to get to know each other through unstructured time but also having a meal together,” explained Peaster. “We always have a guest speaker to expose them to lots of different men with various life stories, careers, and backgrounds who demonstrate characteristics of integrity, work ethic, and kindness.”

Mackey is an ideal choice to teach the boys due to his long-time work with the Boys & Girls Club and recent bout of success as an entrepreneur and inventor.

During Monday’s M-Powered event, the boys were shown clips of Mackey’s appearance on ABC’s “Shark Tank” in which the show’s savvy panel of investors offered a $150,000 deal to Mackey and his business partner, Michael Green, after the motivated pair pitched their invention the Yono Clip. The Yono Clip is a portable hook designed to hang personal belongings to prevent contact with germs and dirt. Mackey also shared tips on how the boys should conduct themselves while chasing their dreams and goals.

“The young men enjoyed watching his clip from being on ‘Shark Tank’ and learning about the three tests,” said Peaster, who runs the M-Powered group with her husband Todd Peaster.

Mackey taught the boys to abide by three “tests,” The Eye Test, The Vision Test, and the Performance Test.

The Eye Test pertains to dressing how you want to be addressed, demonstrating good posture and learning that first impressions are important. The Vision Test asks the boys to visualize themselves walking across the stage at their high school graduation and reminded them to keep their eyes on their goals. The Performance Test, in which the boys learned how to perform formal and informal handshakes, featured fun games to foster teamwork, encouragement, and the mindset of never giving up.

The Peasters spearheaded the mentorship program M-Powered in 2016, challenging boys to “engage, experience and encourage” because “together, we become M-Powered.” Over the years, the Peasters have collaborated with community groups, businesses, churches, teachers and parents to bring together sixth-grade boys each week to have fun, learn some life-skills and build up confidence, self-esteem and healthy relationships.

“One of our missions is to help foster, promote, and support healthy race relations among our boys and even us as the adults in their lives,” said Peaster in a previous interview. “It is meant to be a time for our sixth grade boys to come together, share a meal, play, and just be.”

The Peasters have adopted the tenants of the KA$H program, a system-wide initiative that stands for Knowledge, Attitude, Skills, and Habits, to incorporate into M-Powered. Ultimately, the vision is to serve as a support system for these boys as they grow up into men.

“This age is hard, plain and simple,” said Lindsay Peaster. “It’s a time that reputations start to be formed, a time when self-image and self-esteem may be challenged, friendships dissolve, and new ones are formed.”

According to the Peasters, after observing the beneficial impact of positive leadership qualities on students, they wanted to be more involved in positively shaping the lives of boys in the community.

“We started feeling led to do something, but for months, we didn’t know what that something was,” said Lindsay Peaster in the lead up to starting M-Powered. “After our country seemed to be torn apart with the news of shootings, and racial tension and hate were being spewed all across social media and on the news, we both just knew it was time.”

Five years later, the program is growing strong as boys come together each week for fun, friendship and to form crucial life-skills for the future.

“One of our hopes is that we can help build relationships not only across races, but interest levels as well. These boys are not all going to be best friends, but if they can learn to respect and appreciate each other, for the similarities as well as the differences, if they can learn that lesson now, it could impact them forever,” she explained.

The Peasters, originally from Macon, were high school sweethearts before marrying 20 years ago. Todd is a partner at Georgia Civil and Lindsay teaches at Morgan County Primary School with a P.H.D. in Special Education. The Peasters have enlisted their extended family to help with M-Powered. The couple has two boys, Harrison and Grant.

“We want them to know that there are adults in this community who think they are amazing and inspiring. More than anything, we want them to hear, believe, and internalize that they’re worth it,” said Lindsay Peaster. “The support from these boys’ families and the community has been overwhelming. They make it possible.”

By Tia Lynn Ivey managing editor If it takes a village to raise a child, then Madison is well-equipped for the task. A new mentorship program for sixth-grade boys called “M-Powered” has begun in Madison, challenging kids to “engage, experience, and encourage” because “together, we become M-Powered.” Local couple Lindsay and Todd Peaster spearheaded the initiative, reaching out to local community groups, businesses churches, teachers and parents to bring together sixth-grade boys each week to have fun, learn some life-skills and build up confidence, self-esteem and healthy relationships. “One of …