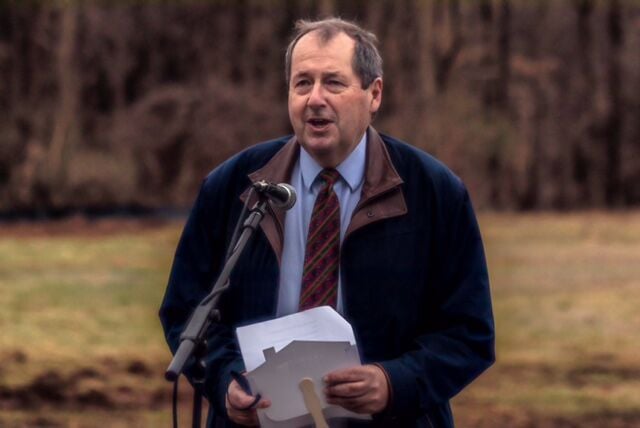 Denis Blackburne, senior vice president of the Woda Group, speaks at the Canaan Crossing, affordable townhouse community, groundbreaking in 2019. Blackburne appeared before the city council on Monday, May 9 to pitch the group’s newest affordable housing project, Carmichael Commons, a 60-unit apartment complex planned to be built inside the city limits. 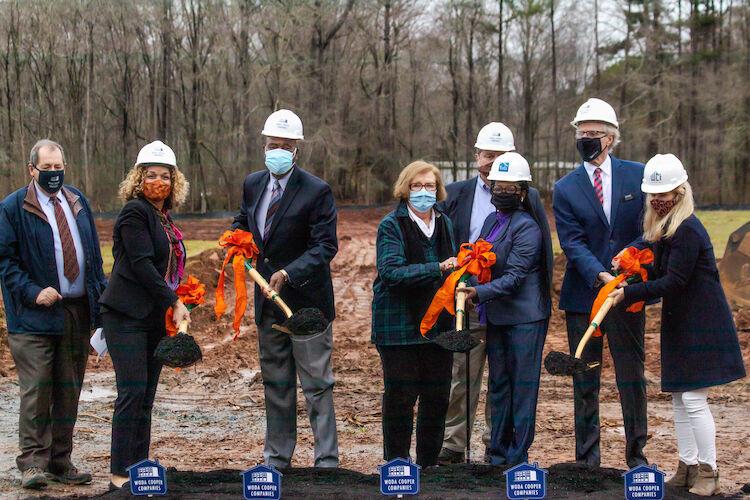 Madison Mayor Fred Perriman, Madison City Council members and representatives from the Woda Group celebrate the groundbreaking of Canaan Crossing in 2019. The city is partnering with the Woda Group again to bring a new affordable housing project to the city, Carmichael Commons, a 60-unit apartment complex.

Denis Blackburne, senior vice president of the Woda Group, speaks at the Canaan Crossing, affordable townhouse community, groundbreaking in 2019. Blackburne appeared before the city council on Monday, May 9 to pitch the group’s newest affordable housing project, Carmichael Commons, a 60-unit apartment complex planned to be built inside the city limits.

Madison Mayor Fred Perriman, Madison City Council members and representatives from the Woda Group celebrate the groundbreaking of Canaan Crossing in 2019. The city is partnering with the Woda Group again to bring a new affordable housing project to the city, Carmichael Commons, a 60-unit apartment complex.

A new $15.9 million affordable housing development may be on the horizon for Madison. On Monday evening, the Madison Mayor and City Council unanimously approved a zoning change to create a new Planned Residential District (PRD) to accommodate plans for a proposed 60-unit apartment complex inside the city limits.

City planners unveiled a proposed site plan for Carmichael Commons, which is planned for a 15-acre tract of land off Carmichael Road in Madison.

The project aims to bring sorely-needed affordable housing within the city limits, which would include a 4-acre neighborhood park deeded to the city and a new public roadway leading into the apartment complex. Rental rates would start at just $530 per month and would be determined by a tenant’s income.

Spearheading the project is the Woda Group, along with Parallel Housing, the partnership that brought Madison the Silver Lakes senior community development and Canaan Crossing, the 60-unit townhouse development to Madison to create affordable housing options inside the city limits.

According to Denis Blackburne, senior vice president for the Woda Group, Carmichael Commons will be a “mixed-income” community made possible through the allocation of federal and state Low-Income Housing Tax Credits (LIHTC) by the Georgia Department of Community Affairs (DCA). Blackburne told the city council that the use of LIHTC would not diminish the quality of the development which will be “modern” and in compliance with LEED environmental standards to ensure energy efficiency.

According to the city, “Residential units will offer high efficiency heating, ventilating and air conditioning, range, refrigerator, dishwasher, microwave oven, washer and dryer connections, luxury vinyl tile flooring, window blinds and ceiling fans. Site amenities will include an equipped computer room, a furnished fitness center and a central laundry facility. The leasing/management office will be prominently located on the site with on-site management. The property will also have a covered picnic area with tables and barbecue grills, a fully equipped playground and community garden beds.”

Mayor Fred Perriman, a long-time advocate for bringing affordable housing to the city, praised the project.

“It all began with Silver Lakes and you did a wonderful job there and then moved to Canaan Crossing and now Carmichael Commons. We thank you for picking our city,” said Perriman.

Councilwoman Carrie Peters Reid was also excited for the project to move forward.

“Thank you for even considering the city of Madison to come to and to do what you are doing. We really need workforce housing in our community and you are bringing it and it’s nice, nice looking and clean,” said Reid.

Councilman Eric Joyce also supported the project but worried about setting a precedent in changing the zoning from large-lot residential to a PRD to accommodate the project.

“I don’t enter into this lightly, anytime we increase density like this,” said Joyce. “But the benefits are so overwhelming — with the dire need for workforce housing in this community and it’s well located within our city limits.”

However Joyce warned that adjacent property owners shouldn’t assume the council would be as eager to rezone surrounding land for more density as a precedent.

Now that the zoning change has been approved by the City of Madison, the Woda Group will move forward with the competitive process to secure the LIHTC for the project.

“The property is applying for a Low Income Housing Tax Credit (LIHTC). It has been selected from several competing projects to receive the support from the Housing Opportunity Commission. The project will send its application into the state of Georgia by May 15, 2022.” said a statement from Madison City planning staff.

This is fantastic! Love that Madison is looking to continue developing low income housing. If you look on Zillow with what is available to buy a two or three bedroom, you’re looking at 300K with a 5.4% i street rate on the mortgage.

With the average earnings being around $50K per working age person according to the 2020 census, you’re going to need affordable housing to provide them that ability to eventually get into home ownership by saving money.

If the City of Madison wants to hire a sanitary worker for a $29,000/year salary, then we need to find them someplace to live where they won’t be impoverished.

There are no services available.