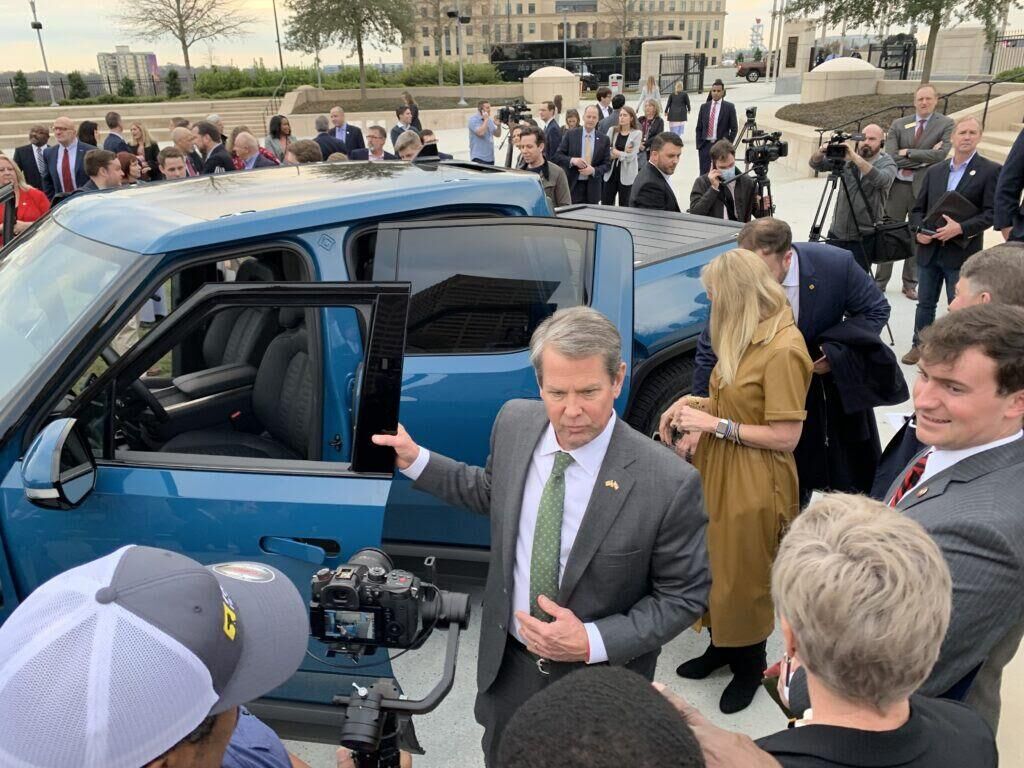 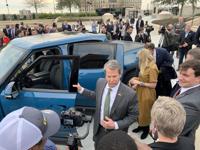 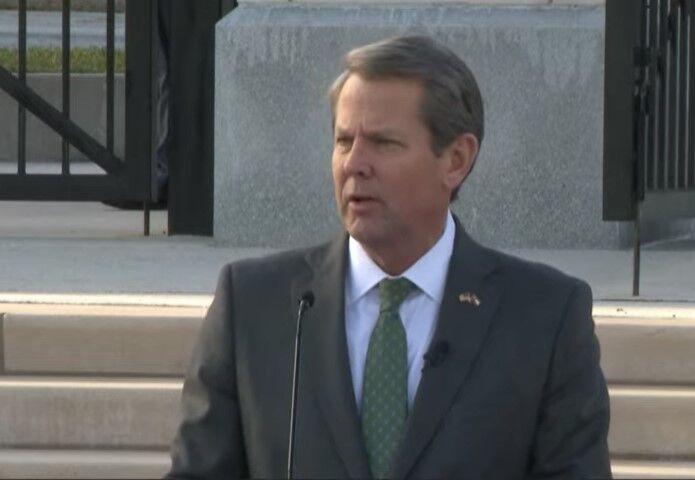 The largest economic development project ever in Georgia’s history will land right here in Morgan County and other surrounding counties that make up Stanton Springs.

Georgia Gov. Brian Kemp announced today a historic multibillion dollar deal with Rivian Automotive to develop a massive electric vehicle manufacturing plant sprawling across nearly 2,000 acres of land between Rutledge and Social Circle, known as Stanton Springs North. The plant will be built between Exit 101 at the I-20/Highway 278 Interchange and extend down to Old Mill Road in Rutledge, to be partially built upon the old Verner Family Farmlands.

“As of today, Georgia’s success story has a new chapter: the single largest economic development project in the state’s history,” said Kemp from the steps of the State Capitol. “We are so proud to welcome Rivian to the great state of Georgia.”

After months of speculation and rumors, Kemp confirmed that Rivian Automotive, an electric vehicle manufacturing company worth $100 billion, will indeed build its second plant in Georgia, yielding a $5 billion investment, creating 7,500 high-paying jobs, and churning out an estimated 400,000 electric vehicles per year once the plant becomes fully operational. Construction is slated for the summer of 2022, with manufacturing beginning in 2024.

During Thursday’s press conference, Georgia officials praised the deal with Rivian as a win-win for Georgia’s economy and environment.

“Rivian is a unique company. Their vision for a sustainable future is one we share as a state,” said Economic Development Commissioner Pat Wilson.

Jerry Silvio, who sits on the Joint Development Authority, the four-county board tasked with overseeing the development of Stanton Springs, welcomed Rivian to Stanton Springs, praising the company as the perfect fit for the region.

“Rivian will be the JDA’s third major business within Stanton Springs and we know it’s the right location for this new facility,” said Silvio. “Your commitment to the community and environment is in alignment with our goals of the JDA.”

Helen Russell, the Chief People Officer at Rivian, pledged that the company would put employees and the well-being of the environment first.

“We couldn’t be more excited to be here today to announce Rivian’s decision to come here,” said Russell. “We will be able to capitalize on the depth and breadth of the talent here in Georgia… Rivian exists to combat climate change. Our mission is to keep the world adventurous forever and the even bigger vision to leave the world in a better place than any of us found it.”

According to Russell, Rivian believes in flattening corporate hierarchies to ensure equitable employee packages in which all workers are valued, treated with respect, are paid well with lucrative benefit packages, and even own a slice of the company.

“As a publicly owned company, each and every employee owns a piece of Rivian,” said Russell.

Kemp thanked all the state and local officials who played a role in recruiting Rivian to Georgia, as well as former Governors Sonny Perdue and Nathan Deal for “laying the groundwork” in the areas of education, workforce development and utility infrastructure investments in the last 20 years to make the Rivian deal possible. Kemp said the new mega-deal reinforces Georgia’s running title as Number 1 State in the Nation for Business.

“We are so proud that Georgia will now be home to Rivian’s largest manufacturing facility,” said Gov. Kemp. “This single investment — the largest in state history — represents the future of automotive manufacturing and establishes the leading role the Peach State will play in this booming industry for generations to come.”

According to a press release from Kemp’s office, construction on the facility is expected to begin in summer 2022, and the start of production is slated for 2024.

“The entire project will support the expansion of the U.S. electric vehicle industry and will serve to decarbonize the transportation and energy sectors. Rivian is the latest success in Georgia’s push to recruit the entire electric mobility ecosystem to the state,” according to the release. “In August, Gov. Kemp announced the launch of the Electric Mobility and Innovation Alliance, a statewide initiative between government, industries, electric utilities, nonprofits, and other relevant stakeholders focused on growing the electric mobility ecosystem in the state and strengthening Georgia’s position in electrification-related manufacturing and innovation.

“In addition to bringing new investments to the state, Georgia is committed to ensuring the state’s existing industry and accompanying 55,000 automotive manufacturing jobs receive the support for retraining and expansions needed to transition to meet the new demands of electrified transportation.”

Rivian has also scored a deal with Amazon to develop a massive fleet of electric delivery vehicles and has earned praise and accolades for the company’s new electric truck.

“Rivian will now join two revolutionary leaders in their respective fields to make east Atlanta a beacon of technology and employment potential,” said Silvio. “The Joint Development Authority of Stanton Springs began over 25 years ago with the goal of creating high-tech, regional-focused jobs for generations to come. Through the years, the four counties and our utility partners have planned strategically to ensure minimal impact on the local environment. With Rivian’s announcement today, the continued collaboration between the State of Georgia, the JDA, and now Rivian will be unprecedented.”

According to the Governor’s Office, “Rivian’s strategic location on the I-20 corridor will enable the company to access resources and speed its products to market. Offering 1,200 miles of highway and 5,000 miles of rail, Georgia is equipped to move product quickly and efficiently. Further, with investments such as the newly opened Mason Mega Rail Terminal at the Port of Savannah, which is the largest on-terminal rail facility in North America, Rivian will be able to efficiently tap into supply chain needs.”

Rivian’s just under 2,000-acre parcel will include abundant natural space. Open job postings in Georgia will be immediately available at www.rivian.com/careers. Inquiries about project RFIs, RFPs listing, and supply chain outreach can be directed to georgia@rivian.com.

“To further assist the company with its workforce requirements, Georgia Quick Start will build and operate a state-of-the-art manufacturing training center that will provide Rivian with a fully customized training program that meets the company’s start-up needs. This will also build capacity and curricula within the Technical College System of Georgia to maintain a long-term pipeline of highly skilled employees who are trained specifically in these operations. In addition, the Georgia Department of Labor will assist the company in identifying and recruiting workers,” said Kemp’s office.

“Rivian’s decision to locate in Georgia will have a tremendous impact on the entire state,” said Georgia Department of Economic Development Commissioner Pat Wilson. “As I have said, we will see more change in the automotive industry in the next 10 years than we have seen in the past 100, and with this announcement, Georgia will be home to one of the main drivers of this transformation. Rivian will be an outstanding corporate citizen and community partner, and we look forward to a strong future together as the jobs and investment they create will change lives and accelerate Georgia’s sustainable and electrified future.”

Gov. Kemp hints at historic deal with Rivian Automotive, rumored to be headed to Morgan County

Could Morgan County be home to a massive new electric vehicle plant?

Could Rutledge be the site for Stanton Springs’ next massive expansion? The “Small, But Special” community may soon have a multibillion dollar…

During a Rivian Town Hall meeting in Social Circle Tuesday night, economic developers faced a tough crowd full of skeptical locals against the…